We are in Paris, but that will be the subject of the next blog. This one is about Madrid and some final thoughts about Spain.

Madrid is magnificent. The metro area has a population of over six million (similar to Washington), but the city itself is four times the size of DC with over two and a half million people. And in both Valencia and in Madrid there is no such thing as single family housing and suburban neighborhoods. Except for some of the older neighborhoods, where there are some two or three story, ancient townhouses, everyone lives in apartments of seven to twelve stories, similar to the scale of the multifamily buildings in DC. Also in both Madrid and Valencia, there is an abrupt line between the high density apartment neighborhoods and farmland, a “hard edge” as it is called in planning circles. Public transportation is prolific and reliable. Graffiti persists in Madrid as it does in Valencia but seems somewhat more under control. 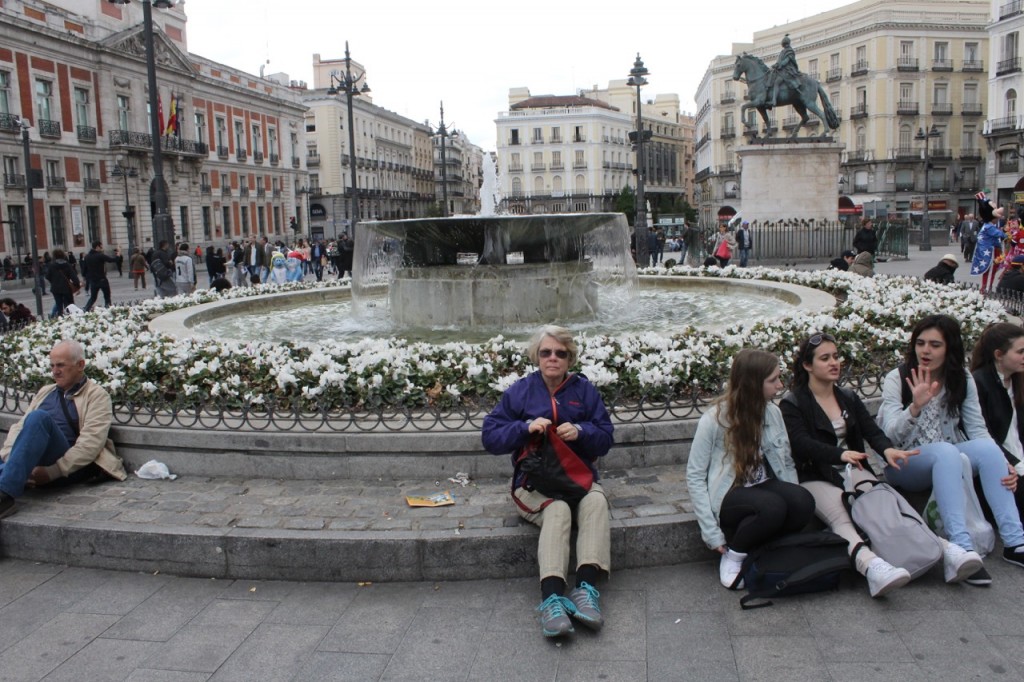 The big difference between Valencia and Madrid is the energy level. Madrid seems like New York City with its crowded streets and jammed sidewalks. While there are a handful of Medieval neighborhoods, most of modern day Madrid was built and rebuilt during the eighteenth and nineteenth centuries, and it has a monumental feel to it. Several large plazas near the center of town are the scene of 24 hour activity with bands, clown acts, people in weird costumes, gypsies begging for money, old men with buckets and wands producing huge bubbles, women who look like prostitutes, smoking cigarettes, wearing short, short blue jean pants, spiked heals, lots of weird makeup and died hair, and thousands of people mulling about seemingly having a good time in a frantic but also paradoxically laid back atmosphere. Being in the middle of all this is like being in a huge carnival.

Our hotel was at the center of it all; but instead of being a tourist hotel as I had expected, it was a hundred room boutique, bed-and breakfast hotel with small rooms and the most beautiful lobby I have ever seen, with an extraordinary bar, fireplace and library, a true oasis and relief from the hustle of the street outside. If you ever go to Madrid, stay there: the Hotel de la Reina at Gran Via 22. 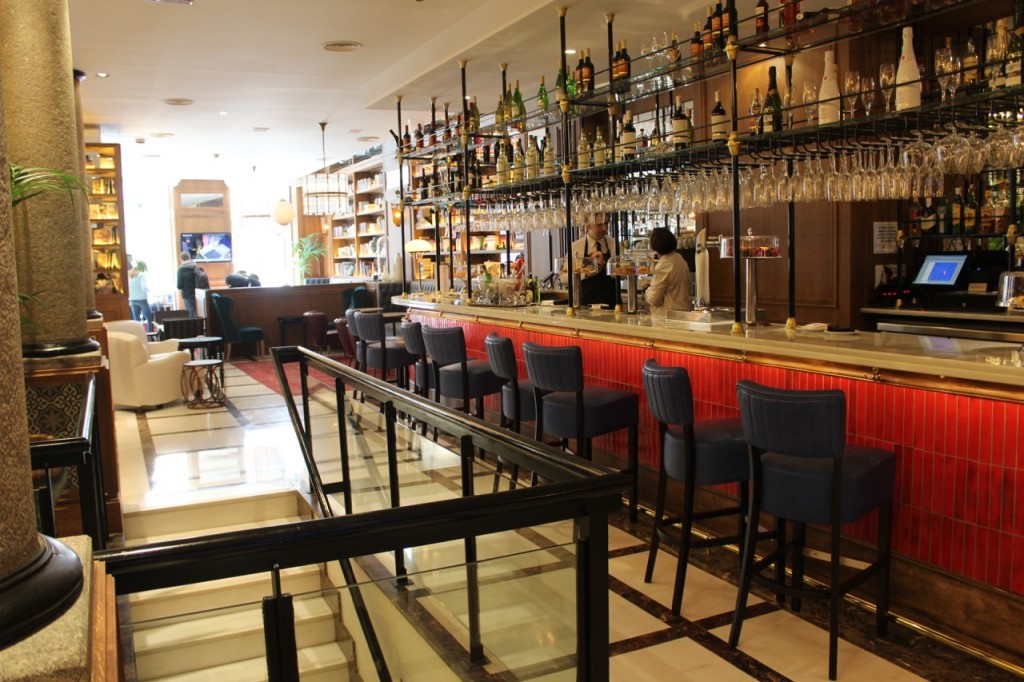 Our big mistake was not allowing for more time in Madrid. You really need at least a week; but we crammed about as much in as we could in two and a half days—a hop-on, hop-off bus tour, a walk through the royal gardens (a lot like Central Park), a guided “free” walking tour of the old city (tips accepted) and fashionable 3:00 pm lunches at two terrific spots—one, La Tasquita de Enfrente, world class. And we attended an evening dinner show of Flamenco music and dancing. Naturally we visited the Prado, which has a collection of Renaissance paintings that few other museums can match. But we did not see the dozen or so other important museums, the royal palace or some of the other spectacular parks and gardens. Madrid is on our list of places to return to. 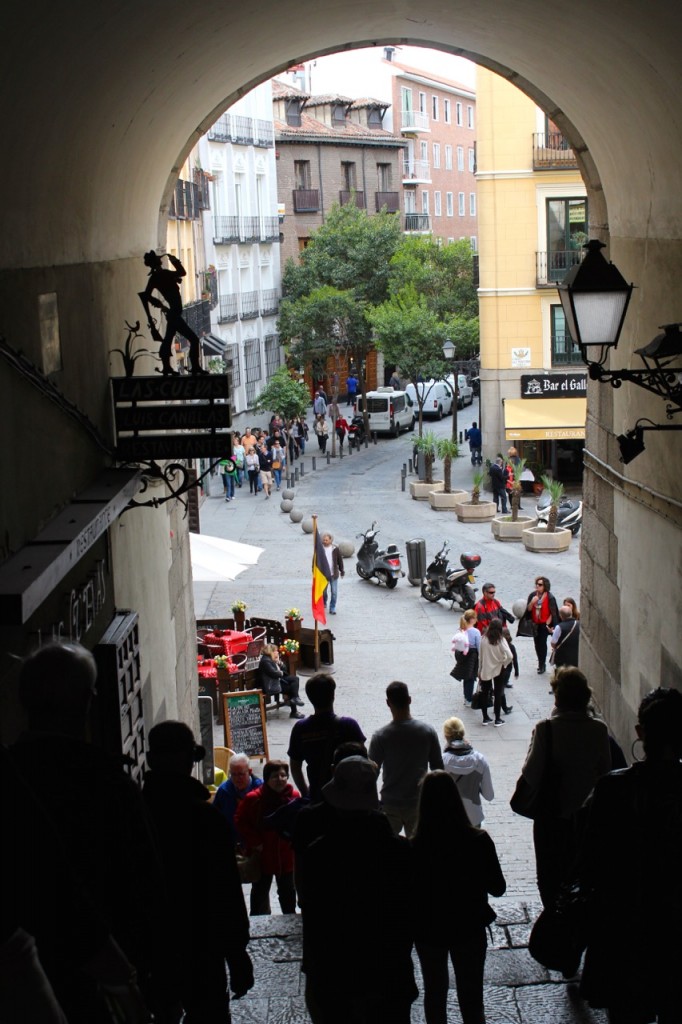 I have talked about the friendliness of the Spanish people despite our language barrier. (In Madrid many more people speak English than in Valencia; and there are many American and British tourists, so language is not as much of an issue.) As an example of how nice most people are, our cab driver headed off in the wrong direction when taking us to the Flamenco show due to Embry’s giving him the wrong address. The street name ended in an “a” instead of an “o” as was written on the paper she handed him. The “o” address was ten miles away. By the time we realized there was a problem we had run up almost eight Euros on the meter. He slammed on the brakes, turned around, reset the meter to zero, and headed back in the right direction, writing off the eight Euros as a business loss—and without a single complaint. What are the odds of something like that happening in Washington? (A generous tip helped a bit, but still…)

So Spain ranks very high on our list. The history has been mixed: vast empires: Roman, Visigothic, Moorish, and then unification under the Christian monarchs, Isabella and Ferdinand, followed by a 100 year history of world dominance. But the empire came at the expense of the Moors and the Jews, and there was the Spanish Inquisition, the Crusades, the Civil war and Fascism under Franco that are blots on Spanish history that have still not been thoroughly reconciled and remain controversial up to today. Today there is a multi-party constitutional monarchy that retains some aspects of the “old right” (church, monarchy) and “old left” (socialism); these divisions that go back for centuries still exist, as played out in the parliamentary system.

There also seems to be a wisdom and maturity that comes from such a long history and knowing what it is like to be on top and then over time see it all slowly vanish like sand spilling between your fingers. They look at us and perhaps hope we make the best of the time allotted to us….