We have just completed a day in Ulan Ude, the capital of the region of Burjatia, which is where most of the Mongolian people in Russia live and for this reason has a strong Asian influence and feel to it. It seems a bit poorer and ragged around the edges, however, but still is a vibrant city of around 500,000. We enjoyed seeing a very impressive folk concert featuring both Asian dances, Russian Cossack songs (featuring “throat singing”) and music on a primitive stringed instrument. We also attended a Russian Orthodox church where a service was in progress—packed house (all standing, diverse ages) and enough chanting, singing (excellent choir), incense, bells and whistles and regalia to put our High-Church-Lite All Souls Episcopal Church in DC to shame. Embry got to see this, not me, and said it was one of the most remarkable experiences of the trip so far. I would simply add that having a service like this in Russian rather than English is a strong satisfaction enhancer. Later we visited a Buddhist temple, also with a service in progress presided over by six monks in red robes, chanting prayers to another full house, this time all Asian looking. Lunch was in an upscale 11-story hotel on the top floor with a revolving restaurant, another example of the many contradictions in this ethnically diverse and incongruous country. 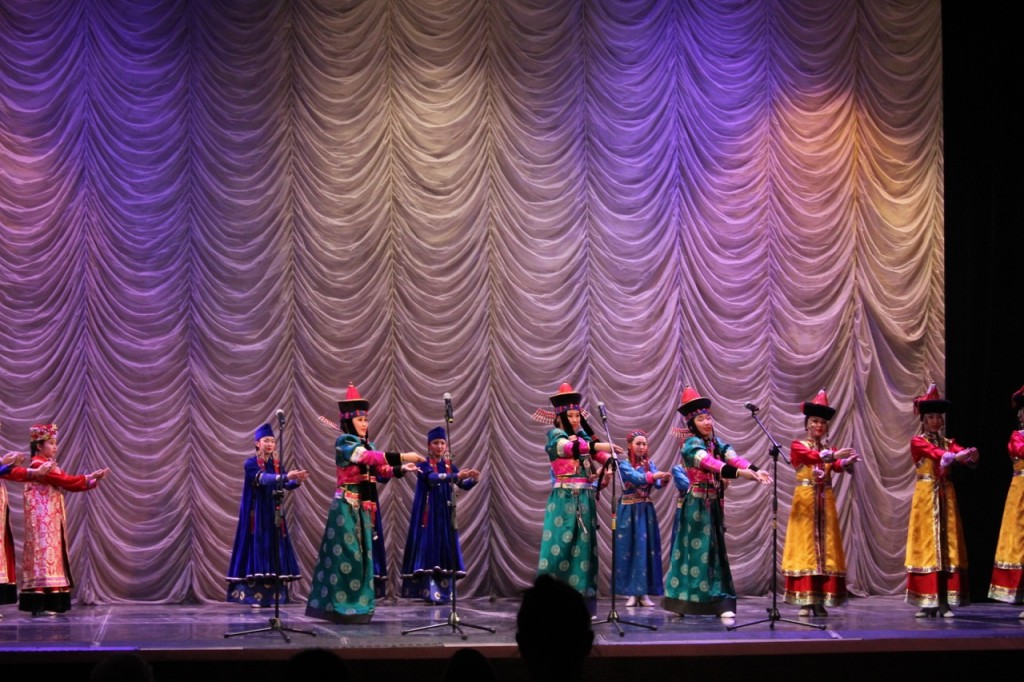 The journey from Irkutsk to Ulan Ude was memorable for several reasons. First we traveled by bus from our hotel respite night in Irkutsk (Courtyard Marriott, lousy food) along the Angara River (the only river flowing out of Lake Baikal) stopping along the way to visit an outdoor museum consisting of old, wooden buildings created by the pioneers and settlers of Siberia. What became apparent during this visit is how the US and Russia both share a frontier heritage. The settling and conquest of this vast area happened about the same time that the West in the US was settled. The houses looked remarkably similar to the cabins built by settlers in the US, and the primitive implements like plows, millstones and rough hewn furniture also looked the same.

Our local guide talked about the bad rap Siberia has gotten over the years for being known only for its cold and inhospitable winters and for its gulags. While the winters are cold and the summers hot, the area is extraordinarily beautiful with its snow capped mountains, vast planes, wild rivers and deep and endless forest, “the Taiga.” Most important, she said, was that the use of the area for political exile came rather late in its development, and for a long time it was the only region in Russia that was “truly free.” Serfdom was never permitted in any of Siberia, and until the political exiles began happening under Czar Nicolas I in the early 1800s, the people attracted were mostly independent, hard working and industrious. Many of the early settlers became trappers, traders, hunters and farmers, and some became wealthy. The indigenous nomadic population, the Buryaits, were largely ignored or pushed aside. In contrast to European Russia, however, it was largely a classless society. 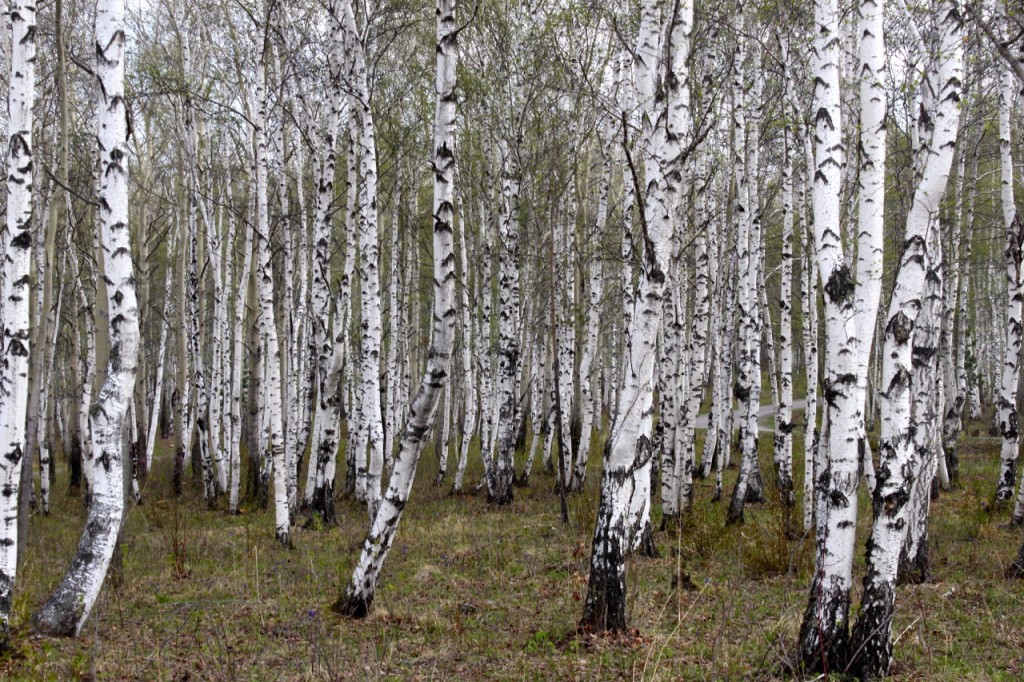 While the czars sent dissenters here, it was not until the Soviet period—from 1920- 1952 being the worst– that the word gulag and Siberia became synonymous. Reportedly over two million in work camps at any given time and almost twenty million political exiles in all.

The wild West frontier in the US has shaped our character and our values as much as just about anything, and I suspect that may also be true of Russia. Our guide told us that of all the groups she takes on tours of Russia, the US tourists are far more like the Russians than any of the Europeans. She says we tend to have a similar sense of humor and to relate to people in similar ways. Perhaps the two frontiers—the West for us and the East for Russians—has played a role in this. Another similarity is that Russia had serfs and we had slavery. Both institutions were terminated in the 1860s and left legacies both countries are still dealing with.

The second reason that the journey was special was Lake Baikal. This lake contains more fresh water than any other lake in the world, about 20% of all the fresh water on the planet. It is several hundred miles long, on average about 40 miles wide and about a mile deep. There are hundreds of species not found anywhere else on the planet including the world’s only fresh water seal. Over 35 million years old, it is by far the oldest lake in the world and is still widening albeit slowly, several centimeters a year.

The day was warm and partly sunny but also fairly hazy so you could barely make out the towering snow capped peaks on the eastern side. After visiting the local market, we said goodbye to our bus and boarded a ferry, which in 45 minutes deposited us on the eastern shore at a small and somewhat decrepit port. The lake was calm and the ride uneventful. At the port we boarded our train again and set off on an old and partially abandoned railroad track alongside the lake. 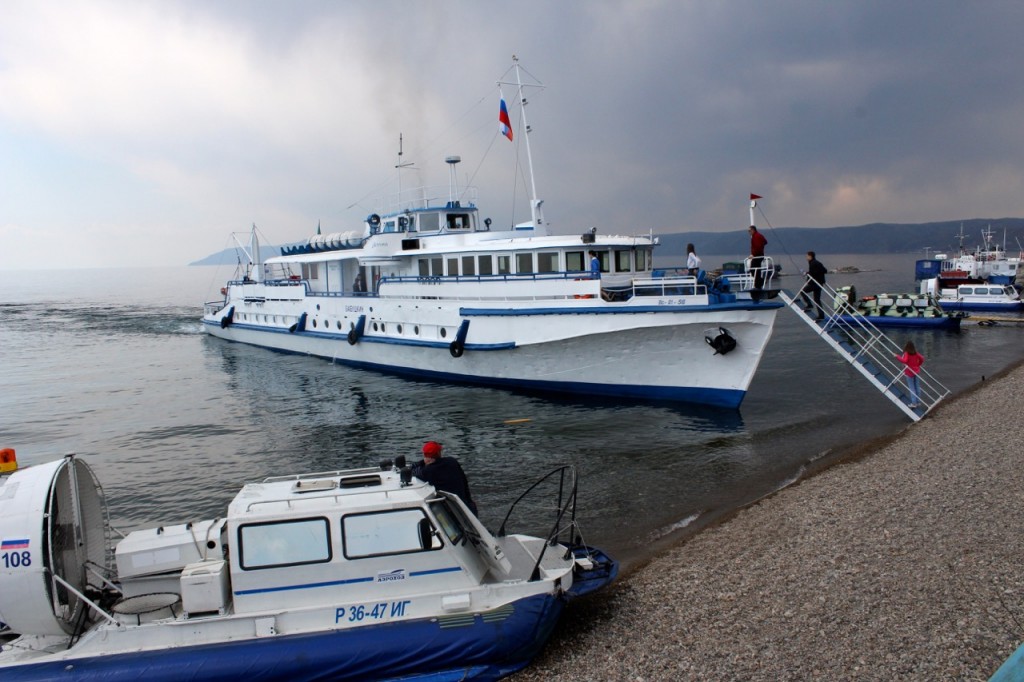 Of course, many may recall that we were in the Lake Baikal area in the summer of 1993 when Andrew and his Russian friends at “Friends Travel” arranged a tour for us and a group of our friends to the remote Lake Baikal Nature Preserve, a pristine forest very close to where our ferry landed. That trip was as different in accommodations and tourism style as you can get but also just as much fun as this one and still ranks highest on my list of great adventures.

But that was then and this is now. We are 22 years older and the world has changed. Russia has made progress but is still struggling through the privatization period and is now flexing its muscle in new directions, which leaves the West—and most of the Russians we have talked to– perplexed and anxious, not knowing where it is all headed.

On the famous Great Siberian Odyssey of 1993, we forged flooded streams on makeshift bridges of fallen trees and ended up getting out of Siberia by flagging down a converted troop carrier and paying them to drive us over 100 miles to Irkutsk (since rail road bridges had been washed out). On this trip those who wanted (which included me) were invited to board the locomotive engine and ride in open air alongside the lake, gripping the safety rail like mad. We were supposed to stop for a picnic, but because of rain had to settle for a stop to allow brave passengers to take a dip in the 40 degree water of the lake. Out of close to 100 people, twelve people took the plunge. Most were Germans but our Robert was the only American. More on Robert –and other members of our tour group–to follow in the next blog. 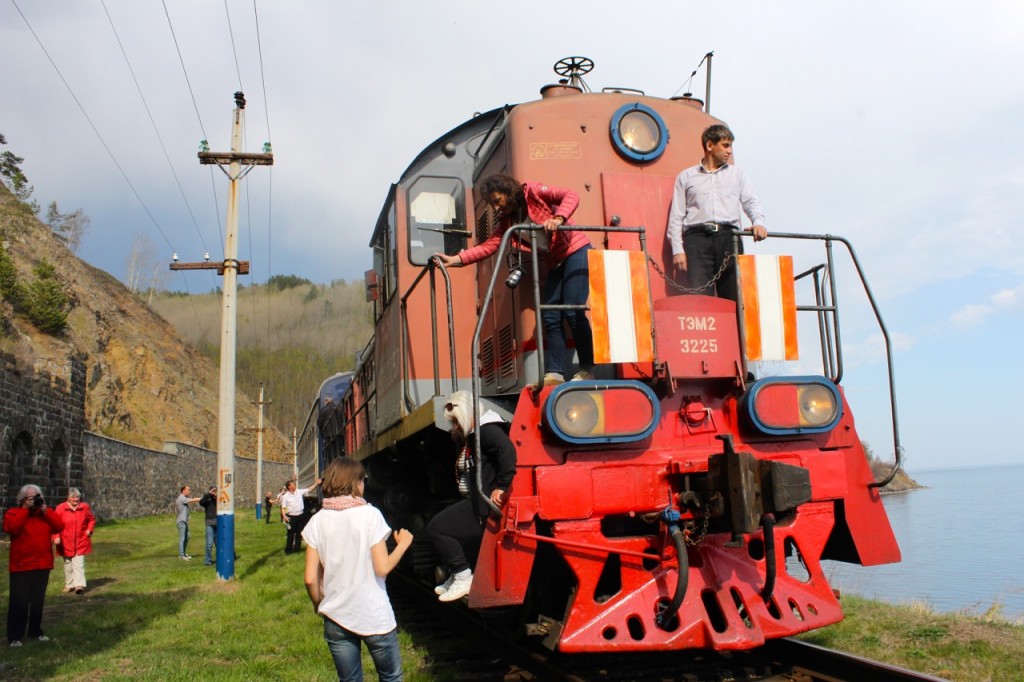