This past week, Embry and I were in Maplewood, NJ, where we had grandparent duties while Andrew and Karen were off skiing in Utah. Sadie is in the eighth grade and her brother, Parker, is in the seventh. It was a great week being with them; and during the day when they were in school, we even managed to get into Manhattan to see Sondheim’s “Company” on Broadway and to spend another day visiting the Museum of Modern Art. Because of their busy schedules (1.2 mile walk to middle school, leaving at 7:30 AM, and not getting back until dinnertime with afternoon cello lessons, piano lessons, viola lessons, tennis practice, and play rehearsals, followed by homework in the evenings), we mainly got to spend time with them at dinner or when driving them to and from afternoon activities.

However, we got to see a lot of Gimli, their five-year-old Golden Doodle.

Actually, Gimli has a lot more Poodle in him than Golden Retriever. He has wooly gray  hair , and he does not have the laidback personality of a Golden Retriever. However, he is very intelligent, friendly, likes people, can be cuddly, and is loved by the whole family. You could say in many ways he is the perfect family dog.

Except for one thing. Gimli has a problem with other dogs.  The challenge comes when it is your turn to walk him. He often lurches unexpectedly after other dogs, especially large, male dogs.

He is also very strong and strong-willed; and when he makes up his mind to go in a certain direction when you are walking him, it takes all the strength you can muster to stop him. Given the dog’s strength, it occurred to me that maybe this might be a job for the grandchildren. When I asked our teenage grandchildren if they could walk Gimli, the reply came back that they would like to walk Gimli, but it was kind of dangerous. I thought, if it is “kind of dangerous” for a teenager, what about an 80-year-old grandfather.

I did a quick calculation: Embry and I were facing about 15 dog walks. What were the odds we would get through this unscathed?

In Maplewood, the answer would be close to zero. My estimate is that every house in this close-in, New York suburb of 25,000 people has at least one dog. It is close to impossible not to see a dog if you stand on the front porch and look hard in both directions. It is asking too much to think you can make it around the block without encountering at least one four-legged animal on a leash.

The key to our survival was to have a game plan for each walk. This involved scanning right and left down the sidewalk when leaving Gimli’s yard. If you saw a dog in one direction, then you went the other way. Once underway, if you saw a dog on a leash on your sidewalk, you immediately crossed to the sidewalk on the other side. Andrew and Karen had also rigged up a kind of bridle that seemed to help keep him from lurching if you pulled really tight. When Embry and I walked Gimli together, Embry came up with the idea of standing in front of Gimli and blocking his view of the other animal. That seemed to work pretty well most of the time. We survived the week pretty well, only around a have a half dozen lunges and no physical contact.

The closest call that I had was during the middle of the week when I was walking Gimli by myself.  I knew that trouble was near when I felt a tug on the leash, heard a low growl from Gimli, and then a loud, angry bark as Gimli turned and looked behind us. It was a man walking a German Shepherd, fast approaching us. Parker had warned me to stay clear of German Shepherds. I yanked Gimli across the street only to come face to face with a giant Husky on a leash held by a man, who clearly was not amused. Where did that dog come from? Where to go? What to do? Suddenly, when an Amazon Prime truck appeared on the street in front of us, it got Gimli’s attention. After the truck had passed, when I looked to the spot where the German Shepherd would likely be, the owner and dog had disappeared, a situation which permitted us to dart back across the street and avert the Husky encounter. Crisis avoided. But what could have happened to the German Shepherd? Another one of life’s small miracles.

The big question is why Gimli behaves the way he does. When not in conflict with other dogs, Gimli is the ideal pet—smart and loving. He is a great dog! But on a leash when confronting another dog, he is the quintessential Alpha Male, King of the Roost, Tough Guy, Macho Man. I thought, “Jekyll and Hyde.” What is that all about?  Then I realized that he can’t help himself. It is part of his DNA. The poor animal is doing his best. This is just the way he is.

We humans are a lot more complicated than dogs. But we, like dogs, are also part of the animal kingdom. Sure, we have clawed our way up to the top of the food chain but also have lunged, lurched, and barked at other human beings in ways far worse than Gimli. Why do we treat our fellow humans this way?   Like in Gimli’s case, we could argue that we poor human animals are doing our best. It is just the way we are.

But in this era where one critical mistake or miscalculation could start a nuclear war, where we are watching global warming change the planet in alarming ways, business-as-usual is not the answer. We have to do better. The next big fight we get ourselves into could be the end of us. Like Gimli, we have two sides—a loving, accepting side and an aggressive, hostile side. The challenge is how to nurture our better side and keep the demonic side at bay. Our life as a species could depend on it. 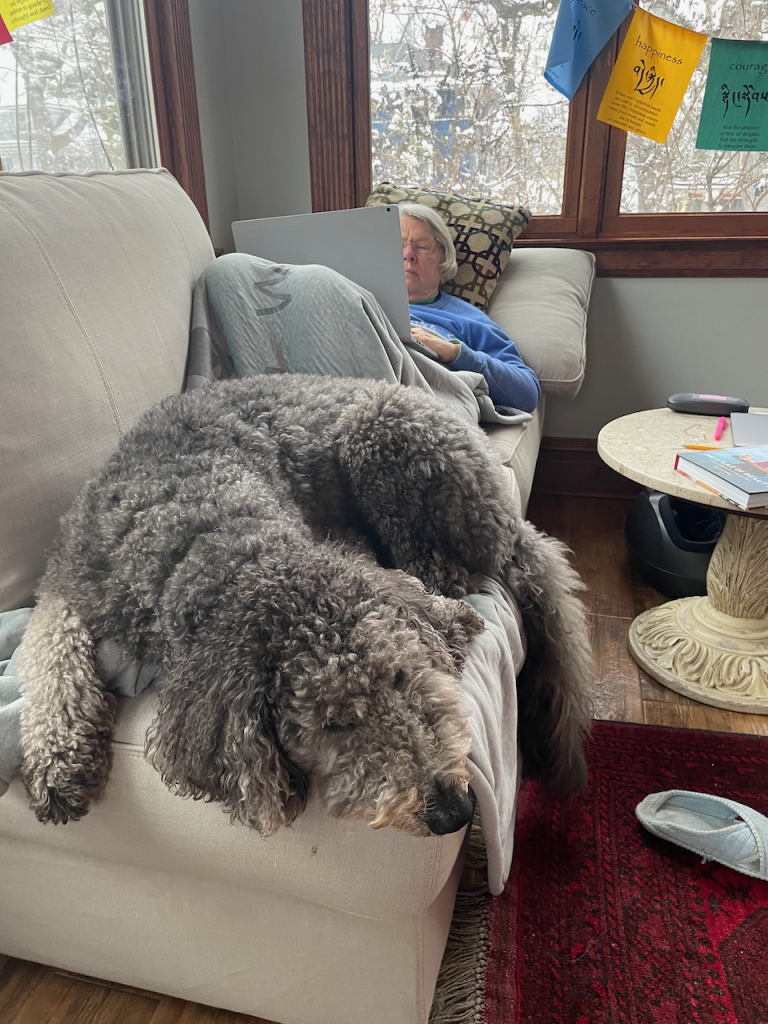