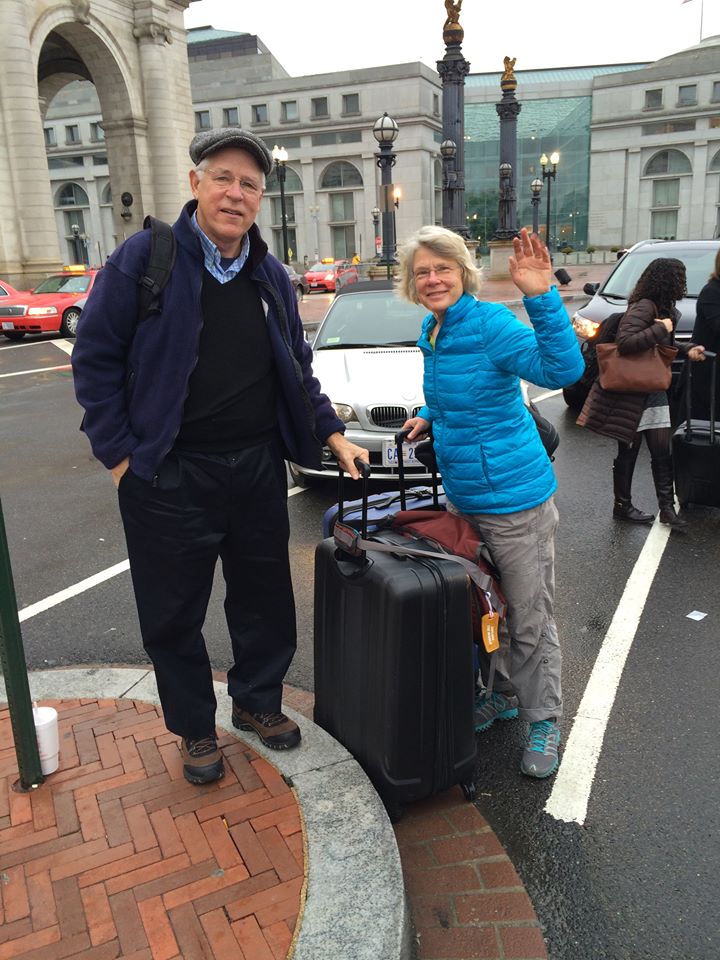 When Jessica arrived at our house at 5:oo pm yesterday to take us to the train, for the first time I felt a sense of panic. “Oh my God! This is it! We are really doing it. All the planning and preparation . What have we forgotten? What is in store for us? Four months and 25,000 miles on trains and ships. Are we out of our minds?”

Embry was ecstatic, beaming from ear to ear. This had been her idea from the beginning, an adventure she had been thinking about for years except her initial thinking (fantasy) involved hopping on “tramp steamers,” and using only third class hotels and public transportation. When I signed on a couple of years ago, the plans were upgraded accordingly , so now the trip includes a healthy dose of first class accommodations while still providing for a container ship Pacific crossing and plenty of opportunities for adventure and stories.

After a one hour delay, the Silver Meteor barreled into Union Station, and we boarded at 8:30 in a chilling drizzle. “Out of Dodge, baby,” I muttered. Enough of the Inside-the-Beltway blues. Time for a much needed break.

The first big question was just how bad the Amtrak experience would be. We were already an hour behind schedule, and the train looked pretty beat up and worn out.

I remember the last –and only–time we took an overnight train to Savannah about ten years ago, when the woman next to us choked on the first bite of a cheeseburger, then screeched, “What is this?” The cellophane wrapping was still on the cheese, and she had just swallowed a large chunk of it.

We checked our two big bags (a source of apprehension for me as to how we will handle these 50 pound monsters) and made our way to one of the sleeper cars where we were greeted by William, a graying, middle age steward with long hair, a slight Hispanic accent and a friendly smile. He got us situated in our tiny but compact cabin and advised us that he had made reservations in the first class dining room for us and that the meal was free. Remembering the cheeseburger incident—and because we had already eaten in Union Station—we opted for a beer and a glass of wine in the lounge and turned in for the night. Not a bad start.

The next morning we were awakened by Christmas carols. Now this is mid March , mind you. How tacky. The carols were not that bad, a choir of men and boys sounding much like the Cathedral choir. But not now, not in spring. Well, it was Sunday. Maybe this was the closest thing Amtrak had to church music. I tried turning off all the speakers to no avail. Christmas carols playing for the entire 12 remaining hours would be enough to send me to the looney bid before we even got started. Naturally we complained to William, pleading with him to stop the carols, for God’s sake. He gave us a puzzled look, which confirmed that the shabby service of Amtrak was alive and well. On the way to the dining the insidious music continued. As we waited to be seated, I noticed people we were staring at me with the same disgusted look that I must have had. We were all sick of this music, and the conductors were doing nothing about it. Outrageous.

Then Embry turned to me and whispered, “Check your iphone.”

I pulled it out of my pocket.

The sound got louder and the iphone screen read, “The Choir of Saint John’s College: Christmas Favorites.”

I frantically squeezed the off button and closed it down . The passengers in the dining car returned to eating their breakfast.

The rest of the trip went well. Since the train costs more than flying, it is somewhat amazing that anyone takes trains anymore, but the Silver Meteor was full; and the service was generally good, the food (lunch and breakfast) edible—well, at least the breakfast. There were a number of families and several father and son couples, who I imagine were coming down for spring training baseball or maybe Disney World.

And there are many good reasons to take the train rather than fly. You marvel at the sunrise over the marshes surrounding Savannah, the Spanish moss hanging from Live Oaks, the estuaries meandering through the swamps, the modest homes along side the tracks with people in overalls (white and black) sitting out on front porches, rocking in mid day shade. You don’t see this kind of stuff at 38,000 feet. Maybe we will eventually tire of seeing the world in slow motion, but for now anyway, it is a good way to start.