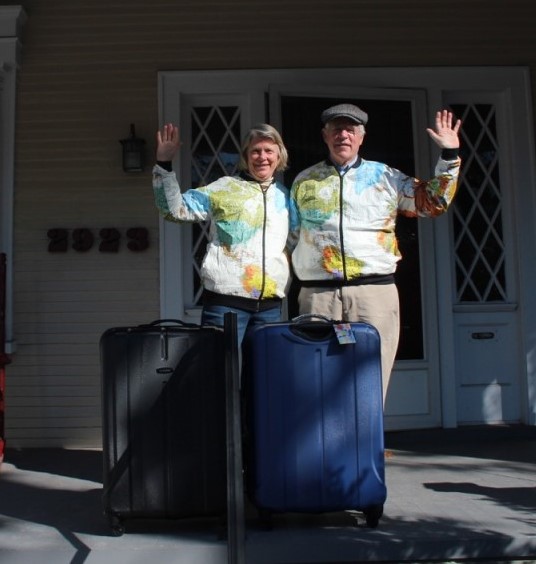 So how do you go about planning  a trip around the world without using  airplanes?

We began about a year ago. Without using planes you have three basic options–the Southern Route, which would take you through the Southern Hemisphere and to many exotic and developing countries but also would involve a lot of water and time at sea. Then there is the Silk Road which takes you through such delightful and interesting spots as Iraq, Iran, Afghanistan and Pakistan. Not such a great idea right now. So we decided to opt for the Northern Route which takes you through central Asia.

Once you have a basic route then the next questions are how you get across both oceans and across central Asia, and do you focus more on China or Japan.

We lucked out by being able to book on a  cruise ship leaving the Caribbean for summer cruises in the Med. The central Asia crossing really has only one option–the Trans Siberian Railroad. The Pacific is the most challenging.

Our first choice was to spend several weeks in Japan and depart from there, but ultimately we ended up choosing China because there is essentially no way to get from Japan to the US by ship. (There are occasional speciality cruises but none that fit our schedule, and cargo ships are not allowed to take on passengers in Japan.) Similarly there are few if any cruise ships from China to the US, but there area a  bunch of container ships. After a good bit of work we decided to go with the Maris Line mainly because they were the only shipping company which would even agree to a date of departure. Since we locked in several months ago, we have already been assigned to five different container ships; and as of this moment there is no assurance when the most recent one–the Hanjin Ottawa–will actually depart. “Don’t worry,”emailed Maya, my new friend at Maris, “We have a lot of ships leaving Shanghai (mostly to Seattle) and we’ll get you out.”  Container ships carry thousands of tons of cargo and a handful of paying passengers, who could be described as  very small containers with arms, legs and a mouth. Guess who wins that one.

So once you have three three big pieces settled (crossing the Atlantic on a cruise ship in transit from the Caribbean to the Med, crossing central Asia on the Trans Siberian Railroad, and crossing the Pacific on a container ship),you are ready to fill in the blanks. We used two very good travel agencies for this, one specializing in Europe and the other in Asia; and given the number of times we have had to make changes, I am sure they lost money on us, but they have stuck with us. We highly recommend D’Lane Maselunas (Europe, Atlantic crossing and Siberia) and Asia Trans Pacific (first Japan and when that fizzled, China).

Getting visas for China, Russia and Belarus (transit only) is another story, but that will have to wait. We got our Russian visas yesterday and are promised the Belarus transit visa tomorrow. In the nick of time, as they say.

There are a bunch of moving parts in this adventure and lots of opportunities for “minor adjustments,” so stay tuned…