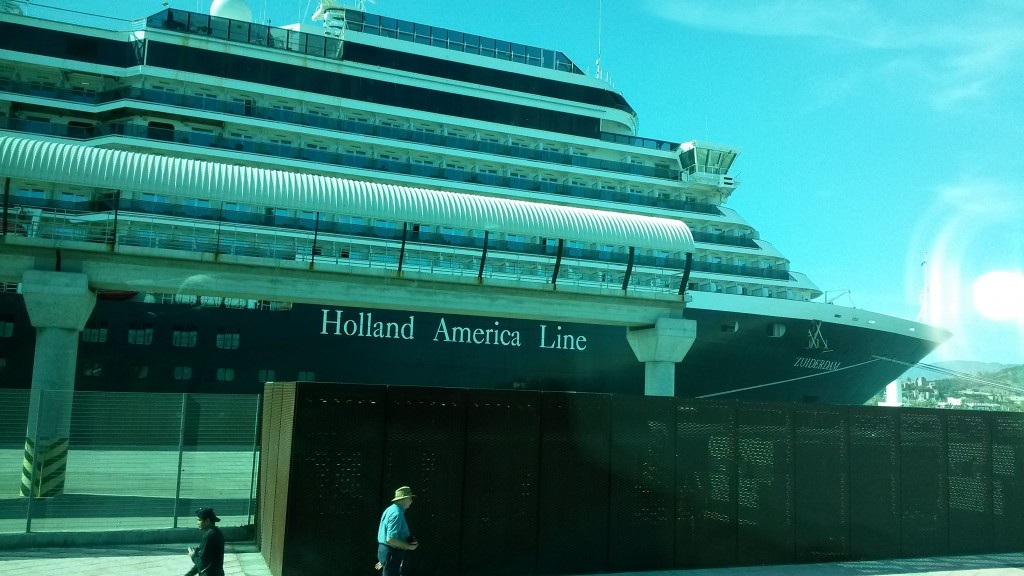 We are on what will be our last complete day at sea. We made land fall at Madeira at 8:00 am yesterday, some 3,000 miles from Ft Lauderdale, spent the day ashore exploring the mountainous island and are now on a two day voyage which will put us in port at Cadiz , Spain tomorrow morning. A day on shore there and then a day of night sailing followed by a shore day in Malaga and we then arrive in Cartagena on Palm Sunday, March 29, the beginning of Holy Week. Our Atlantic crossing will have officially come to an end.

So not much has happened and a lot has happened, just like it always is when you are at sea.

The days have been pretty much the same—30 knot head winds and partly cloudy skies, temperatures in the low 60s– with more activities and more food than most people could possibly consume in any 24 hour period. Some might say a lifetime.

So here is a brief summary of the cruise ship leg:

It actually is surprisingly satisfying. I say “surprisingly” largely because (as I noted before) of my innate bias as a sailor against big ships. Before this cruise I tended to disparage everything about cruise ships. I now look down from the deck outside our comfortable cabin at a 40 foot sailboat headed out into 35 knot head winds, towering waves and spray everywhere and ask, “Are those guys nuts?” Actually we have not seen any sailboats on this voyage, so it is a hypothetical observation, But you get the point.

The most satisfying aspect of a big ship Atlantic crossing is settling into a relaxed routine, which adds new meaning to the term “low stress.” The big decisions are whether to eat in the main dining room or the casual buffet on the upper deck or whether to work out in the fitness center or do a powerwalk around the deck, to see a movie or watch a live show, to have a drink at the jazz bar or the piano lounge, to use the hot tub or the sauna, to do yoga or Pilates. I mean these are really tough decisions.

The second most satisfying thing is the general atmosphere aboard the vessel. It is the friendliest place I believe I have ever been– mainly because all crew members always smile and always speak to you, no exceptions; and they all seem to really mean it. “Good morning,” “good afternoon,” “have a good day,” “hello, sir” come out of the mouth of every employee regardless of how high or how low they are on the totem pole. I do not know what kind of hospitality training they have Holland America, but they should sell it to everyone on the planet. I honestly believe it would change the world. For example, after a day or two most passengers who otherwise would go to great lengths to ignore strangers find themselves instinctively greeting one another and wishing each other a good day. Lunch or breakfast with fellow passengers you have never met has always been pleasant and enjoyable. Everyone—or almost everyone—is friendly, and what a difference this makes!

Why does it take a cruise ship to make this happen? What if Democratic and Republican congressmen and senators greeted each other with smiles every day as they passed each other in the halls saying “Good afternoon and have a good day”? What if Palestinians and Israelis did the same, or Sunnis and Shias? Tea Party activists and Progressives? Redskin and Cowboy fans? In fact we had lunch with two couples from Dallas yesterday. No problem.

I do not know how hospitality training enters into it, but we are told that the crew of over 700 people from 38 different countries gets along extremely well in what are very challenging circumstances—getting 12,000 delicious meals served daily. (Yes, that averages six meals a day per person, which proves my earlier observation on nutrition. I got this statistic from the exec chef on my “behind the scenes” tour today, so it is the truth.) Laundering every day over 1,000 sheets, 2,000 towels, washing over 15,000 dishes. In one of the talks, an officer stated that if cruise ship HR policies were used throughout the world, maybe we wouldn’t have as any wars. Could be an overstatement but you get the sense that there is an element of truth in this.

The third marvel has to do with the nautical technology that makes this possible. This ship is relatively small by current cruise ship design standards—just under 1,000 feet long, 150 feet high and 120 feet wide. It cruises at between 15 and 22 knots and at full speed can come to a complete stop in two and a half boat lengths, or about a half a mile. For an older design ship it would take three miles. What makes this possible is the use of huge twin “inboard/outboard” props, which can rotate 360 degrees and require no rudder. The ship can turn on a dime and appears easier to dock than “Second Wind,” our 40 foot sailboat. The new technology when it finds its way into container ship design will pretty much eliminate the tug boat industry.

The bridges on these ships resemble a set out of Star Trek . Paper charts are gone and scores of computer screens monitor every conceivable vital sign as the ship pretty much sails itself. I am sure there is plenty for the small number of bridge officers to do, but during the brief time I was on the bridge during my tour it seemed like they were mainly wandering around checking all the screens.

And everything on the ship is recycled, purified or disposed of in port. Drinking water is made from the sea.

So the bottom line is that Leg 2 has been terrific, far exceeding expectations, which were not all that clear in the first place since we did not know what a repositioning cruise entailed. Would we do it again?  Definitely, though not without a six month advance notice to allow time for fasting and radical weight reduction to allow room for the six meals a day. This leg should go on your bucket list.