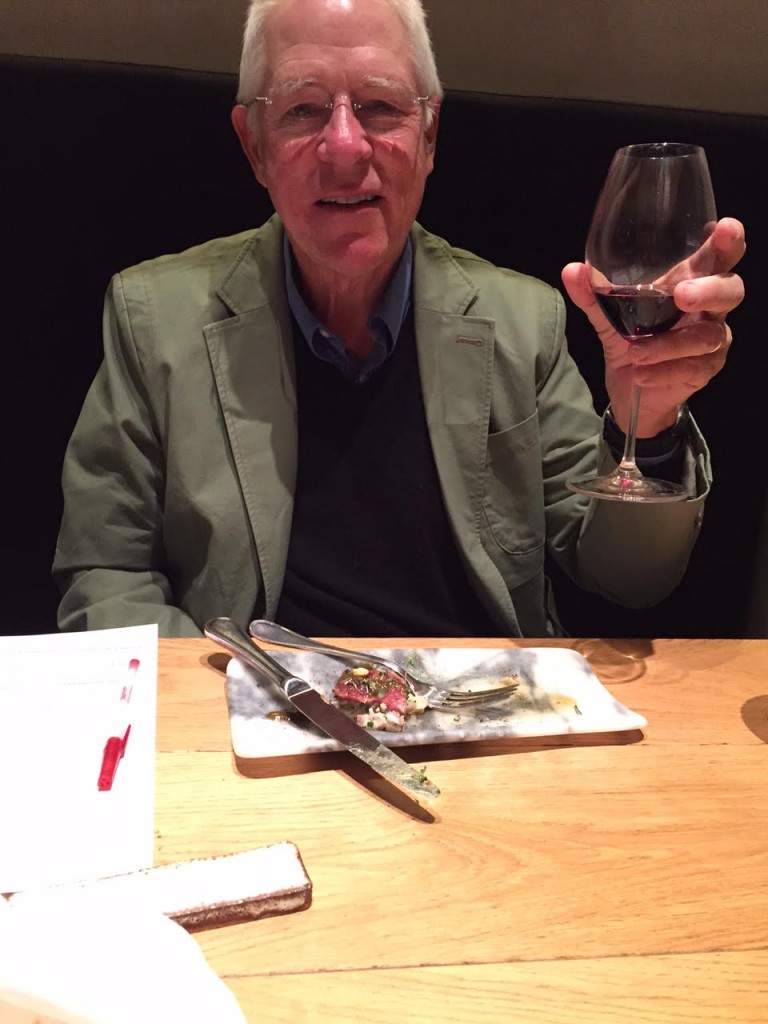 Yesterday was my birthday. To celebrate, Embry found a promising restaurant, called “Richard Camarena” in one of the guide books. We asked Anais to make a reservation and showed up promptly at nine via cab at what we thought was the proper address, hoping that we would not be too early. The cab stopped in front of what was the address, but there was no restaurant or anything else for that matter—only a large, black imposing door. By the time we concluded that we were obviously at the wrong location, the large black door suddenly opened, and a fashionably dressed young couple dashed in, greeted by a guy wearing a tux and no tie. We followed.

We were at the right place after all. We were greeted warmly by another guy in a similar outfit and quickly escorted to one of the dozen or so tables, most of which were surprisingly already occupied (at such an early hour) by what appeared to be a pretty young, hip crowd—mostly in their thirties, guys wearing levis, designer tee shirts and blazers or sport coats, women also in jeans and high heels. The décor was understated and Spartan with concrete floors and simple wood tables with no tablecloths. The dim lighting, however, created a cozy atmosphere; and excellent black and white photographs–mostly of nude women– decorated the walls. The most surprising thing was how few tables there were and how much space there was between them. You could have—and in the US would have—easily doubled the number. At the end of the room was an open kitchen with at least a half dozen guys in chef hats feverishly working away.

Within a couple of minutes, the first of our three waiters came over and greeted us in English. In English! First of all, how could he have known we weren’t Spanish since we are not tourists but are living the Authentic Life of locals? And second, how did he pick up English? In Australia, it turns out, where he spent a year; and his co-waiter, who also spoke good English, spent time in London but was actually Italian.

And so the evening began.

We were provided a simple, one page menu (in English!), which was titled “Our Proposal for Today” and listed 16 dishes, the last three being desserts. We only had to make one decision, however, how many of these dishes to order—six or nine or eleven. Richard, the owner and executive chef, would determine which dishes we got. I decided to go with nine and Embry six. And the prices were not exactly what you would call cheap, especially here in Valencia where we have been eating lunches for two, including beer, for under 12 euros—75 euros for the six dish option and 90 euros for the nine dish option.

It turned out to be a bargain.

There is no way I can do justice to what came next. The waiter first unwrapped a bundle tied with a gold ribbon, which contained the bread. Then the first dish came—and this one was not even on the menu but courtesy of Richard—a “drink” though really more like a soup, which contained wild ranch chicken juice, wine and radishes, followed by a second “gift” from Richard, a dish of spring onions, cream butter and black garlic. The other nine dishes followed. The first was “Courgette peel, steak tartar, fresh strawberries, cottage chease [sic] and capers emulsion,” –and that is just one dish! Then oysters from Valencia, avocado and “horchata” of galanga (no, I do not know what any of this is); and on it went finishing up with two desserts “slightly spicy orange salad and peanuts” and “sweet carrots, yogurt and roasted coconut,” which was one of the best deserts I have ever eaten even though I hate carrots and yogurt and coconuts.

And when Embry mentioned that this was a birthday celebration, another dessert, a small cake with a candle and ice cream, appeared.

And as good as the food was—and I believe I can say it was the most delicious I have ever had—the service and the presentation of the food were even more impressive. We got a change of silverware between each of the 11 dishes and three napkin changes. (Beats me why there were three.) The time between dish changes was usually only a couple of minutes, and all three waiters were friendly and attentive. The third waiter, by the way, was a drop-dead gorgeous blond, also thirty-something. And each dish came in museum quality bowls and pottery of all shapes and sizes. And did I mention the wine? Incomparable.

At 11:30 we had finally finished and were ready to head home. The other tables were still mostly occupied, and no one showed any sign of leaving.

Now I know that by my telling this story you may think that combined with my cruise ship stories I am hopelessly obsessed with food and am a total dissolute, which, of course, would not be far from the truth. In my defense, however, I hasten to point out that the dishes were tasting portions and therefore rather small. So it is not as excessive as you might think. And, of course, to truly understand a country you must taste its food. One way to look at this over-the-top behavior is to think of it as research. Can there be any doubt based on this research where Spain stands?