Leg 2 is now officially over, and we are on terra firma in Spain. Three days ago Leg 3, the House Exchange, began. We will be in Valencia for two weeks.

To be honest I was not sad to leave the cruise ship. Yes, we loved it and would do a crossing again; but the six meals a day, the concerts, lectures, bar scenes, spa routines—it all gets a bit old after awhile.

Now on to the important stuff: We are starting our European land leg with Spain, which by all accounts should be a terrific country. Technically this is not our first time in Spain because we visited the country in the mid 70s, and also the Zuiderdam stopped for two day trips in Spain (along with a stop on the island of Maidera)—one at the port of Malagar, which permitted us to spend a day in Seville, and a second stop in the resort city of Cadiz, where we joined a bus tour to Granada where we saw the Alhambra. Both were terrific, bucket list type of places—extraordinary beauty and a rich history, regrettably not enough time to do them justice in this blog post.

The idea of a house exchange was naturally Embry’s. Hey, anyone can be a tourist. But to truly understand the soul of a country you have got to live there, walk its streets as a common person would, taste food the ordinary person eats, breathe its air, get to know real people —none of the superficial stuff you get as a tourist. So that is where the idea of a house exchange came from—the chance to live the authentic life of a Spaniard. And would anyone doubt that after three days we are true authentic Spaniards? Plus it is free, not an insignificant factor for a Scots-Irish Presbyterian (Embry).

As Embry noted in her blog post earlier today, the Perellos are staying at our house in Washington while we are staying in their small but gracious apartment on the seventh floor of a 20-story high rise, which permits us to see glimpses of the sparkling waters of the Mediterranean about a mile away.

I somehow had the idea that Valencia was a cute- resort-Medieval kind of village, like the ports we visited on the Zuiderdam. Instead it is a dynamic metropolis with almost a million residents with all the hustle and diversity you might expect. There is lots of graffiti (as there seems to be everywhere in Spain), which decorates shuttered store fronts and virtually every inch of alleys behind apartment houses, shops, restaurants, museums, and historic churches. Our neighborhood is about three miles from the old city and could be described as typical middle class. This statement is based on the fact that it is a lot nicer than the neighborhoods between us and the Mediterranean and not as elegant as the neighborhoods in the old city. There are no hotels in the area far as we can tell, and we have heard no one speaking anything besides Spanish. This is definitely not a tourist area, which was the idea, right? And it is quite pleasant and attractive.

There was a bit of a glitch getting here when we realized getting off the train ( a four hour ride from Cardegana, where we disembarked from the Zuiderdam) that we had no way of meeting up with Annais, the Perello’s twenty-something daughter, who was supposed to meet us at the train station. Naturally we had failed to let anyone know exactly when we were arriving at the train station, and the telephone number we had for Annais did not seem to work. But Embry’s guardian angel stepped in; and miraculously Juan Perello answered the phone at our house when we desperately called. Problem solved (He was able to get through to his daughter.) and we took a cab and received a warm welcome from Annais, who is a med student at a local university.

First about the late meals. To truly appreciate the hardship that this has created for two weary American travellers accustomed to the high life you have to remember that our seating at the Zuiderdam was for the early dinner—5:30 pm. In Spain restaurants do not even open until around nine; and if you get there at 9:30, you will be the only customers in the place. At least this has been our experience so far. On board the ship, at this late hour we would have just completed out sixth full meal of the day and ready for bed. This is taking some getting adjusted to, but we are coming along.

And the language. For some unknown and inexplicable reason the Spaniards do not speak English. Yes, a few do– and fortunately Annais is one of them– but very few. Hasn’t anyone told them that English is now the fully authorized language of the Planet Earth? Everybody speaks English, right? They even speak English in South Africa (where we traveled last year) and I am told as far away as Australia and New Zealand. But not here. (Could it be that we Americans—at least some of us–are spoiled and lazy when it comes to learning languages?) Embry keeps reminding me that I took Spanish at Davidson, which I am sad to report is not coming back to me yet. And Embry even listened to a Berlitz Spanish language course while on the cruise though she is no better than I am at the moment. So our first activity the day after we arrived was to buy a good Spanish phrase book, which it turns out does not exist in Valencia. How stupid not to bring one! I am still working on internet options.

A few other first impressions. Security seems to be a major concern here, similar to what it was when we visited South Africa last summer. There are all kind of security locks and keys associated with the apartment and the underground garage and even electronic security devices which need to be turned on and off, even though we are on the seventh floor of an apartment house with a doorman/guard. This could have something to do with the proximity of what would appear to be a very low income neighborhood only a few blocks away. (And what is all this graffiti about anyway? Yeah, we have a problem in the US but nothing like this.)

The city of Valencia is very large and bustling and the old part of the city very quaint and picturesque. We walked from the apartment all the way to the downtown and around the area (over five miles according to my walking app) and were impressed with all the cafes, fancy stores, and the relaxed atmosphere. I understand that post Great Recession Spain has suffered more than most European countries and still has high unemployment, but on a stroll through the downtown you would never know it. Somebody is buying this fancy stuff and eating the delicious food. The recession is probably felt more in neighborhoods like ours.

(And given the strength of the dollar, prices of just about everything seem like a bargain to us.) 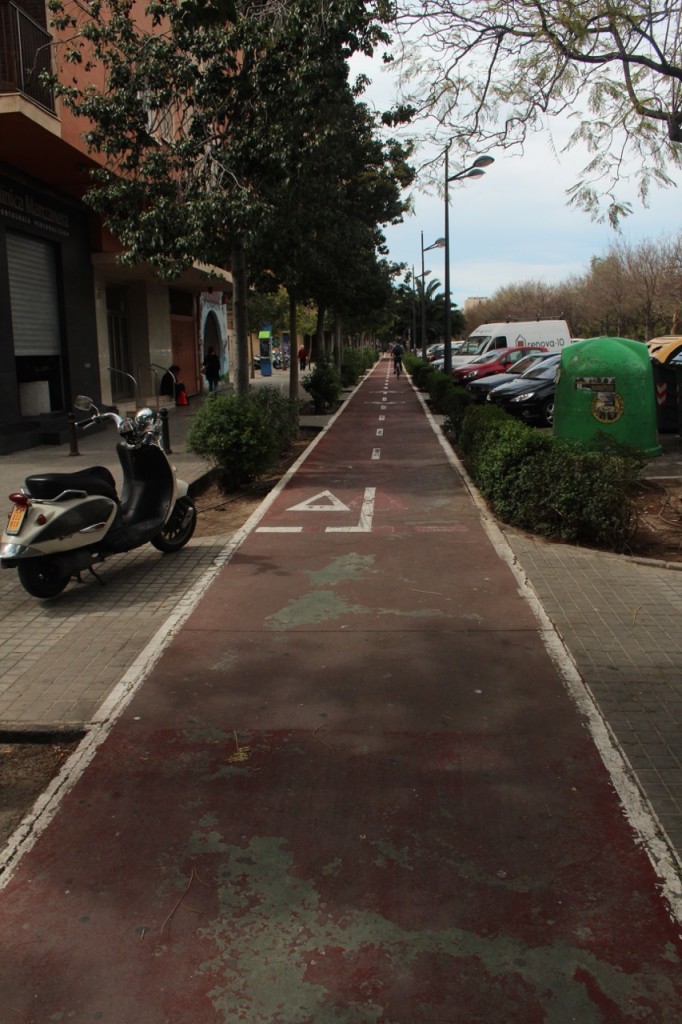 Finally, let’s hear it for city planning. There are more dedicated bike lanes here than I have seen anywhere, even in Denmark; and they are heavily used. And bike-share racks are everywhere. There is also a linear park that used to be a river that was created in the 1950s when the river was diverted following a major flood. If you live anywhere near the downtown you are only a few minutes walk from this delightful and diverse park, which is also heavily used.

And, oh yes, the Spanish people. They aren’t fat like so many of us Americans– at least not anywhere near as many. Maybe it is because they ride bikes. And don’t go on cruises.