As the bullet train flies out of Paris at 180 mph and I am situated in a cabin with a bearded man, probably around 30 and two small kids (one, a toddler, screaming bloody murder), I will summarize what we actually did in Paris for the four days we were there. (Embry is in another cabin on this car, also with a family, where hopefully she is having better luck than I am.)

And what is a better way to see this extraordinary city than walking along its narrow streets, its grand avenues, its parks and plazas, and, highest on the list, along the cay beside the river Seine? The first day we started off around nine in the morning, about the same time as the French Marathon was getting underway and turned right just over the bridge as the runners—and there were many thousands as you can imagine– were turning left. We walked a couple of miles along the quai watching all the tourist boats and barges motor by and all the families spreading out picnics on this drop-dead-gorgeous day. It was Sunday, and the entire city seemed to be empting out of apartment buildings into the parks and along the river. We eventually crossed back over to the Left Bank where we strolled through the Jardin de Plantes (botanical gardens), stopping for a salad and a sandwich and then made our way along the narrow streets of the Left Bank, pausing at small parks every now and then to watch kids playing and adults watching kids and, of course, a stop for an afternoon coffee at a sidewalk café. (For some unknown reason coffee here does not seem to bother me where in the US I levitate with one cup of real coffee.) 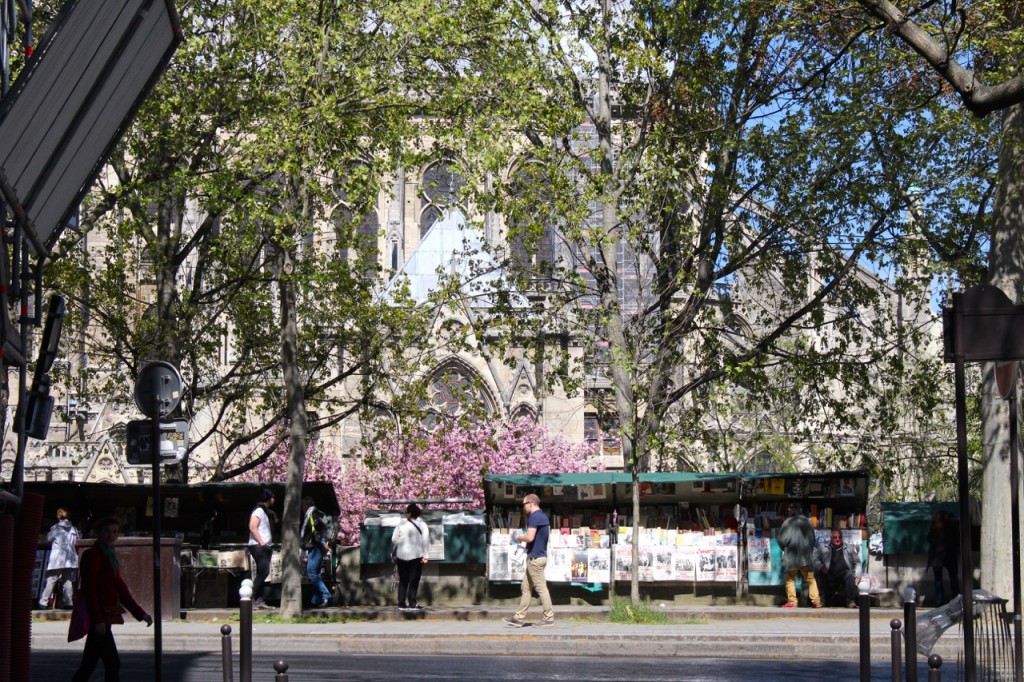 We arrived back at the flat around five and at seven strolled with Mireille a mile or so to one of the best French bistros in Paris, which it turned out was actually a Mexican Restaurant, which seemed a bit unusual at first until I realized that in the US we would never take a guest to an American restaurant in our neighborhood but rather to one of our favorite ethnic restaurants, which could well be Mexican. Or French! In any event, we had a great time and returned home around nine, exhausted after walking about seven miles (how did I ever manage without an iPhone walking app?) and seeing a lot of Paris. It was a terrific day!

I have gone into to some detail about day one in Paris because this is pretty much what we did every day. The key variables were when to start, whether to go east or west along the Seine and whether to explore the Right Bank or the Left Bank. One day we walked to the Eiffel Tower (and, yes, went to the top despite the long lines and waiting, probably not worth it), and another to the Champs Elysees. We spent the four days outside in this perfect weather, saving the museums for when we return. 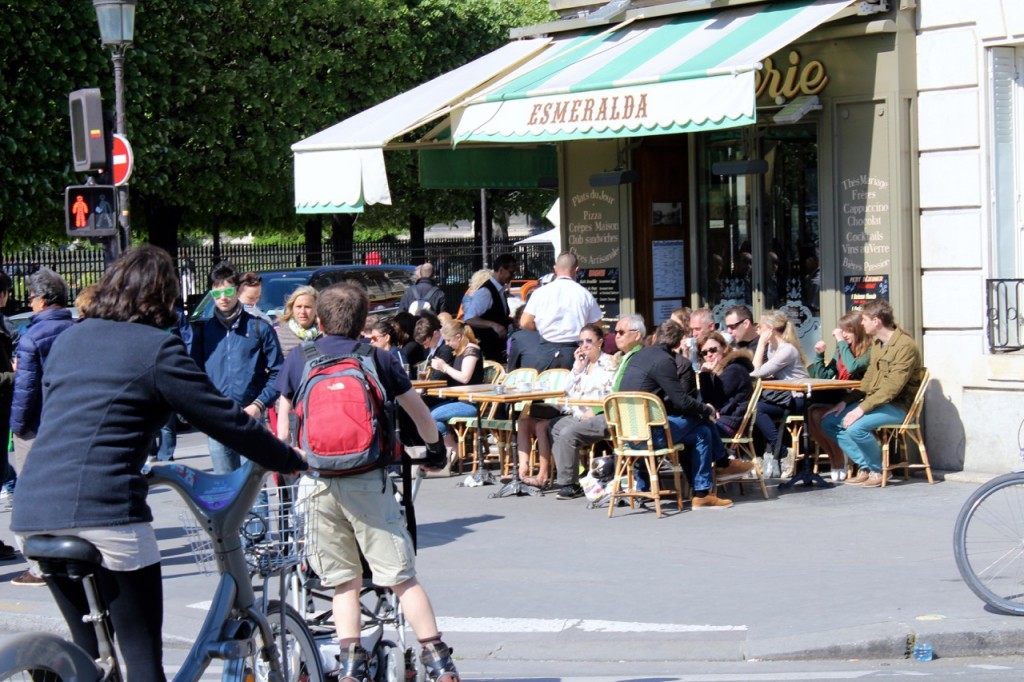 There were three highlights. The first was spending time with Mireille, who has to be one of the world’s most remarkable women, who at age 80 looks like a fifty-year old, powerwalks like a forty-year old and has a zest for living and a sense of humor unmatched at any age. The second was the evening we spent reuniting with Beatrice, one of Embry’s French colleagues in the health research and policy field. Well known in international health care research circles, Beatrice mentored Embry when Embry spent six weeks in France in the 1980s working on her dissertation, comparing the US and French health care systems focusing on maternity and child health. (Frankly, I was convinced from the outset that the topic was chosen as a way to legitimize another long stay in France; and it worked, resulting in a PhD and a long term friendship with Beatrice, among other things.) Beatrice proudly showed Embry, Mireille and me around the hospital where she works and her office along with the historic buildings associated with it (Port Royal and its cloister, along with the historic Observatoire).   Afterwards we went out for drinks at a very upscale neighborhood restaurant followed by a delightful dinner at an intimate, quiet café.

The third highlight was running into Josie and Melissa, dear friends from All Souls Church (and also from sailing since Melissa has been a lynchpin on the “Carolina Blue” racing team for years). We had no idea they were in Paris but learned yesterday via Facebook (which we finally got access to when we discovered there was free WiFi available in the park behind Notre Dame) that not only had they just arrived the day before, they were staying in a hotel only a few blocks from Mireille’s flat. After some effort we finally connected and met them for a glass of rose, good conversation, and catching up at a café behind the cathedral before they rushed off for a dinner reservation, and we headed off to the Notre Dame Cathedral for an amazing concert of renaissance and Baroque music just at sunset when the windows are at their most beautiful.

Now we are on the way to Quimper on the Atlantic Coast to visit our sister-in-law, Martine and her partner, Bernard, where we will be for the next three days.

And, oh yes, the infant for the moment has stopped screaming. But the older one, a girl, is throwing up.

And, by the way, I lost my cell phone on the train, Incident Number 4!

(The two-year-old stole it, I am sure. When his sister was throwing up, he was under the table carefully removing the cell phone from my pocket with his tiny, trained hands as instructed by his dad, the guy with the beard and, I now remember, beady eyes.) Martine’s only comment was, “Joe, if these things keep happening to you, by the time you are ready to board the container ship in Shanghai, you won’t even have your clothes left.”