So what is wrong with this picture? You return from a visit to the dentist. You get back to your hotel and order two cups of coffee and one cup of tea for yourself and three others in the café lobby. The cost for the dentist is $30 US, the four drinks, $36.

Welcome to Russia! We are in Moscow.

We arrived here on Wednesday. Today is Friday. So we have only been here three days. I have totally lost track. It seems like months.

We were met at the train (which miraculously arrived exactly on time despite a three hour delay in Brest, which I now gather was just part of the program) by Masha, a Russian friend of Andrew’s, whom he met at INSEAD, the international business school he attended near Paris. Masha was an executive at Moscow Coca Cola for quite a while and now has her own consulting practice in strategic marketing. She was our handler for the day. She is a complete delight—sharp, intelligent, lots of energy, articulate and a fresh perspective on what is happening in this wild and strange country. We talked over coffee (yes, about a $50 tab when you throw in a croissant or two); and in the afternoon she gave Embry a tour of the neighborhood and an introduction to the Metro system (while I took a nap). 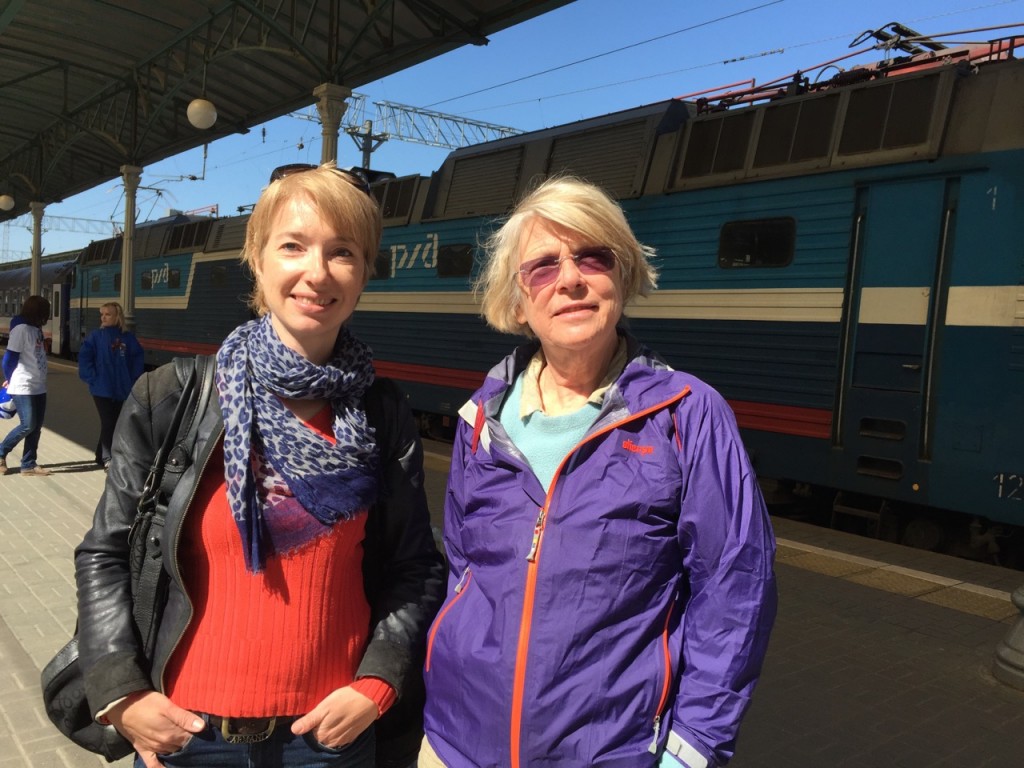 The hotel (International Moscow Tverskaya) is the fanciest we have stayed in yet and a huge step up from the rather modest hotel in Warsaw. Yet despite the outrageous cost for coffee, the cost is reasonable–about $175 a night, around what you would expect to pay in the US this for a hotel this nice , maybe less. Rooms are large, lobby elegant, free mini bar, first class fitness center and spa—the whole works. Men wearing dark suits, white dress shirts with no tie, and sparkling black shoes come in and out of the lobby, smoke cigarettes outside the main entrance and gather in groups looking serious and speaking what sounds like Russian. I envision some business deal in the works or does it have something to do with the big Word War Il victory celebrations this weekend?

We were so tired after the all-nighter from Warsaw that we grabbed a light dinner at a modest café around the corner and turned in early. Food was delicious and reasonable, about the same amount that we spent on the coffee a few hours earlier and in line with US and Western Europe prices. We needed to rest up. Tomorrow would be Sasha day. 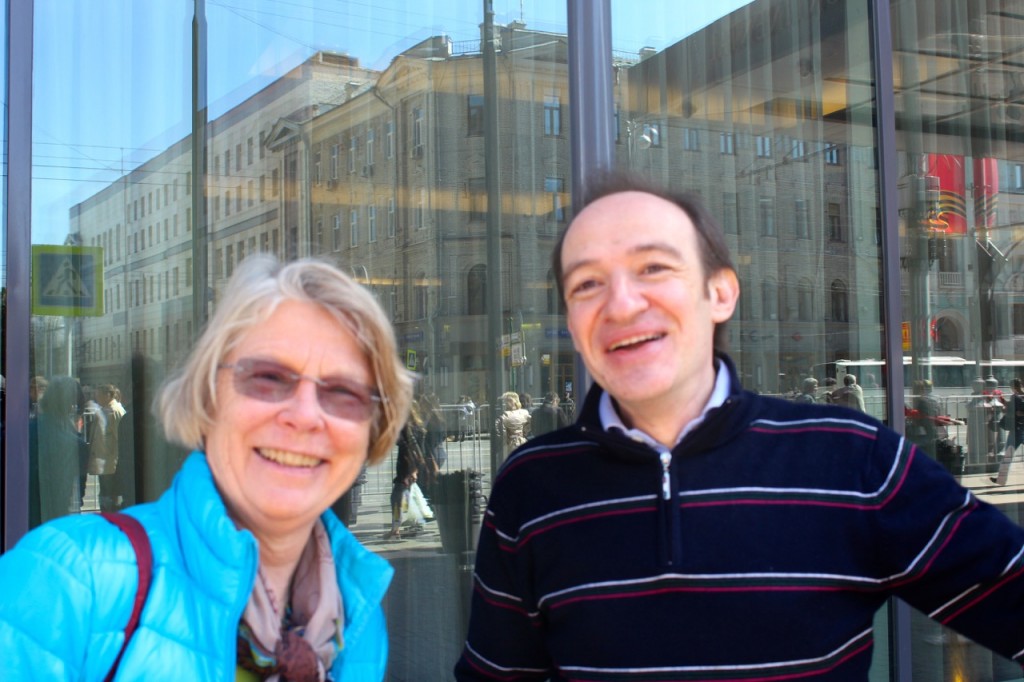 Sasha was Andrew’s best friend in the 1980s when he took his junior year abroad, and they have remained friends ever since. Both were interested in music, which Sasha has pursued as a career and is now recognized internationally as one of the best choral arts directors in Russia and probably the world. He directs a renown, all male, Jewish chorus, which has sung in the US and most European countries many times.

Sasha met us in the hotel lobby at ten in the morning, complaining passionatley about the main avenue (Tverskaya) being shut off for a dress rehearsal of the big parade on Saturday, forcing him to have to park several blocks away. Sasha is one of those larger-than-life people with unstoppable energy , an opinion on everything, and a charisma that makes you want to buy whatever he is selling. Getting to know him was in itself worth the trip to Moscow. He took us to various off-the-beaten-path neighborhoods, to one of the most beautiful Metro stations (most have murals, many worthy of art museums), the old Russian Orthodox Cathedral, and the synagogue where his grandfather was a pillar of the congregation. We didn’t get his whole life story, but we got a lot of it—how one grandfather was murdered by the Nazis when he was captured after his plane went down and they forced him to drop his pants, exposing his circumcision. The other grandfather was imprisoned under Stalin and was scheduled to be executed, saved only by Stalin’s death. He ended up living until he was almost 95, and Andrew knew him. It was not—and is not—easy being Jewish in Russia. Sasha is married and has one five-year-old daughter, the same age as Andrew’s kids (now five and six).

After a delightful lunch in a very nice, non tourist café (cafeteria style, total cost for three people about the same as the coffee), we drove some more, heard more stories and were deposited back at our hotel around three, totally exhausted. Sasha presented us with free tickets for a concert that evening at the Moscow Conservatory, which turned out to the best seats in the house for a fabulous concert featuring arias from famous Russian operas, though without a program in English we were clueless as to which ones.

This morning Andrew’s housekeeper when he lived in Moscow, Galina, now 85, came to visit us in the hotel along with her daughter (our age), who speaks a little English. After coffee at the hotel they took Embry for a tour of the side streets in our neighborhood. The tour was quite interesting, and Galina hardly slowed down during the hour or so they strolled along cobble stone streets and back alleys. 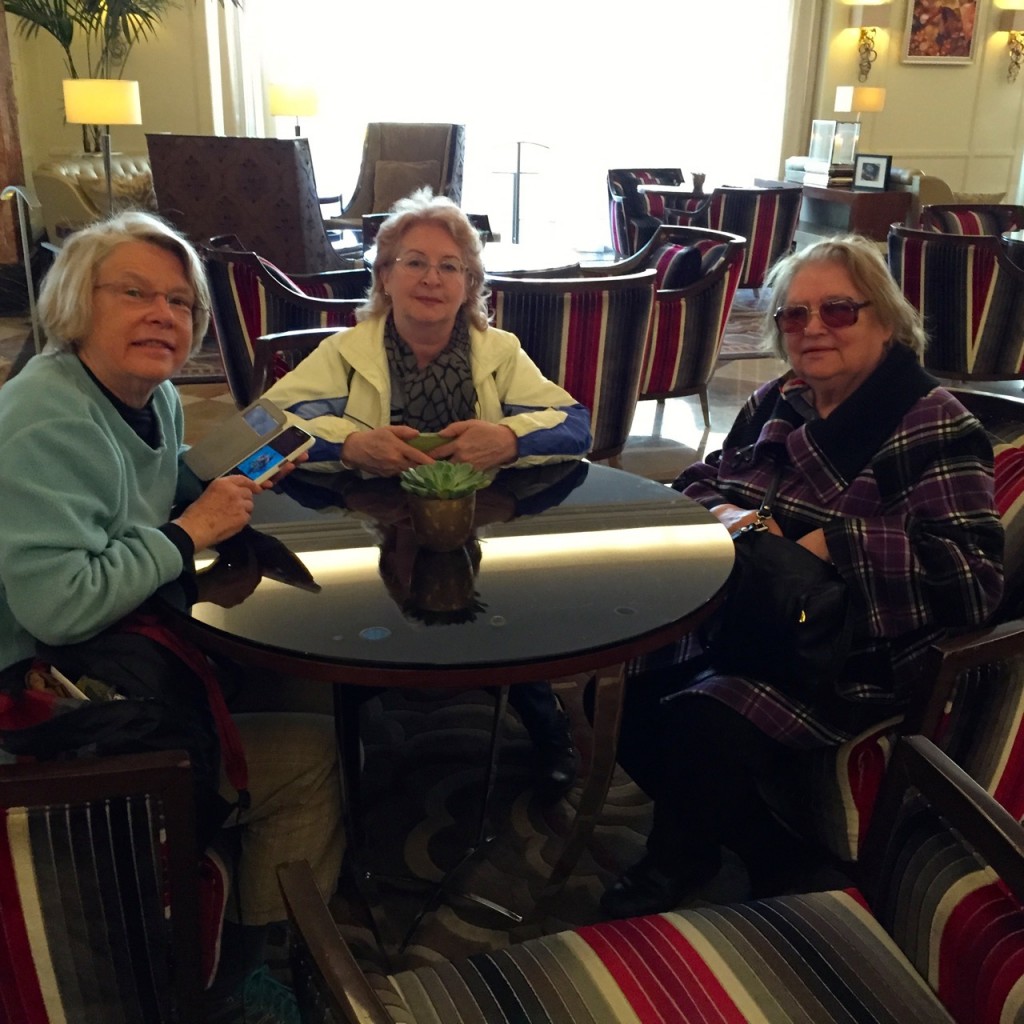 I was not able to join them because today was “errand day” for me—finally tracking down a dentist to take a look at my teeth (suspected lost filling) and also trying to find an Apple Store to help me get my apps running (no luck). After the walk with Galina and her daughter Embry visited an art museum (Tretyakov) specializing in Russian impressionist and icon art. The Bolshoi is tonight. Busy day.

Three observations: the first about Moscow in general, the second about Russian health care and the third about economic imbalances.

How Russia Has Changed. We visited Russia in 1993 when Andrew was doing “privatization” consulting for Deloitte and Touche. Moscow now is a completely different city. Then it was drab and grey with few stores of any type and no outside investment from multinational companies. Today every super luxury retail chain is present, selling stuff at prices that are roughly twice what they would be in the US or Western Europe. All the big luxury hotel chains are here. Huge skyscrapers have popped up in new financial districts. There are luxury condo high rises. Cafés and ultra high end restaurants are abundant and often full. The city has the energy and the edginess of New York. Fancy Mercedes, BMWs, and even Rolls-Royces are everywhere. That a city can change so much in only 25 years is remarkable.

Russian Health Care. The dental issue is that I suspect that I lost a filling while in Brittany. Thanks to Mireille, I was able to see a dentist in Paris, who said my teeth were fine; but I wanted a second opinion before setting off to Siberia. Andrew got one of his Russian friends to recommend a dental office, and I looked them up on the internet and sent them an email. In less than a half hour I got an appointment for the next day complete with directions, a photo of the building and a Google map. It was a bit of a challenge getting there (maps use the English script but the actual street names are in Russian script, no similarity); but when I did finally find the place, I was met by an English speaking “handler” who got me registered and into a dental chair without having to wait. The dental practice of this large health practice (Medsi) took up an entire floor of an eleven story building occupied entirely by this health provider. There were doctors and nurses everywhere, and everything was clean and sparkling, a far cry from what John and I experienced in Berlin. The doctor spoke little English but was polite, professional and seemed to know his stuff. He too said “no problem” and even brought in a colleague for a another opinion. In explaining his diagnosis he typed on his computer in Russian while in the second column on the screen the English translation appeared. He asked in broken English what I did for a living, if I had children or grandchildren and how I liked Russia. He smiled and wished me well as I departed, saying either “Obama ok and Putin crazy” or vice versa, I was not sure which, but like to think it was the former. Total cost: $30. The entire experience was very similar to what we would get at Kaiser, the large HMO we belong to in Washington.

Imbalances. I will address this issue further in a subsequent blog. The bottom line: in terms of the economy, what seems to be happening right now in Moscow just does not make any sense. Prices are all over the map but generally way out of line with US and Western Europe at a time when sanctions and low oil prices are hurting ordinary Russian people. We are told average salaries are around half what they are in the US, and much of their safety net has been dismantled. Yes, there are oligarchs and some people who make lots of money, but they have to be a small minority. There is no way that the ordinary Russian can afford most of what is in the stores—shoes in average shops with prices of $250-$500, clothes about the same. Who is buying this stuff? Where is the money coming from? And in the midst of all this, there are lots of weathered, old women (babushkas) standing on street corners with empty cuts asking for money. Something is out of whack. 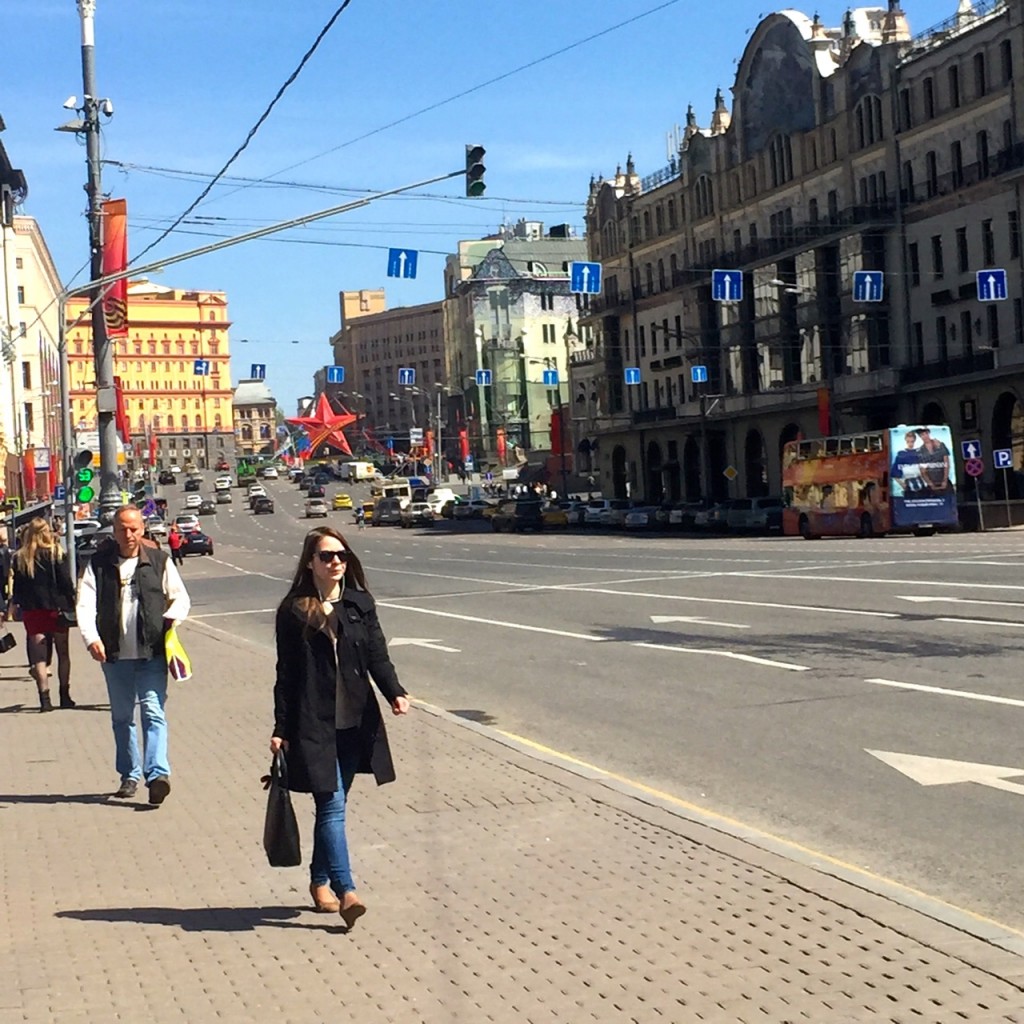 There are also signs of trouble. Stay tuned for the next post.