Mongolia. The end of the earth. At least that is what it feels like on the high plateau as we wake up to pink skies as our train rolls along through vast, open plains surrounded by jagged mountains. Unlike Russia, where you rarely see a farm animal, herds of animals are grazing—cows, goats, sheep and even an occasional camel. As the morning progresses we see shepherds and herdsmen on horseback with sheep dogs following close behind. Yurts—called “gers” in Mongolia, the large round tents used by nomads, dot the landscape. 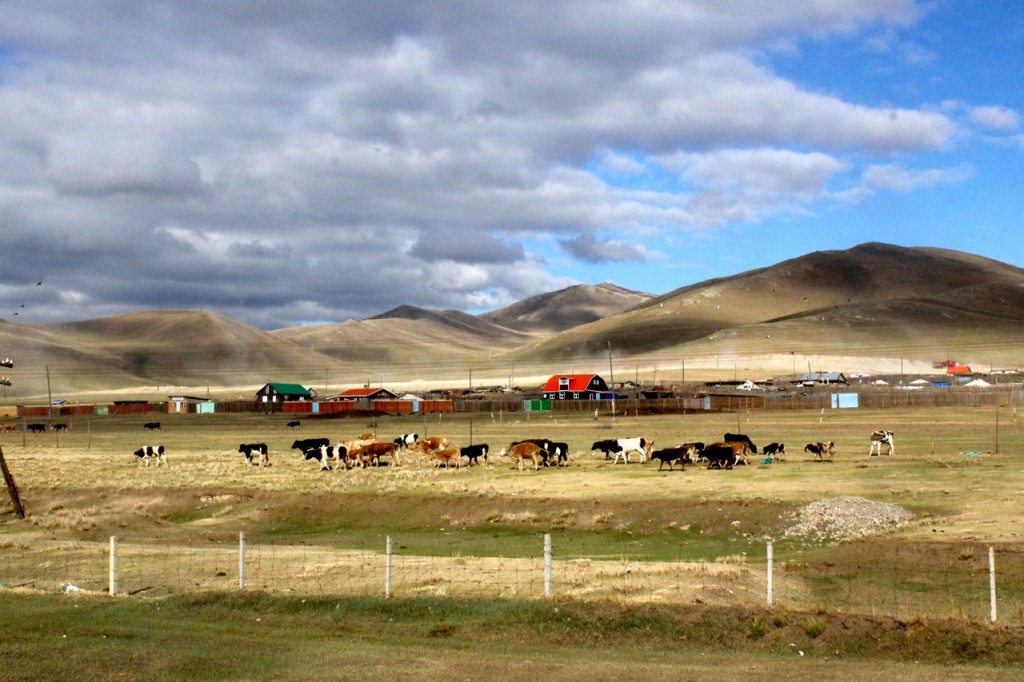 Crossing the border occurred between 11:00 pm and 2:00 am requiring three interruptions of sleep as first the Russian officials knocked on our door and examined the passports, shining flashlights in our eyes to verify our identity. After that action was completed and we dozed off, the same process was repeated by the Mongolian officials who took the passports and about an hour later again knocked loudly on our door to return them. So much for sleep that night. But everyone on the train cleared passport control, and we were in Mongolia.

Not that anyone can truly understand Mongolia, but if you know a few facts, it will help. First this is a vast and mostly vacant country—four times the size of Germany and only three million people, two-thirds of whom live in and around the capital, Ulan Bator. At an altitude about a mile above sea level, the climate is cold in the winter, hot in the summer and unforgiving. The only trees are along rivers or near the tops of mountains. Second, from the beginning of time this was a land of nomadic herdsmen. According to our guides the concept of land ownership remains fuzzy and vague even today, and the nomadic identity is part of their heritage and their soul. These nomads ruled the world under Genghis Kahn and his children and grandchildren in early thirteenth century. Genghis Kahn is revered today as the Mongolian’s greatest leader as evidenced by the many statues of him and the Genghis Kahn name on all types of establishments—bars, restaurants, hotels and businesses. Third, this country was hard core Communist beginning in the early 1920s when they were closely allied with Russia and a de facto Stalin puppet. Since the break up of the Soviet Union in the early 1990s, they have had a two party Democratic Republic, and from all we can tell despise Russia, which came close to destroying the country. 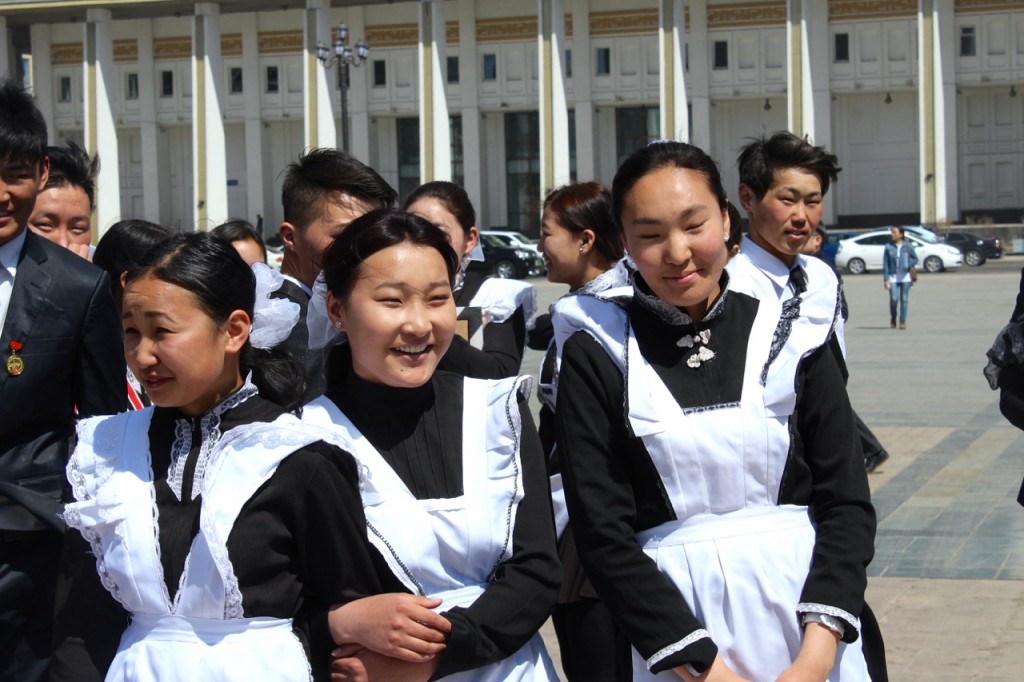 Nowhere is the malice by the Soviet Union more evident than in religion. I knew the Soviet Communists believed religion was “the opiate of the masses,” but had no idea they outlawed all and every type of religion in all the areas they controlled. This did not mean simply that church doors were locked. It meant murdering or exiling the clergy and destroying most religious buildings. In Mongolia it meant destroying scores of Buddhist temples and religious buildings, leaving only two that survived (which were used as stables during Soviet control). We visited both. One, called the Winter Palace because it was the residence of the last of the reigning Kahns, is now a museum. Though it has not been maintained well, it gives you an idea of what life was like for the elite before the Communists took over. The second is now a functioning temple with the world’s tallest standing Buddha, a gold painted statue about a hundred feet high. A dozen Buddhist monks in red robes were chanting as worshippers came and went, placing their hands so they could feel the smoke from incense burning in the erne. The monks are Tibetan Buddhists and belong the branch called “Yellow Buddhism,” and their worship service to my eyes had a strong dose of mysticism. Lots of gold everywhere, incense, candles, chanting, gold statuettes of deities—in some ways mysteriously close to the Russian Orthodox and Catholic services we have witnessed.

The other things we did were to take a bus tour of the city, visit the large central square with statues of Genghis Kahn and Mongolian warriors on horseback, watch a Mongolian folk music show, have lunch at a Mongolian barbecue grill (very good) and dinner (not so good) in a local restaurant located in a downtown theme park. By six we were on our bus headed to the Kempenski Hotel for our second “train break.” Embry chose to stay in a ger located in a national park about 30 miles from the city. (More on that in the next blog post.) 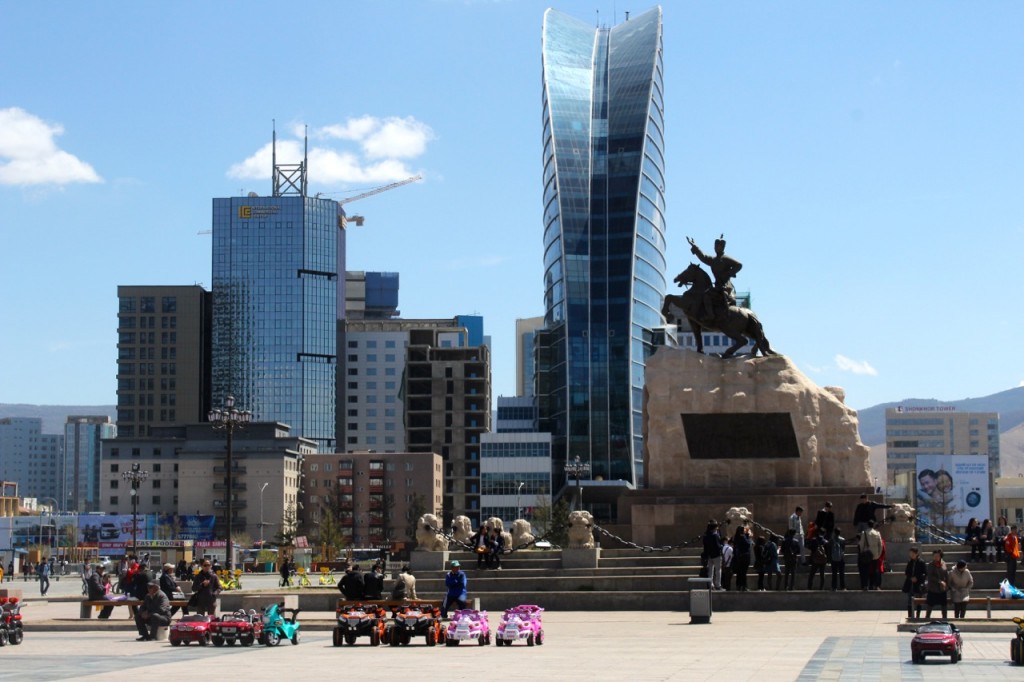 A word about Ulan Bator: the capital with almost two million residents and the only real city in the country, Ulan Bator, is a mixed bag. Traffic is horrendous with not enough traffic lights and way too many cars for the streets. Air quality is a problem, especially in the winter. It was not that good today. The buildings are a mix of old, Soviet style structures like you see in Siberia, many in disrepair, and an assortment of new apartments and office buildings, some quite stunning and others awful. Lots of construction is underway. There is more English language on signs and advertisements than we have seen in all the cities we have visited so far combined. It seems like every block has at least one karaoke café/bar and some signs are in Korean. Some older neighborhoods have dirt streets with homes that look a lot like the Siberian shantytowns except here the roofs are painted bright colors—red, blue, and green—so the city seems much brighter than Siberian cities. The sprawling suburbs seem to go on forever with a mixture of modest houses, many in poor shape, gers, and a few, brand new, larger houses, usually in gated communities (one named “Happy Valley”). If there were any city planners involved in any of this, it is for sure they are not graduates of the UNC School of City and Regional Planning.

Most sprawling neighborhoods, not just the gated ones, are surrounded by walls, which look a bit like corrals. All this gives the impression of a dynamic and somewhat out-of-control frontier city that is way too big for its own good. 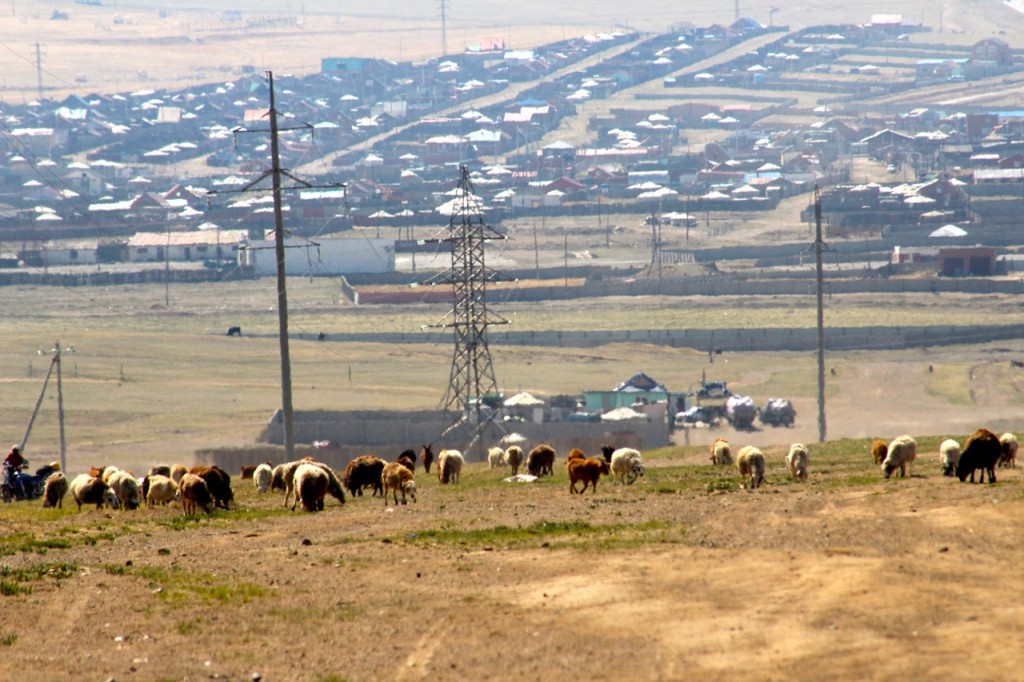 So Mongolia is a nation of extremes: extraordinary natural beauty and wide open spaces with nomadic life styles that go back more than a thousand years and a huge, bustling metropolis with helter-skelter development and insufficient infrastructure to handle the volume. Lots of people are very poor, but there are also of signs of energy and renewal. There is no way to know in a two-day visit what the future holds.