When we were in Mongolia, we had the option to stay overnight in a “ger” (which is the Mongolian word for the more-commonly used term “yurt.”) Apparently in past years this early part of the season (the snow has only recently melted) has been “iffy” for ger-sleeping, due to extremely cold weather, so we were not encouraged to do this (in fact we were discouraged). However, when I read about this option long ago when we signed up for the trip, I knew immediately that it was something I wanted to do, since I love sleeping out in the wilderness, and being in the Mongolian wilderness sounded amazing. I was the only one of our group of 18 who chose to do it! 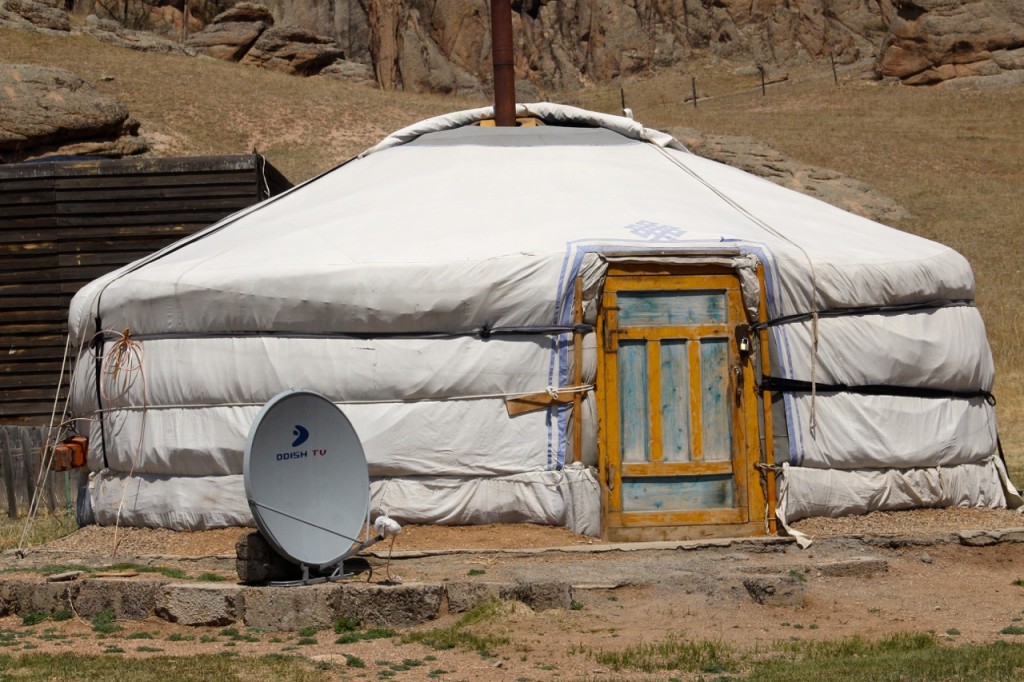 The following is the excerpt from my diary describing my overnight ger stay, which I took with my own personal English-speaking Mongolian guide, Baggi:

We made our way with a driver through the awful traffic of Ulan Bator out of town and through the beautiful countryside of Mongolia. It is extremely arid, all brown now, with some green grass peeping through and some wildflowers.

All sorts of animals graze in flocks with shepherds, usually on horses. (In the course of the trip we have seen horses, cows, sheep, goats, yaks, and camels.) Regardless of the species, all the animals are short, stocky, and with plenty of shaggy hair. This allows them to survive the harsh Mongolian winters by grazing in the snow. For the winter they are often on their own, especially the cows and yaks, who seem to know how to wander for food and get back home. Now is the time of calving and foaling, and there are lots of newborns in the herds. All of these animals are milked, and there are a variety of specialized milk products from each type. For example, horse milk is fermented overnight and drunk the next day (and not made into cheese). Cow and goat milk is made into cheese, etc. 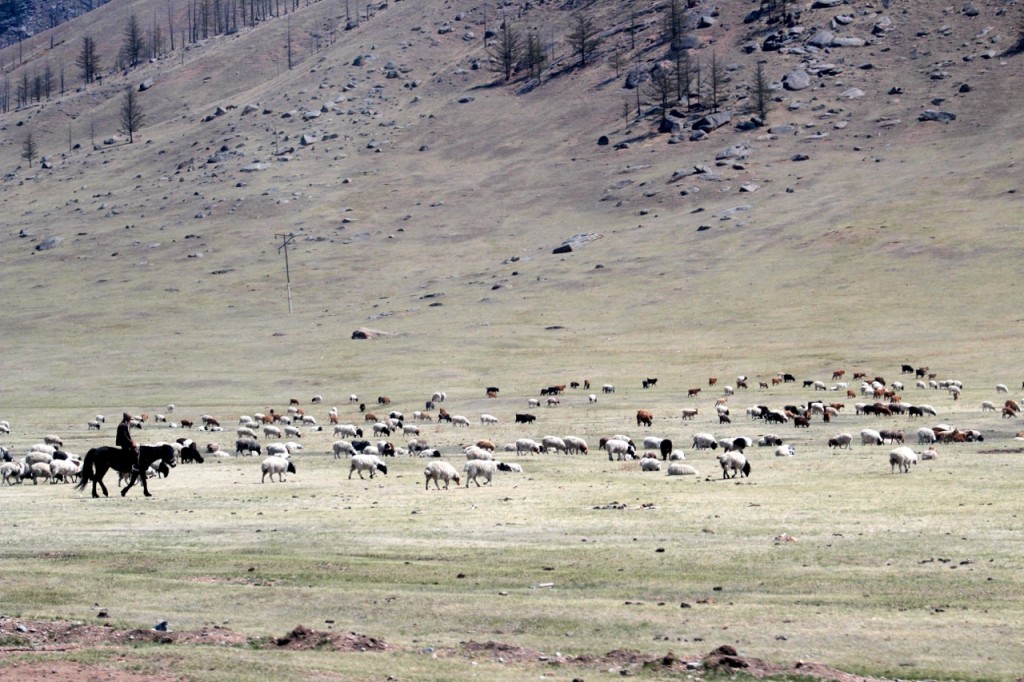 When we reached the “ger camp,” we were in a beautiful, remote place which has been somewhat spoiled (but not much) by several of these camps, which have been developed for tourists (including Mongolians themselves from the city who like getting back to nature). Each camp has about 30 gers, as well a central facility with toilets and an eating hall. Ours was very nice. There were numerous staff, about 25, but It was confusing to me what their jobs were. Some were in the kitchen, some maintained the facilities, some stoked the fires in the gers, and some apparently are just sitting around waiting for more tourists to show up since it is very early in the season. The night I stayed only three gers were occupied, one for me, one for my guide, and one for an adventurous Swedish couple who are taking the “regular” Trans-Siberian to Beijing and just got off and Ulan Bator for a ger stay.

A ger is a round Mongolian house made of fabric (canvas, I think) that is a rather standard size, regardless of family size. These are used by many Mongolian families, no matter how large, and you see them in towns or in the countryside. They are completely round with a peaked roof, out of which goes the stove pipe. Some light comes in at the top, but there are no other windows. The style or color outside (off-white) does not seem to vary very much from place to place. While the outside is plain, the inside is quite colorful with painted wooden spokes that hold up the ger fabric and colorful painted furniture.

That night we had dinner in the central facility, and they stoked up my fire. The wood stove is necessary because it gets very cold at night. When the fire is going, it is very warm in the ger, and when it is not going, it gets very cold after sunset. Luckily, I had packed my “cat burgler suit” (so named by my friend, Sue Dodds, because it is tight fitting and solid black). Purchased it some time ago at REI for a sailing trip in the Puget Sound, this hooded fleece garment always warms me up, and luckily I had packed it for this very occasion. I put it on after supper and was never really cold afterwards.

When it got dark at 10:30 my guide took me stargazing up the hill. It was amazing to see the stars and Milky Way slowly appear in the vast Mongolian sky. Afterwards, with my warm clothes and four blankets, I stoked up the fire and slept like a baby.

After a great breakfast with Baggi and the Swedish couple, we set off walking across the nearby hills. We stopped at the home of a nomadic family (prearranged, I’m sure) for another breakfast with traditional food, including Mogolian tea (which is drunk with salt and not sugar) and dried goat cheese (which has a very savory—almost bitter—taste). Their ger was similar to the one I slept in but houses a family of five, with beautifully painted furniture inside. It also had the father’s medals from horse riding contests hung around on display.

We took a fairly strenuous walk up into the hills, where we saw a tree with prayer flags. Apparently this is a place where shamans come to offer prayers. Baggi is concerned about environmental issues, including one that is uniquely Mongolian. They used to have prayer flags made of silk which typically lasted only a couple of years. Now the prayer flags are made of plastic, and they never go away, a situation which apparently kills the trees.

Baggi is interested in birds, and we saw some on the walk, which he identified for me. It was interesting to see the magpies in their large nests.

After this we hiked down to the paved road where we were picked up by the bus with the rest of the group, who had driven out from town for the afternoon. I was able to tell them (trying not to gloat) what an amazing experience they missed!

In the afternoon we had a “typical” outdoor Mongolian barbecue, and then saw a nice show including two amazing musicians singing and playing on traditional Mongolian stringed instruments. One of the men sang in the traditional style called throat siging, which is difficult to describe. It is wordless for the most part. He sings both extremely low (sounding like a bass fiddle) and extremely high, sounding like a bird or a flute.

Then we saw some traditional Mongolian wrestling, archery, and horse racing. Mongolian racing resembles sumo Japanese wrestling; all ages and weights wrestle against each other, and there are almost no rules. The archers are both male and female. The horseback riders are old and young. These are the three big Mongolian sports, and there is a huge national competition in each sport every July. 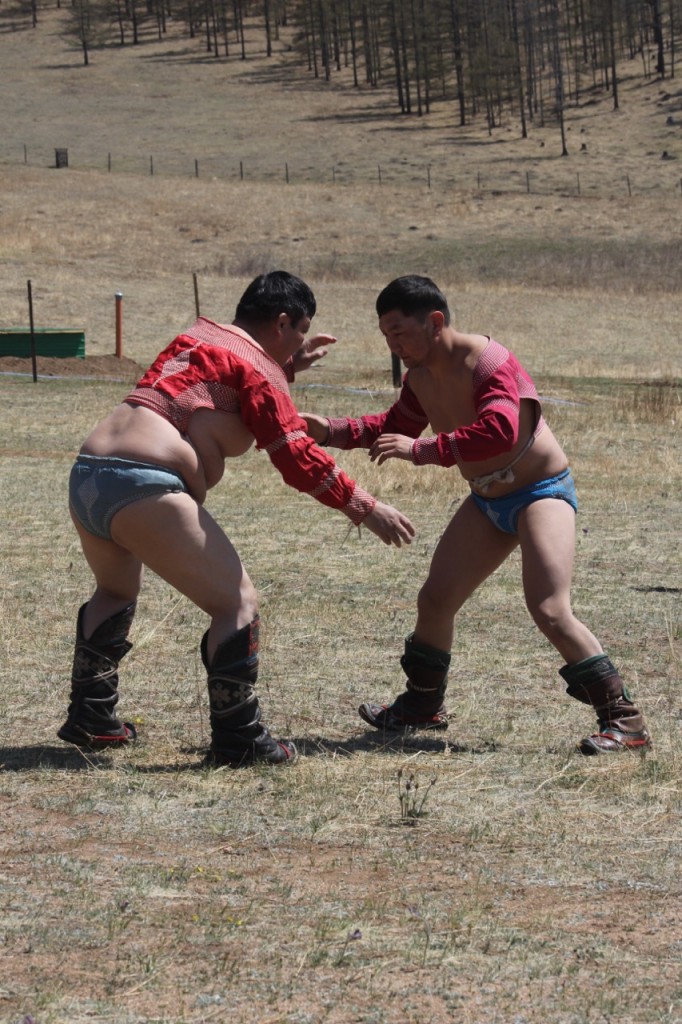 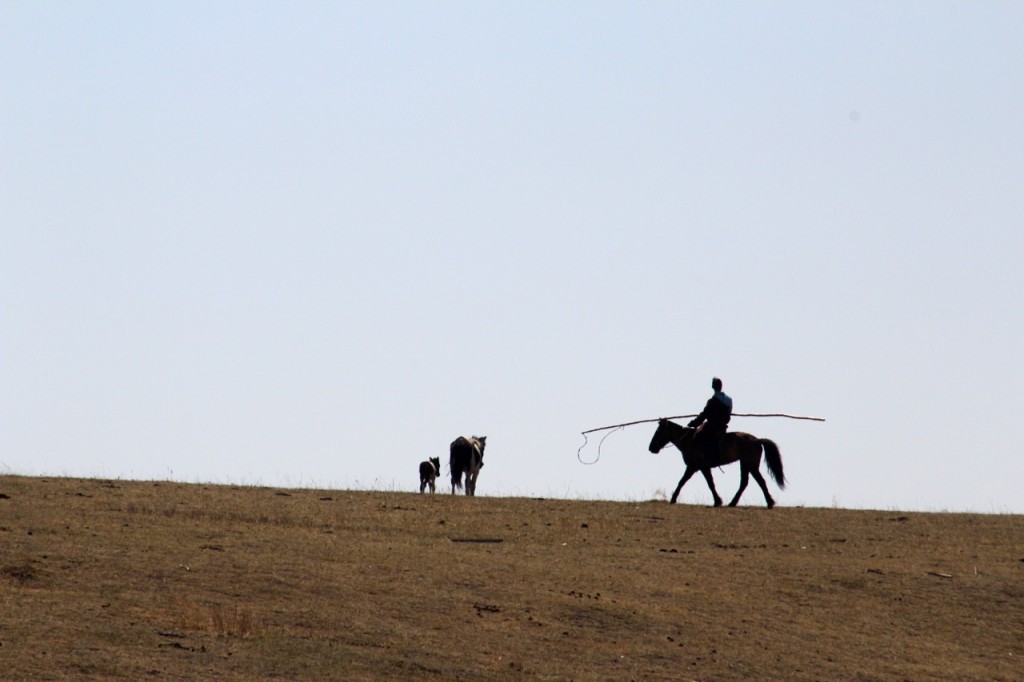 We went back to town and again boarded the train headed for the border, sleeping on our Russian train one last time. Early the next morning we awoke in the Gobi Desert. It is a vast expanse of brown/beige sand, with some minimal foliage, somewhat like parts of Arizona. Astonished, I looked out the window and saw what I thought was a herd of horses, which turned out to be a herd of camels running very fast, herded by a rider on horseback. Then the train stopped and the camels and rider came up near to the train. Hans (our tour leader, the “big boss,” a very nice and out-going German, who speaks multiple languages fluently, including Chinese) had apparently arranged for this touristic “photo-op” stop. So most of us got off and put our feet down in the gobi Desert, which was actually pretty fun, if a bit surreal, even more so when the Mongolian musicians who had entertained us the night before hopped off the train and began playing and singing in the Gobi Desert surrounded by camels. 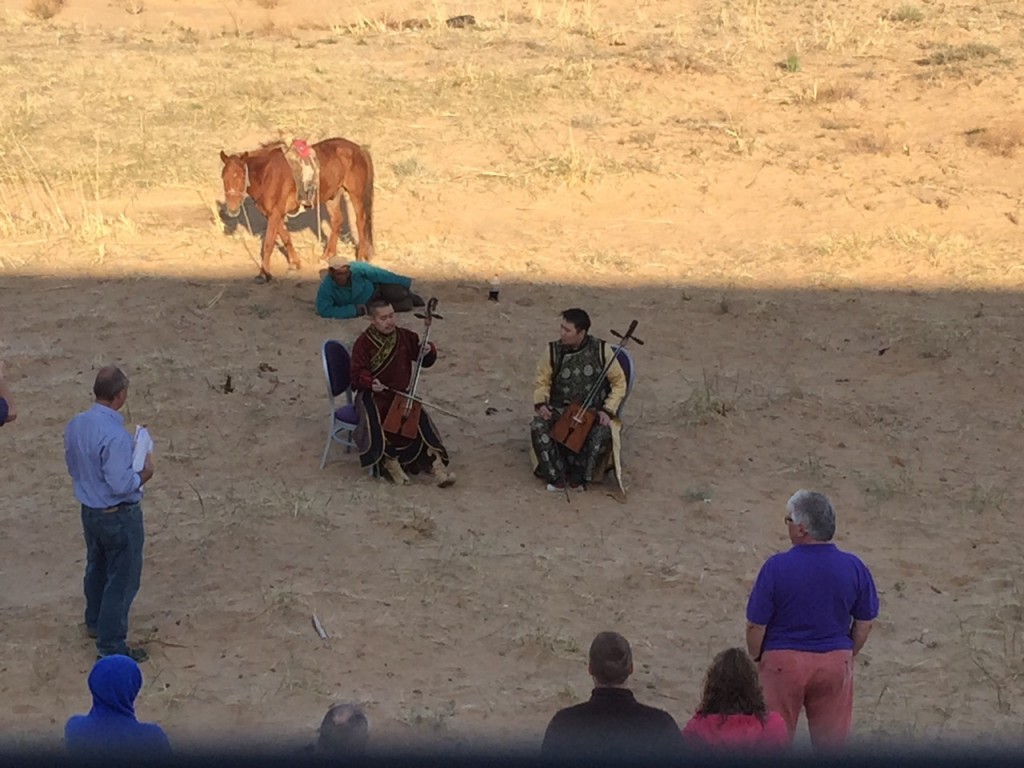 You wondered what those camels and their herder thought of these strange Europeans and Americans and all of their elaborate cameras. From the look of the camels, who were milling around and munching the occasional bit of desert grass, it looked like they felt it was all in a day’s work. The herder himself seemed rather amused (especially since he was going to be paid an unknown sum). He came right up, lay down, and listened attentively to the music, while his camels started roaming out into the desert. No problem. When the concert was over and it was time for the train to leave, he hopped on his horse, rounded up the camels easily, and headed off across the desert. 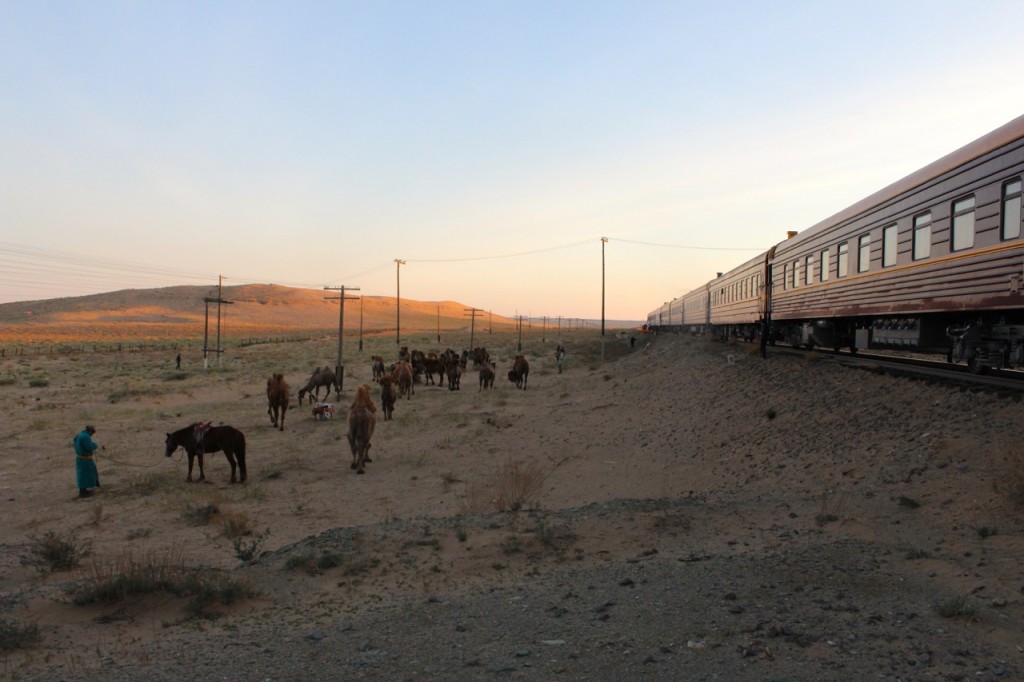 (Joe: As we returned to the dining car for breakfast around 8:30, we pondered two profound questions: how did Hans ever find these guys and how much did he pay them. But you have got to hand it to Hans. This guy knows how to run a tour and show his flock a good time.)