We have now been in Beijing for three days, and Joe suggested I type in my notes from my diary about what we have seen so far in this vast, bustling city. So here you go. 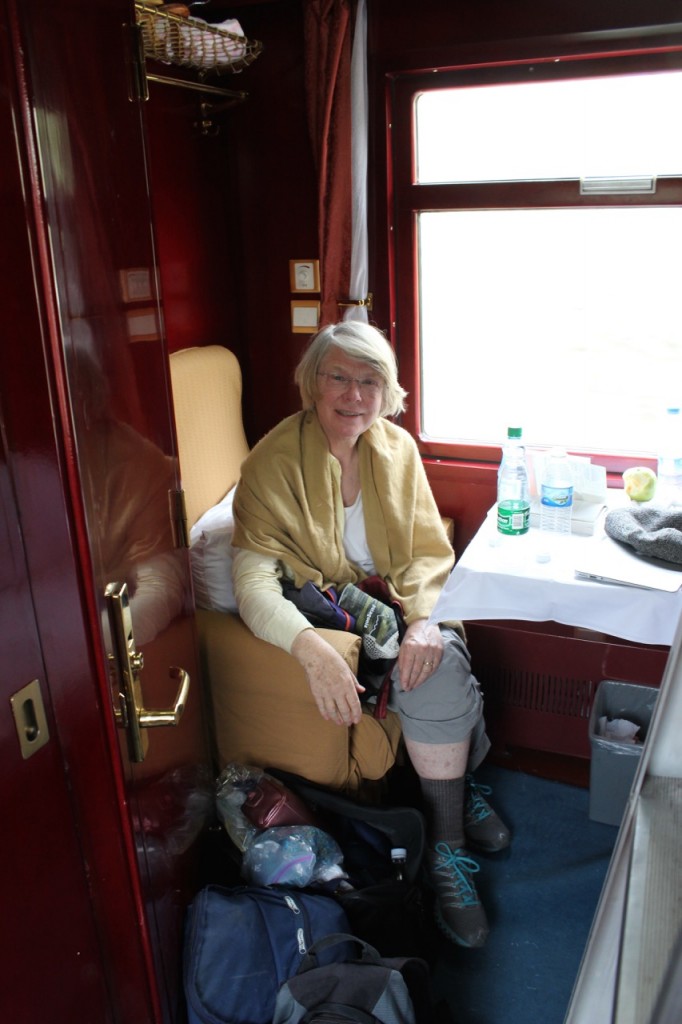 We enjoyed the beautiful scenery on the train from the Gobi Desert, which consisted of high mountains and valleys, just as you see in Chinese paintings through the ages. We arrived at the Beijing rail station about 10 am (dead tired from the 5 am wake-up in the Gobi). We met our local guide, and believe it or not we got on the bus and set off on a “forced march” to see the beautiful Temple of Heaven, the place of worship for China’s Ming (1368-1644) and Qing (1644-1911) Dynasty emperors. The site was number one on the list of top places to see in Beijing, given to us by our friends J.Vic and Judy from their recent trip to China. They described it as the “Taj Mahal and Angor Wat of China.” I agree that these ancient wooden buildings, continually painted and re-painted in bright colors, are stunning works of art. They were built beginning in the 15th century, and miraculously they were saved from fire and other forms of destruction throughout that long period, including during the Cultural Revolution. While most of China’s temples were taken down under the Communists, a lot of credit is now given to the efforts of Chou En Lai for using his influence with Mao to save some of the most important parts of China’s cultural heritage.

The Temple of Heaven was initially built beginning in 1420 by the third Ming emperor, Yongle, who usurped the throne and moved the capital to Beijing. (He also built the Forbidden City, described below). The Qing emperors maintained and rebuilt the Temple when they (the Manchus) conquered China (keeping the Ming designs and layout of the grounds). The emperors worshiped there with other officials, praying to “heaven” (not exactly the same as praying to a “God” but rather to the forces of nature and the ancestors who intervene) and offering sacrifices for good harvests, victories over enemies, and other important national needs. (This reminded me of the role of the Pharaoh in ancient Egypt.) The empress was allowed to worship with the emperor once a year, but no other women and only a few public officials were allowed in the Temple complex. One of the most beautiful buildings is called the “Circular Mound” (although it’s a building, not a mound), which is similar in design to round Chinese temples dating back thousands of years. In 1911 the “feudal system” (the PC term used here today for all imperial dynasties) was overthrown, and the Temple grounds were opened up to the public. It is now a UN-designated World Heritage Site. 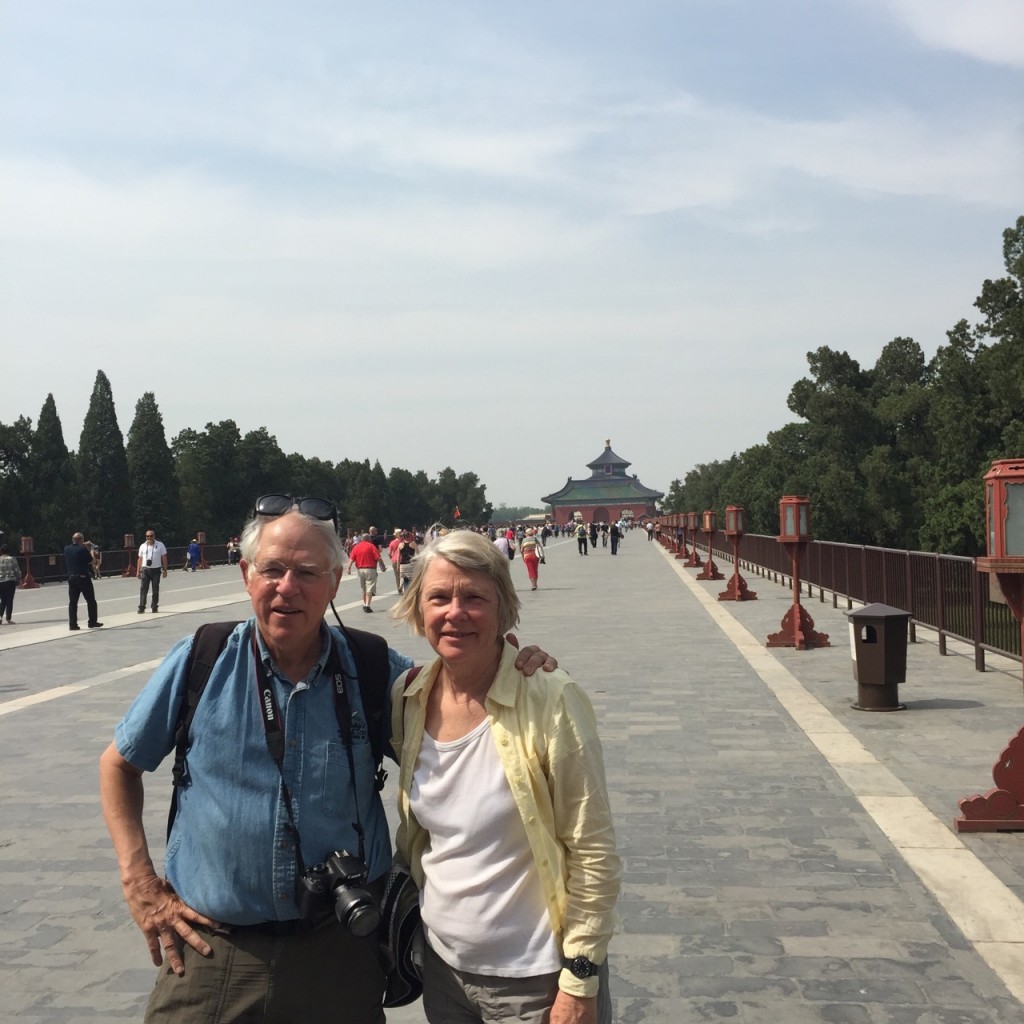 The next day was another “forced march,” although a great one. First we visited a pearl factory, on our way out of town to the Great Wall. Of course this is primarily a shopping opportunity, but we also saw how pearls are taken from the oysters. (We had seen a much more complete presentation of pearly making in Tahiti.)

The section of the Great Wall that we visited is about an hour and a half out of town and is in a beautiful, remote location surrounded by high mountains and forests. I took a pretty strenuous climb up steep steps to see two of the watchtowers. The stunning views and fresh breezes were a welcome change from hot, noisy, polluted Beijing, where it has been hard to see the sky each day.

The Great Wall was designed to keep out nomadic people invading China from the North (although it was ultimately unsuccessful). Still it is a mind-boggling construction project. It is a bit sad to contemplate that difficult labor; apparently at one time half the men in China were conscripted to work on it. On the other hand, it is almost a spiritual experience to walk up a passageway built so many centuries ago. It was built by the Ming Emperors but incorporated parts of the “long wall” started in the Qin Dynasty (around the time of Christ).

In the afternoon we visited the Ming Tombs, where numerous Ming Emperors (beginning with Yongle) are buried along with wives, concubines (in mass graves), children, and certain officials. There are elaborate wooden buildings, painted colorfully as with the Temple of Heaven. (These temples are not actually the graves, which are deep under the earth. Some have not even been found, although archeologists have been searching constantly for a long time. )

One of the nice things about this site is that the tombs are approached by the Spirit Road, where the Emperor processed to visit his ancestors each year and down which he was taken when he died. (I suppose he had some interesting thoughts as he made that journey, knowing that possibly the next time he went he would be in a coffin!) The Road is lined with beautiful carved statues and a lovely park that was not crowded the day we visited. The statues have been miraculously preserved given their age and the turmoil that China has experienced over the centuries. These statues represent–in an important order of priority as you process down the road–various dignitaries (not actual people, but types of people). The most important are officials in the emperor’s court, selected for their performance on exams, according to the Confucian system, not because of their relationship to the Emperor. Next come the warriors, followed by interesting animals representing strength (lions) and other qualities of the Emperor. 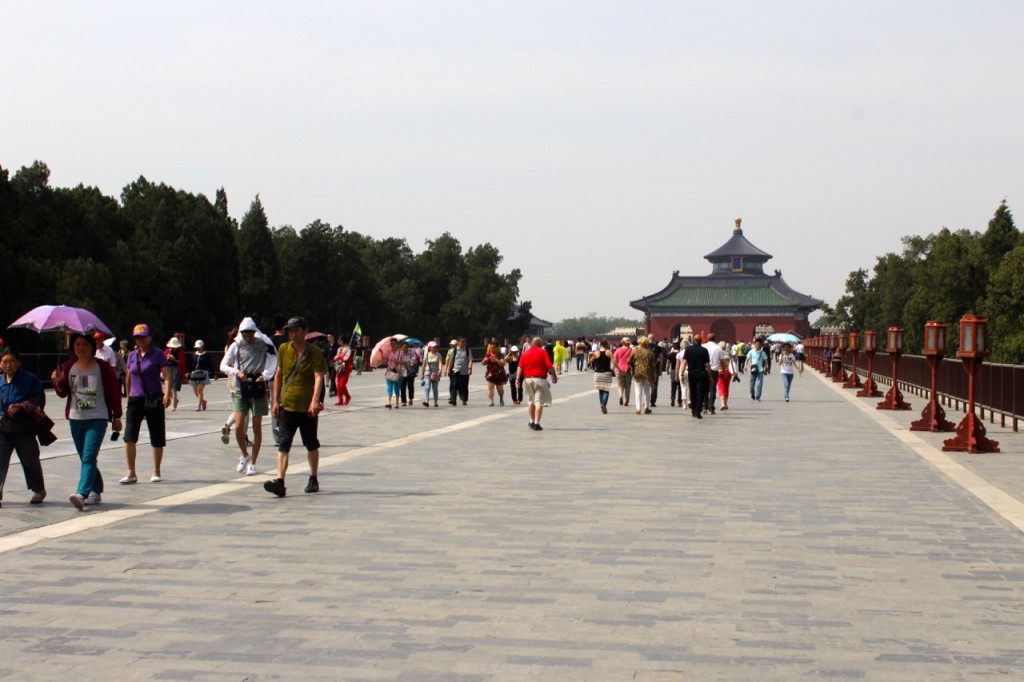 On our way back to town we drove through the Olympic Village and stopped at the “Birds Nest,” the main Olympic stadium, for a photo op. I had heard that it was designed by dissident artist Ai Wei Wei. Our guide, who must give PC commentary, said that “some in the West say it was designed by Ai Wei Wei.” There is definitely NOT freedom of speech in China! Facebook does not work at all, and our guide warned us ahead of time not to ask about the demonstrations in Tiananmen Square in 1989 while we are in the square. “There are police there; do not ask any political questions.”

After this we visited a tea shop and had a tea ceremony, where we sampled several delicious teas. (I liked the Oolong the best.) Again, this was a “shopping op,” but an enjoyable one. That was the end of another VERY exhausting day. (Joe stayed back at the hotel, nursing his “Joe crud.” I am so sorry he is missing all these interesting sites and experiences, but he visited Beijing in 1985 and did get to the Great Wall.)

The next day we visited two very crowded places, Tiananmen Square and the adjacent Forbidden City. This was Saturday, and Chinese families seemed to make up most of the crowd. They were in family groups from babies to grandparents. (All but one family that I observed had just one child, and all the children were seemingly happy and beloved.) Many of the Chinese tourists and all the others were clustered in groups around umbrellas held up by guides trying to keep their stray ducks in order.

The square still has the ubiquitous picture of Mao. This is repainted and rehung each year, and it has been redesigned three times. When I showed the picture to Joe he noticed immediately that it was much smaller and that Mao looked older than the picture he remembered. The memory of Mao is an interesting issue in contemporary China. Many older Chinese still revere him, and many younger people are aware of the problems he caused and do not. Our guide said it’s about 50/50, in terms of who likes him. In contrast, she said almost all (90%) revere Chou En Lai and 60% revere Deng Xiaoping. All three of these Communist leaders are buried in a mausoleum on the square. Chinese people were lined up in a very long line to see them. (Luckily, we didn’t go.)

Then we visited the vast complex of the Forbidden City where the Ming and Qing emperors resided. There are many, many massive wooden structures, all colorfully painted. The Emperor lived here with his wife, children, concubines, and the eunuchs who took care of them. (Did I hear right that one of the emperors had 20,000 concubines. Could that possibly be true?)

While it is possible to go inside many of the buildings, they are largely empty of the huge collection of furniture, paintings, and documents accumulated over centuries. These were mostly hauled off by the Chinese nationalists when they fled to Taiwan, where they now apparently can be seen in a museum. (Not surprisingly, this is one of many points of conflict between the two countries.) Still the architectural details are so beautiful. I particularly like the carved marble balustrades, each of which has a beautiful carving of a dragon. I also like the ceramic processions of people, animals, and gargoyle-like monsters that grace the roofs of the pagodas. 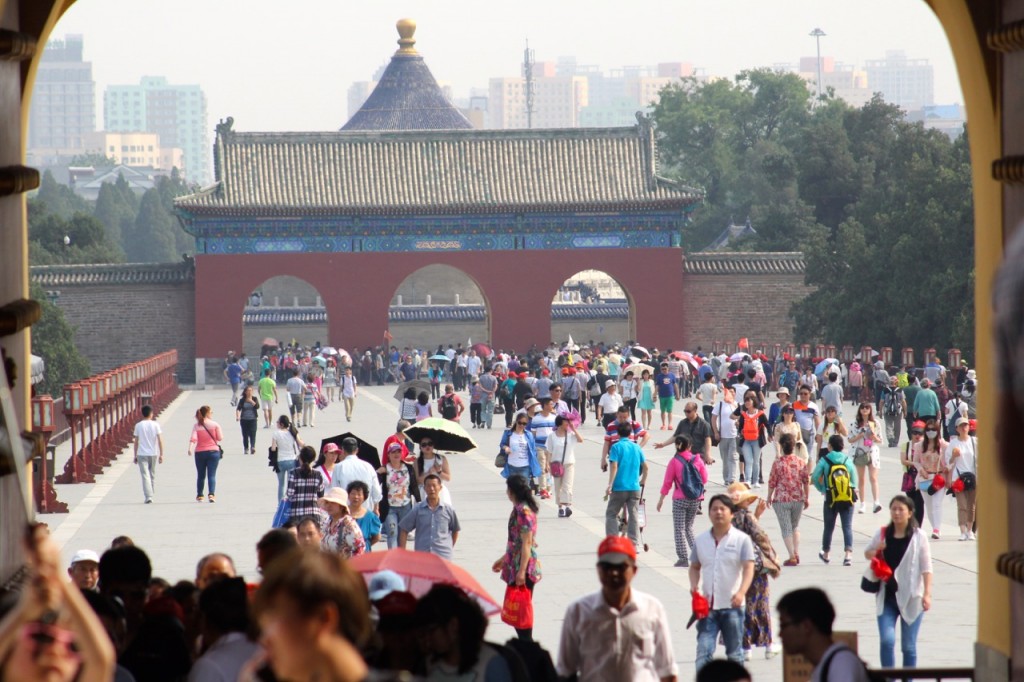 We climbed the hill to a Buddhist temple at the top, where it was possible to look down on the whole vast complex. It is so easy to understand why there was a revolution overturning imperial rule. The whole thing was set up and maintained for the benefit of one person, and financed by the labor of everyone else in the country. While it lasted for centuries, at last something had to change and it finally did. The results are still evolving, but no one in China seems to have a bit of nostalgia (in contrast to Russia) for those “feudal times.”