We cleared Mongolia customs and China passport control without much ado. Hans proudly announced that he had “worked out a deal” with the Mongolian army troops guarding the border to move all our luggage for us (which they did in style, goose stepping and saluting). I don’t know if Hans had to pay off anyone else and we did not ask. We said goodbye to our extraordinary guide, Katya, as we all lined up to give her a hug and wish her well for her marriage in August. Our guide for the next three days will be Chinese. When we arrive in Beijing, Hans informed us we will have traveled almost 8,000 kilometers or almost 5,000 miles. Combine that with our journey to get to Moscow and my estimate is that we are close to the 10,000 mile mark. We are also just over half way in terms of time (day 69), so that makes sense.

So on to China! We are going to be here for almost a month, so we will see and learn much. The first three days we will be with our Siberian tour group, which will visit the major tourist sights in Beijing. Then when the tour breaks up, we will be met by the first of several private guides in various cities, who will guide us along the itinerary we arranged through Asia Trans Pacific.

This is not my first time in China. I visited China in 1986 as part of a US Delegation on housing. The idea was to bring US housing development expertise to China, which at the time was just coming out of the Cultural Revolution. The timing was perfect. Nixon’s ping pong diplomacy had broken down barriers, and the Chinese were anxious to be our friends. They clearly could use some help since we were told that no new housing construction had taken place for over 15 years. There was literally nothing new in the country. The only thing close to a high rise were the colonial administrative buildings built by the Brits in Shanghai in the Nineteenth Century, and they were under 10 stories. The Chinese infrastructure was old and falling apart. Hardly anyone owned a car. Both heating and cooking were usually accomplished by charcoal burning stoves. Electricity was limited and unreliable. Roads were often narrow and unpaved. Buses were always jammed packed and subways non existent. There was only one first class hotel in all of Beijing,

The Chinese were eager to move on. We told them to build houses. They did. I was looking forward to seeing what they looked like.

I was soon to find an answer. We found ourselves in the border town of Erlian when we emerged from passport control. Chinese buses transported us from the border to a hotel where we were greeted by our new Chinese guide, Lily, had lunch of countless, delicious Chinese food dishes, which just kept coming, and took a tour of Erlian, which included the new Dinosaur National Park (the site of numerous bone discoveries) and then the rest of the area. The dinosaur museum, which opened a few years ago, occupied several hundred acres at the edge of the Gobi desert and included three museum buildings displaying dinosaur bones and rocks. Several dozen bronze and metal replicas of various types of dinosaurs were placed in seemingly random spots in the desert surrounding the buildings. The overall quality of the exhibits and design of the buildings were quite good. However, except for a couple of local visitors (One, a father, asked if he could pose with us for his wife to take a photo.), the 100 or so people in our group were the only people visiting the museum, making the experience a bit weird. 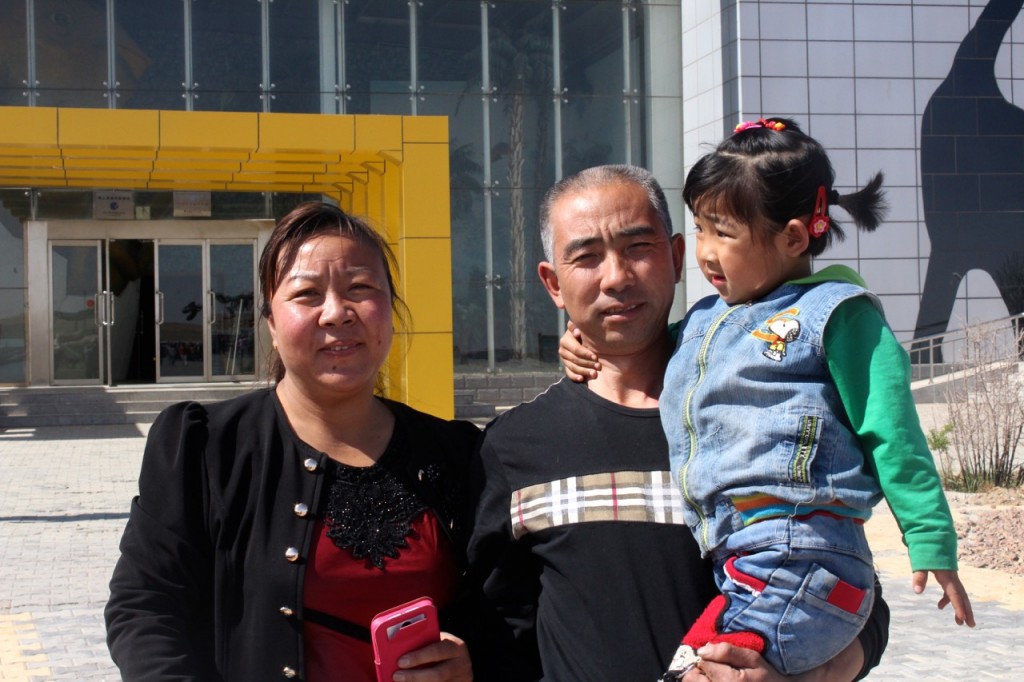 After an hour and a half of wandering around among the dinosaur statues (which was about an hour more than we needed), we boarded the bus for a tour of the city, which was described as a very small town—about 120,000 people—without much of interest except the dinosaur park. Basically we were killing time until we could board the train headed for Beijing.

It was only minutes before we were on a divided, four-lane main street, which went on for mile after mile. Side streets were also wide and most included wide sidewalks and separate paths for bikes, and these side streets extended at right angles from the main street almost as far as you could see. New trees had been planted along the roads.

For the first few miles brand new, huge apartment complexes of 10-15 stories lined the main street and many of the side streets. Then you would drive for a block or two past vacant lots with only sand and scrub brush, and then on the next block would be more high rises, most of them very attractive. One building in the distance looked at lot like the famous opera building in Sydney, Australia. Many other structures were under construction. I stopped counting after awhile, but there had to be tens of thousands of units in hundreds of brand new buildings. Parks and plazas appeared every few blocks and then more open space with more statues of dinosaurs. A city planners dream, I thought, remembering the New Town Movement from my city planning school days in Chapel Hill. Toward the end where there was a huge overpass created by two huge dinosaur sculptures, we stopped to take photos. A large wind farm surrounded the sculptures with windmills stretching into the horizon. 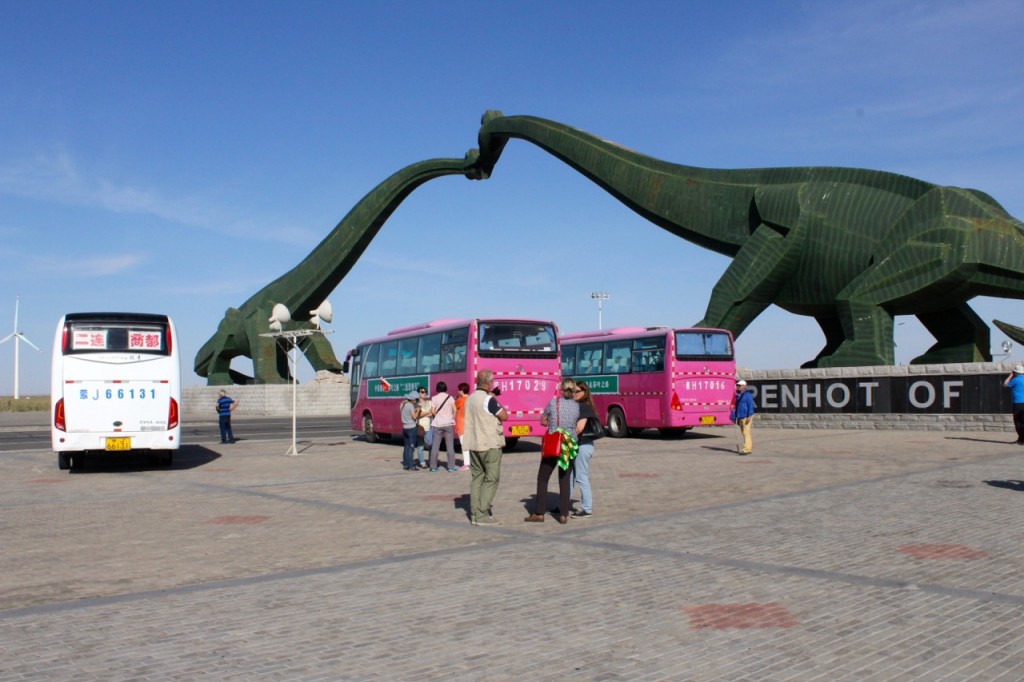 There was only one thing missing from all this: people. They were nowhere to be seen. We were in fact driving trough a modern day ghost town. No people, no cars, vacant storefronts. It could have been a movie set.

When I asked our guide to explain what was going on, she shrugged her shoulders as if to say she did not know what I was talking about. So I asked specifically, how many of these new buildings were occupied, to which she replied, not many. When I pressed harder, she shrugged again and commented casually, “Nobody wants to live here. Cold in winter, hot in summer, no jobs.”

Welcome to the New China!

Embry commented, “Well, when you were here in 1986, you told them to build houses and they followed your advice. Maybe you should be a little more careful what you say next time.”

Whether this is representative of the New China or not is yet to be determined. When I asked Hans about it, he said that while there is a lot of overbuilding in China, eventually most of these new cities fill up, and it is a delicate balancing act to coordinate job creation with housing production. Thinking back again to my Chapel Hill days, I remember that in our own New Town Movement in the US in the 1960s, most federally insured new towns failed initially because of that same problem—not having the jobs to attract the people. While the development effort in Erlian     appears out of sync with housing demand, Hans says there are many more examples of similar efforts that have created new towns with millions of people, all happening within one or two decades. The next day our train would pass by one of those “new towns,” and we would get a glimpse for ourselves.

The evening following the tour included a stop at a surprisingly huge and bustling market (So despite the empty buildings, plenty of people must be living in the old part of Erlian.) and a “hot pot” dinner (Mongolian specialty) in a hotel in the old part of town. After dinner we boarded a commercial train to Beijing, which like every other train we have been on, departed exactly on time—this time at 9:16 pm. The train was very much like the Russian train, which had been our home for over a week and somewhat newer with elegant finishes to the compartments. Toilets—emptying directly onto the tracks—were at each end of our car, and we shared a wash room with Joyce, who was in the next compartment.

We woke up very early the next day—around 5:30 am—and spent the time watching the scenery, which was as spectacular as you will ever see—towering jagged peaks, going straight up with a sparkling river winding through the valley below the train tracks. Small, ancient villages with dusty, dirt streets and crumbling walls and tile-roofed homes appeared from time to time; and when the valleys widened, we could see farmers with traditional round hats in the fields, bending down, planting and weeding. 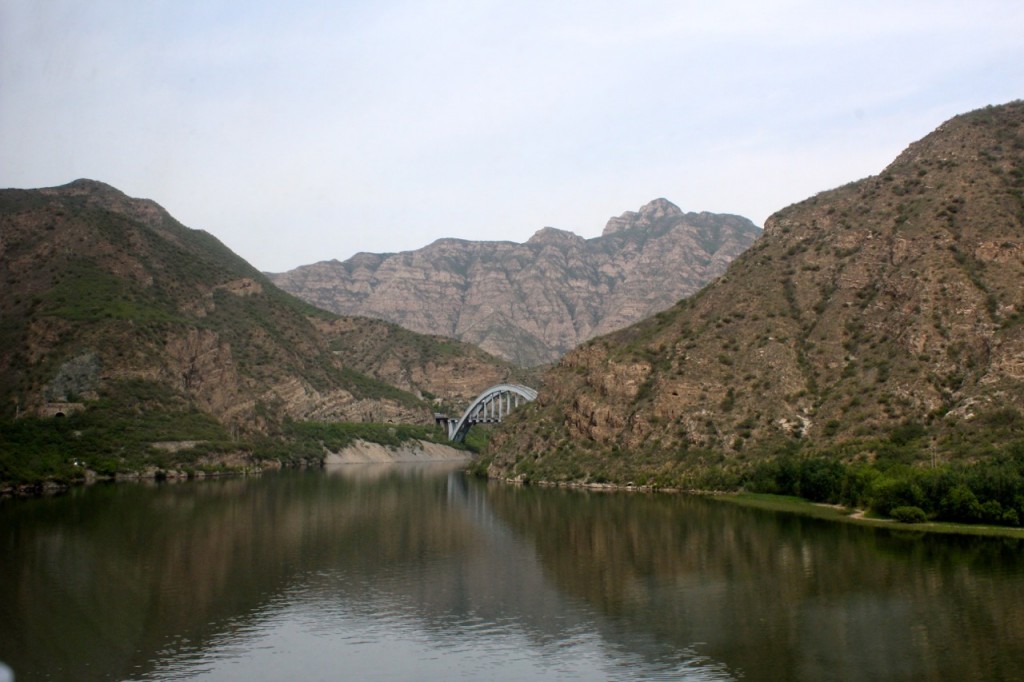 Along the way we also passed through several larger towns. One of these was Zhangiakou. What made this interesting was that the ancient, dusty villages lining the railroad tracks were just like the other villages we had passed except that right behind them were gigantic, modern 20-30 story apartment buildings, which extended for miles. Unlike in Erlian, however, there was plenty of activity on the streets. Hans later told me the city had grown in the last 10 years from a few hundred thousand to over three million. Tower cranes everywhere indicated the growth was still going on. 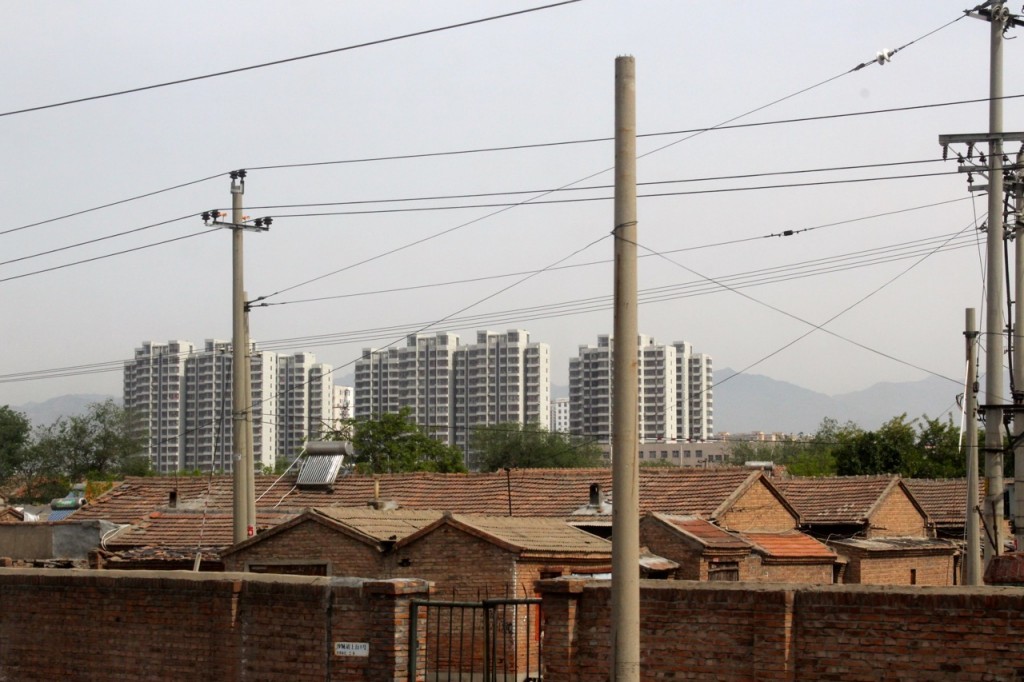 As our train got closer to Beijing, the mountains disappeared, and we soon found ourselves in the middle of a vast landscape of concrete and brick and marble buildings towering into the sky. Some were showing their age, but the vast majority appeared very new and for the most part very attractive. If I had been blindfolded and suddenly had it removed and asked where I was, I would have guessed maybe Las Vegas, Los Angeles, or perhaps Miami along Biscayne Bay. Who knows? Some glitzy, growing city on the make, flexing its muscle, strutting its stuff, with new, showy buildings, some gorgeous, some not, expensive shops for rich people to spend their money, fancy restaurants–exactly the kind of place that I would definitely not want to live in. And then I recalled the images of 1986, less than 30 years ago, of the drab, grey decaying buildings, the bike-filled streets and signs of poverty everywhere and wondered if this could possibly be the same place.

Is this China? Are we really in Beijing? Or is it just a dream?

We have about three more weeks to find out. 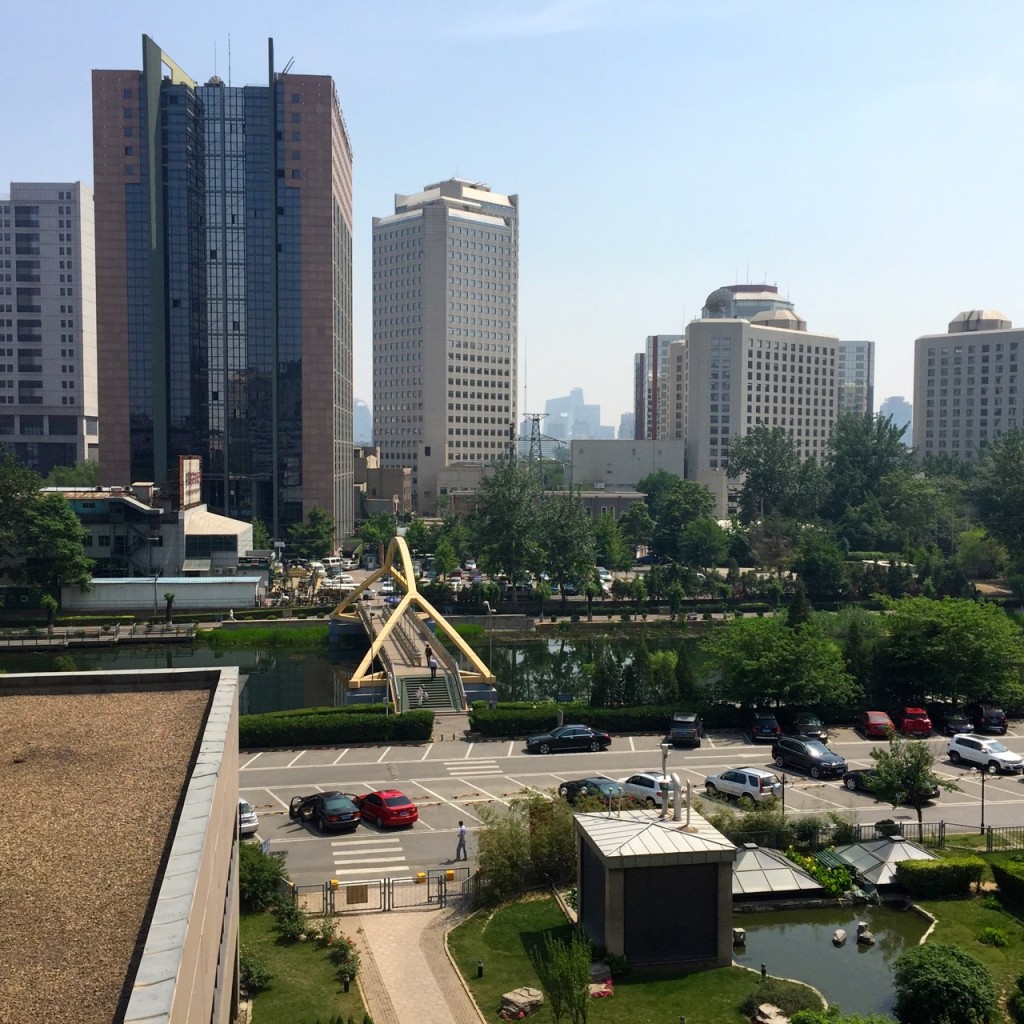