We are on the bullet train to Taiyuan, a town about 350 miles southwest of Beijing. The 20-car train left exactly on time, and averaging about 185 mph, it is even smoother and fancier than the European high speed trains. Only twenty minutes after departing Beijing, we are in farm country with cultivated fields taking up every available inch of space, a large number of which are tree farms. The only problem is that it is hard to see the countryside because of the dense smog, which was present when we left Beijing, and after almost 100 miles is still so thick that visibility is limited to several hundred yards. While during our week in Beijing we experienced generally poor air quality, this day is by far the worst. 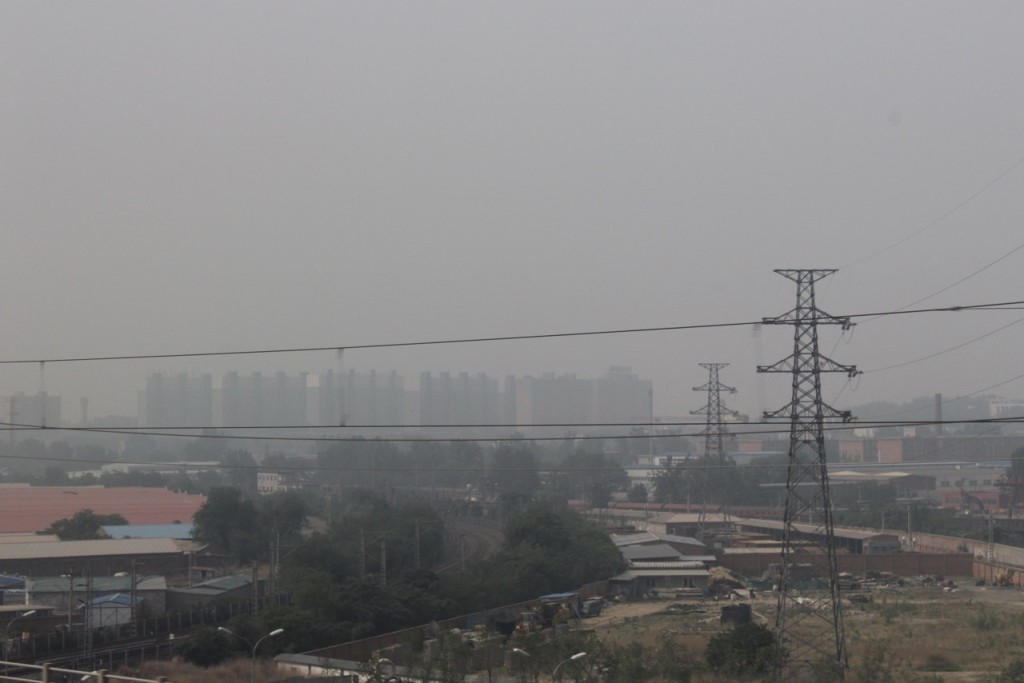 But what a week in Beijing it was! Despite temperatures near 100 degrees and my health problems ( I am continuing to slowly get my strength back), I was able to enjoy the experience. The second hotel we stayed in—the Red Garden Inn—was the best yet, a true gem of peace and serenity in the middle of one of the world’s busiest cities. We enjoyed a farewell meal last evening with Pat and Chris (the couple on the tour who live in Ireland) in the peaceful courtyard of the inn. Our guide, Ben, was also terrific—well organized, smart, knowledgeable and flexible, a true master guide in every respect.

Ben(not his real name, of course, and it seems all the Chinese English speaking guides have Anglicized nick names) is 62. From age 17-25, when the Cultural Revolution was in full swing, he was ordered by the government to work on a farm in Inner Mongolia. During this time colleges were closed so he missed that opportunity along with almost everyone else in his generation. He learned English on his own (and speaks extremely well), attended tour guide school in the late 1970s when China was starting to promote tourism and has been a guide ever since. His daughter recently earned a masters degree from Cornell and is living and working in New York City, and he has led several Chinese tourist groups to the US. Not one hint of remorse or sour grapes from him or for that matter any negative comments about the government. In fact despite what he experienced as a young man, he remains a fan of Mao. 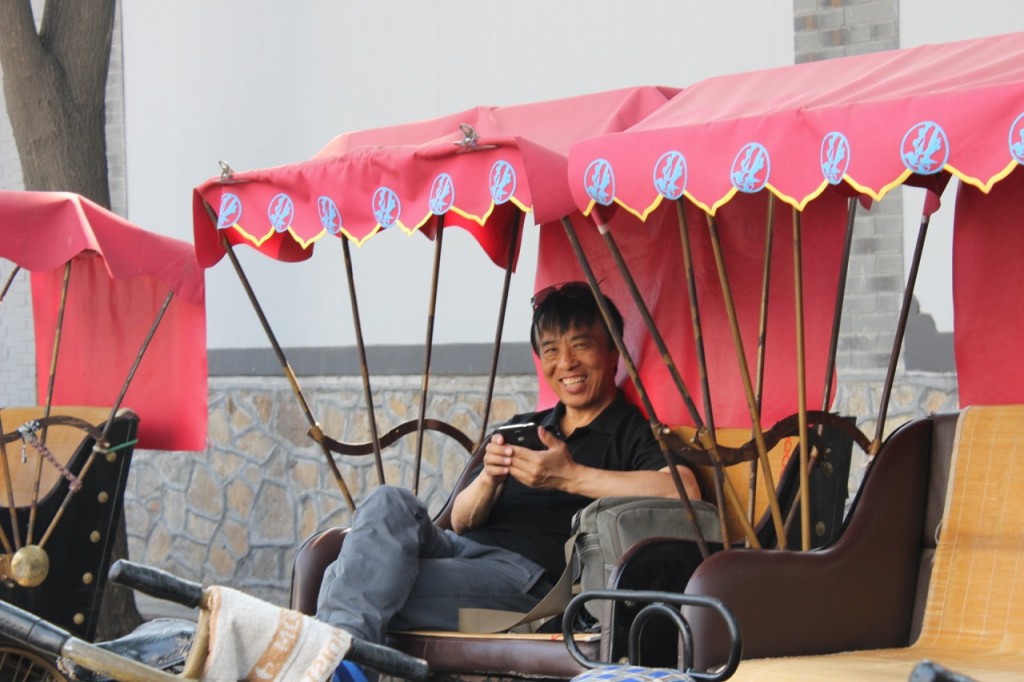 I have to say that the China we have experienced so far is as clouded in mystery as the landscape we are racing through is clouded in smog. The construction that has taken place over the past 30 years has got to be a world record. Though there are some older areas like the Hutong District with tiny houses and narrow streets (now protected as a historic district, by the way) and we are told that some neighborhoods reflect extreme poverty (none that we have seen), what stands out is the newness of everything and the often stunning and generally tasteful architecture. But that is just the beginning: Trains are the best in the world. Unemployment is low and a huge middle class has been created. People seem to be happy, work hard, and always on the move. We have not seen one panhandler or any evidence of homelessness. Food is plentiful and delicious, restaurants crowded. Prices to us appear reasonable. And most miraculous of all: we have not seen one word of graffiti. Anywhere. Traffic and air pollution and overbuilding are big problems, but the Chinese are working on them. Many are fearful that economic disparities are eroding some of the gains made between 1980 and 2000 and the social safety net is eroding further, but despite this, on one level at least, we are witnessing one of the most spectacular turnarounds in world history.

On the other hand, though China is Communist in name only, it remains a totalitarian state. Freedom of speech is limited. There is no free press. Facebook, Google, Twitter, and Wikipedia are not accessible on the internet. You can’t get the New York Times on line. There are certain aspects of personal behavior, like the one child policy, which profoundly impact individuals. People whisper about cronyism and how high level officials get all the good deals. No one, however, criticizes the government very loud.

Mao’s image still appears prominently in Tiananmen Square and despite a legacy of an estimated 40 million deaths during the famine associated with  the Great Leap Forward and the upheavals of the  Cultural Revolution, is revered by many. One person told us that there is nothing available in school or anywhere else about the Cultural Revolution or the disasters associated with some of Mao’s “reforms” and that we probably know a lot more about that than the typical Chinese person does. (Compare Russia where Stalin is now viewed as an anti hero.)

So one question is why the iron fist. Thousands of Chinese study in US colleges every year. Thousands more Chinese now tour the US. It is not that Chinese people have no exposure to the West. What are the Chinese leaders afraid of when they are sitting on  a huge success story. Why not allow for more personal freedoms? I have asked this politically incorrect question to our various guides and have not gotten an answer. People do not go there.

One possible partial answer might be found in China’s 4,000 plus year history where centuries of empires and dynasties and tight government control have alternated with periods of decline, civil war and chaos. It could happen again. This is a country of almost 1.4 billion people, about sixty different ethnic groups, over 250 different dialects (but only one written language). Having experienced total chaos in the first half of the last century (and also during the Cultural Revolution), China is now in a period of stability and tight government control. It is producing wealth and has improved the lives of hundreds of millions of its citizens. Given their history of control or chaos, you can see how they could view the options as either/or. Providing more individual freedom could be viewed as a Pandora’s box. You open it up, and you don’t know what you will get. No one wants chaos. Their thinking may be that maintaining order with an iron fist is the price you have to pay. 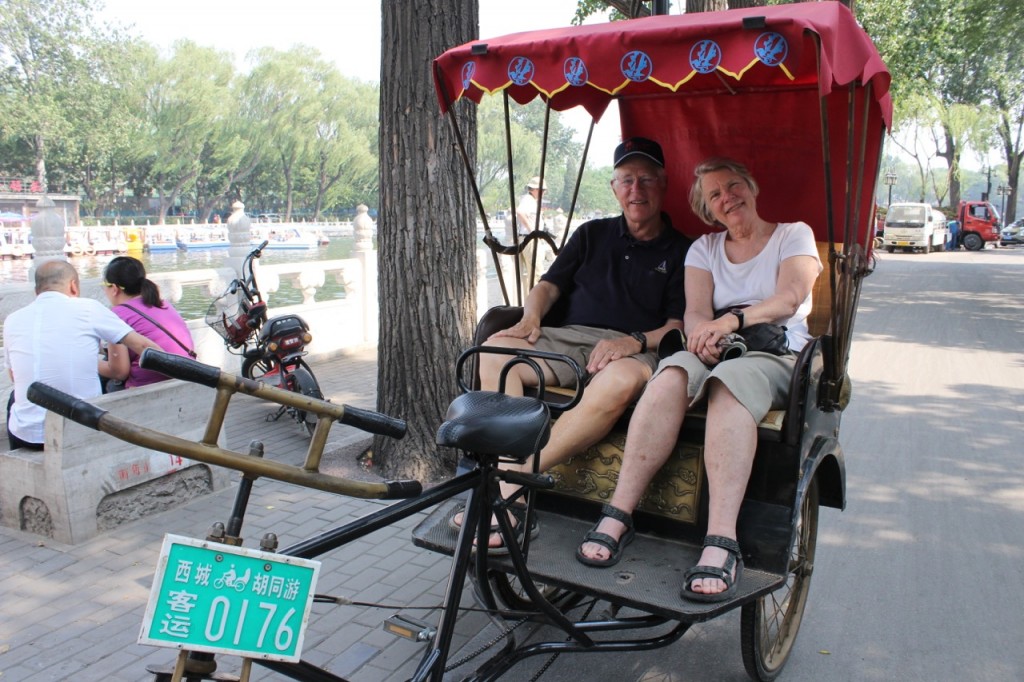 Who knows? We still have almost three more weeks here. Perhaps the smog and mysterious clouds will thin out and we will begin to understand better what this extraordinary country is all about.