We are now in Pingtao, located about 400 miles southwest of Beijing and the oldest and best preserved walled town in China, with a history dating back some 2,700 years and buildings dating back to the 900s. It is a miracle the Red Guard did not destroy this town in the 1960s when they were destroying everything else of antiquity that they could get their hands on. In fact we were told that had not Chou ordered the army to protect the Forbidden City, Temple of Heaven and other Chinese treasures, they would have destroyed them as well. But Pingtao was located in a forgotten, out-of-the-way place, and nobody thought much about it. In the 1980s when tourism was getting started again, somebody got the idea this might be a tourist destination. Bingo! Today it is one of the most popular tourist attractions in China, a World Heritage site and a well deserved one.

But I am getting ahead of myself.

The trip from Beijing to Taiyuan was uneventful with our train arriving on time as has every single train we have taken during the entire trip. A city of over 3.5 million, Taiyuan is a center for manufacturing and mining and not a tourist attraction. We were met by Jenny, our guide for the next two days, who suggested we get out of this bustling, somewhat raw town as quickly as possible. After a quick lunch, we began the two hour-long drive to Pingtao. This was the first time we had been on Chinese highways. Our driver was excellent as was the driver in Beijing, but driving in China is not the same as driving in the US. At one point, I commented to Embry that this was the most terrifying ride I had ever been on, and then she reminded me that India was far worse because there in addition to wild and crazy drivers you also had sheep, cows, camels and even elephants to watch out for. Here it was mainly other drivers and huge 26-wheel, behemoth trucks.

Drivers in China also seem to drive with their horn as much as their steering wheels. The rule of the road here, as in India, seems to be that the big guy wins, so you can be as aggressive as you want with approaching smaller cars, but you do not mess with the behemoths. I was certain several times that a head on collision was unavoidable. The main issue has to do with the way the roads are designed. There are two fairly wide lanes and a shoulder, and for the most part the roads are new and in good condition. The problem is that the two-lane roads are wide enough so that there is actually room to pass in a non existent middle lane—barely enough. Of course, the roads are jammed with traffic, even in somewhat remote locations like the road between Taiyuan and Pingtao, and everybody passes all the time using the non existent, middle lane. This usually works out ok since the roads are wide enough to squeeze between the car or truck you are passing and the one coming at you from the opposite direction, but not if someone else coming from the other direction decides to pass at the same time. This is when the Big Guy Rule takes effect, so if the vehicle coming from the other direction is bigger—or God forbid, a 26 wheeler—you dodge back into an opening if one is available. Actually this is a lot like sailboat racing as boats vie for position when rounding the weather mark. While there is no “starboard right-of-way” or “room at the mark” rule, the slower cars seem to understand, slow down and give you a space to dodge into. If they don’t, it is curtains. But it is curtains for them too, so the other drivers oblige and make room. As for me, after awhile of watching this, I just tighten my seat belt, hold my breath, and put my hands over my eyes every time it is our turn to pass in the middle lane.

We made two stops along the way—one, a well preserved, walled village which in the 19th Century belonged to an extended wealthy family and the other a Buddhist temple dating back to the 900s. Getting to the Buddhist temple turned out to be a challenge since an elderly lady was positioned in the middle of the dusty road with her bike blocking our lane and several tin wash bowls laid out across the other lane. Cars were lined up patiently waiting in the other lane, but our lane was clear except for the bicycle. Both our guide and driver got out and walked over to the old lady where they both gestured consternation and disgust. A few minutes later they returned to report apologetically that she would not budge. Apparently her son had been injured by an automobile, lost a leg, and she was demanding reparations from all who passed by. It would have been very easy simply to pick up her bike and move it out of the way, but our driver and guide honored her wishes, and we drove on to find another way to get to the Buddhist temple. Since she was not asking for much, only a few yuan, I wondered why our guide did not just give her the money. 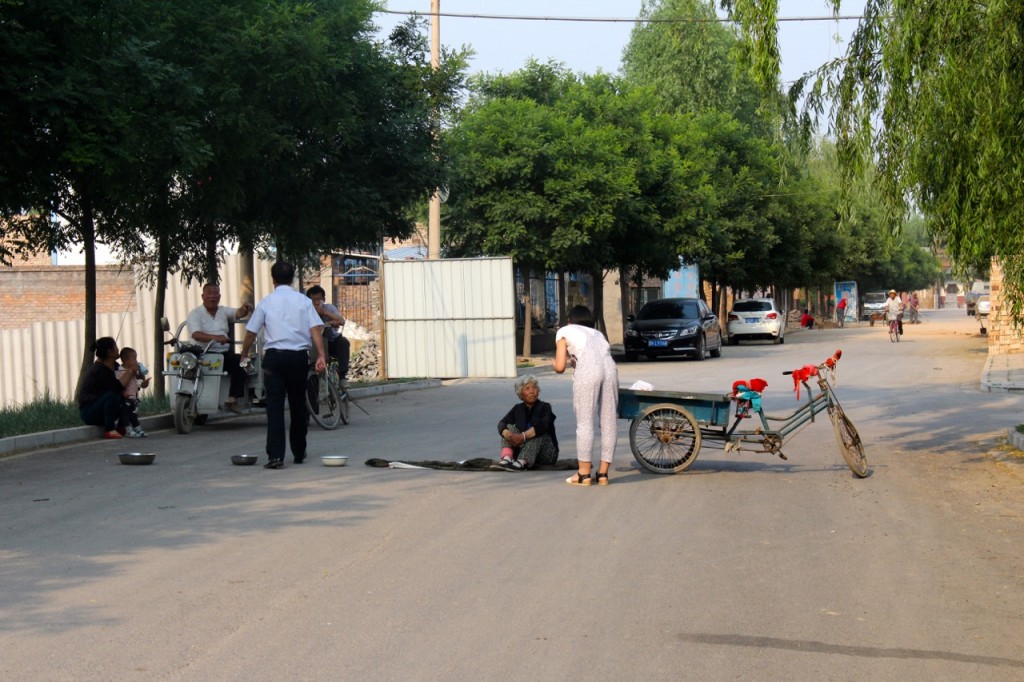 By late afternoon we reached Pingao, where we drove through heavy traffic and countless gas stations, mechanic shops and junk yards to reach the gate into the old city. There we abandoned the car–no cars allowed inside the walls–and boarded a golf cart, which took us, our guide and baggage down narrow streets and eventually to our hotel. The side streets were mostly empty, but the major streets with all the shops were jammed with people.

I am writing this post from the dining room of “Jing’s Residence,” which is a 15 room converted private mansion (along with other previous uses such as a photography studio and small factory) several hundred years old. Madam Jing, a wealthy business woman, purchased the abandoned building several years ago and over four years restored it to a world class boutique hotel with exquisite wood carvings and Chinese wall hangings and artifacts. It is a true gem and the nicest hotel yet. The only puzzling thing is that the first night we were the only guests, and last night there was only one other guest, a couple from Singapore. That has not kept us from enjoying the excellent food and service, however, or our comfortable and beautiful room. 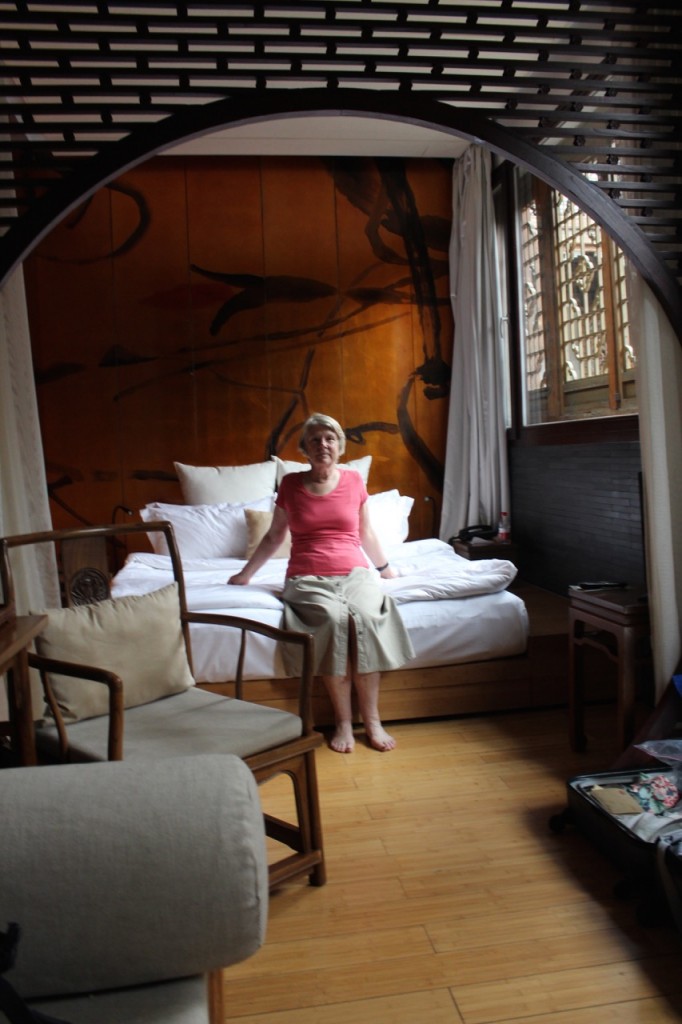 But what really makes this special is that as I sit here and type out a blog post in the dining room, I get to watch the world pass by—people on bikes, some walking, many families with their one child in tow, some older folks with canes, some school groups—almost all Asian, mainly, I suppose, Chinese. I look at them. They look at me. I occasionally take a photo of them. The tourists—the ones with the Canon cameras, probably from Korea or Japan or Beijing– occasionally take a photo of me. 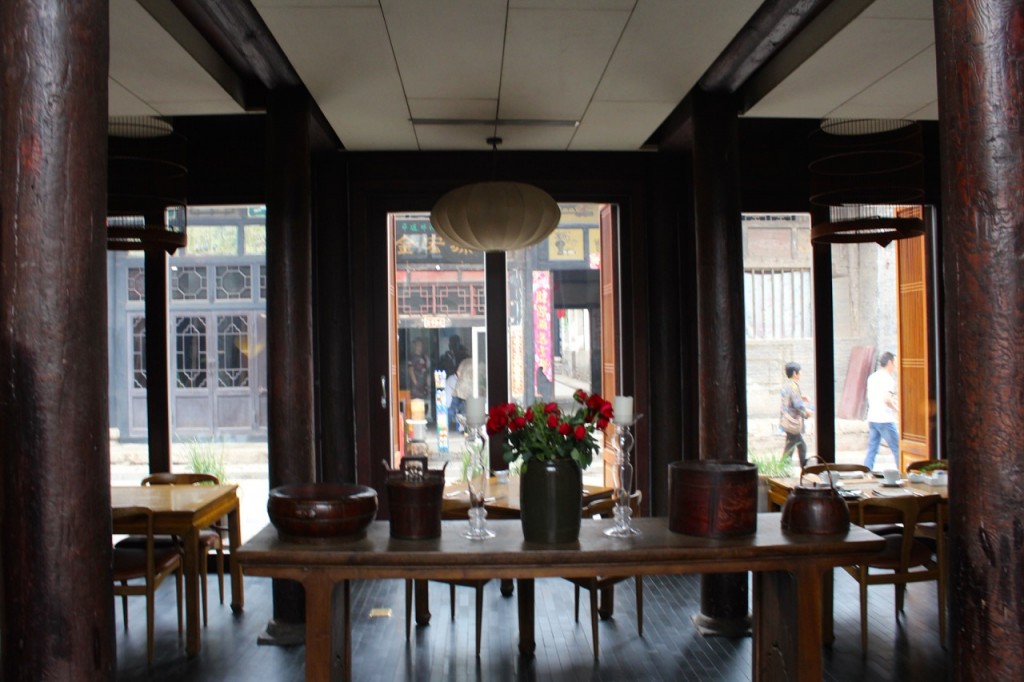 Directly across the street is a mom-and-pop street vendor selling soup, bottled water and other street food, and every now and then people stop there, though they seem to be mainly locals and not tourists, and some just hang out. The mother is there during the day. The father returns from work somewhere else late in the day, and we watch them and their teenage son enjoy dinner each evening as they watch us enjoy ours. Actually we are not really sure how many people live there because all sorts of people of all ages come and go all day. Next door to them is a small shop where an old man sits out front most of the time, and we are not sure what, if anything, he is selling, and next to him is a very modest residence where a mother and teenage daughter spend most of their time sitting on their front steps and like me, watch the world go by. I could sit here all day and not get bored. 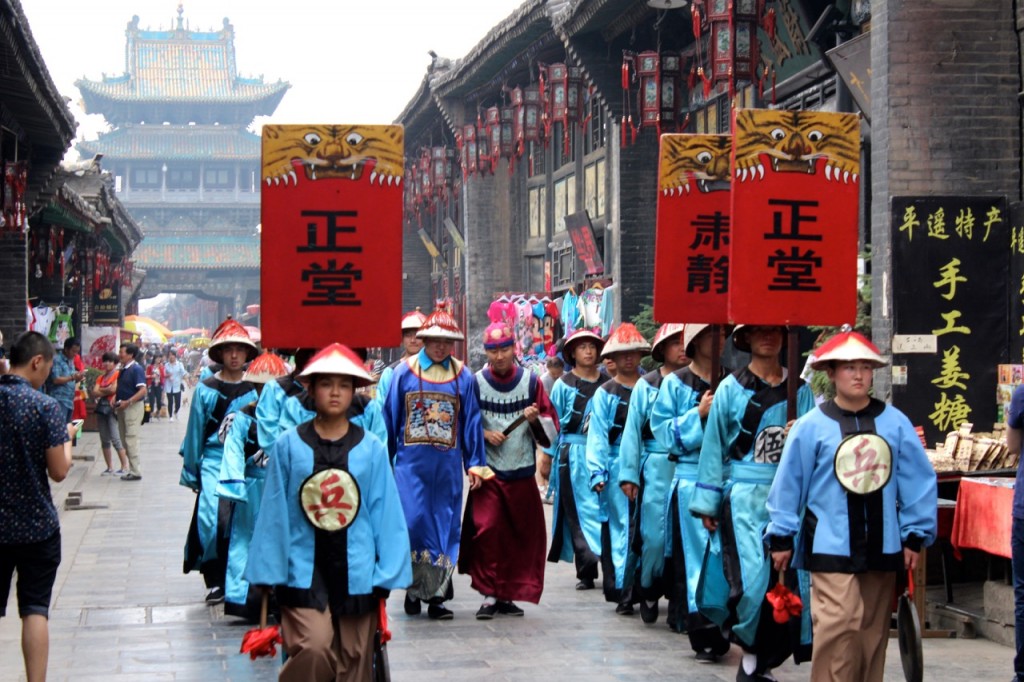 So that is life in Pingtao. We did get a full walking tour of the city yesterday with our excellent guide, a very sharp young woman in her early thirties, and saw much but by no means all of the city. It is actually pretty big. The wall is square with each side being about a mile long, and there are well over a thousand ancient homes—all built along narrow, cobblestoned streets and all with courtyards and tile roofs. On any given day we are told there are over 500 vendors and tourists numbering well into the many thousands. Embry is out today on a bike exploring the parts of the city we did not see yesterday. I am taking it easy, still trying to recover from the Meltdown and enjoying watching the world go by.