Last post before we board the container ship, the Hanjin Copenhagen, to cross the Pacific Ocean, arriving in Seattle (hopefully) on July 3. Time for a few more concluding thoughts about China: 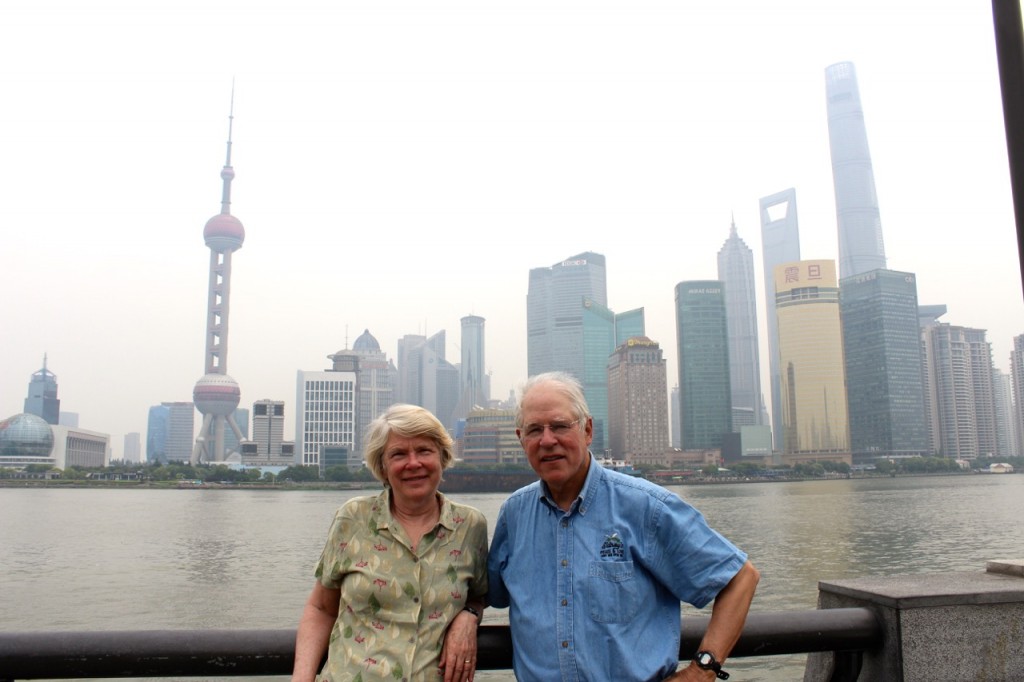 One could thoughtfully ask how I can be so generally positive about a country that is basically a totalitarian-lite state and a potential adversary of the U.S.? You might even suggest that I may have been duped by these nice guides who are actually Communist agents in disguise, feeding us gullible tourists a bill of goods, to which I have but one answer: come to China and see for yourself.

Do the extraordinary gains made by this country in the last 30 years mean that they are out of the woods? Far from it. China faces enormous challenges, and here are the top six in my view, in order of importance:

The environmental challenge. When you can’t breathe in your nation’s capital, it is not a good thing. Most of the big cities in north China are affected by extremely poor air quality because it is arid with not enough rain to wash out the pollution. There are two main culprits—low grade coal used as the main energy source and lower automobile emission control standards than we have in the U.S. The Chinese seem to understand they have to address environmental issues and are doing some important things like high speed rail, wind farms, and dams, but will that be enough? The consensus seems to be that until they radically reduce fossil fuel emissions, it is a stretch. Alternative energy sources are an essential piece of the puzzle. How successful they are affects the entire planet, not just China.

The demographic challenge. The one child policy is a two-sided coin. It has drastically reduced China’s population growth and that is a good thing, but it has been ruthlessly implemented by forcing abortions and has also produced a population where boys outnumber girls, 120 boys for every 100 girls. That one spells trouble for sure. It is also producing a demographic imbalance with not enough adult children to take care of aging parents and an adverse dependency ratio like you see in Japan and parts of Europe and even in the U.S.: too many seniors on social security and not enough wage earners to support them. The policy is now being relaxed but will need to be tweaked and monitored.

The one percent challenge. You have got to admit that when they do things in China, they do things in a big way—the Great Wall, the Grand Canal, Communism, Land Reform, the Cultural Revolution, the Three Gorges Dam. So when they decided in the 1980s to go “free market,” they pretty much opened the flood gates. The result has been capitalism on steroids with a relatively few people making a whole lot of money. The rising tide has lifted a lot of boats—literally hundreds of millions of people—but some boats have been lifted a lot higher than others. My guess is that their one percent problem is similar to ours, and we occasionally saw signs of resentment among average Chinese people with words like “justice” and “fairness” and “cronyism” popping up every now and then. If they are not careful, China may find itself going back to a kind of neo class system not all that dissimilar to what existed before the Communist Revolution. We heard lots of complaints about how rich people were able to pay for tutors for their kids and even send them to U.S. prep schools so they could get the high test scores and get into the prestigious colleges, in another words a meritocracy with strings. How familiar is this to us Americans?

The over building challenge. This one is related to the one percent challenge. I read somewhere that China has invested the highest percentage of its GDP in real estate and infrastructure development of any country, any time in history. The results are spellbinding—sparkling, dramatic skylines, high speed trains, vast subway systems, superhighways and no visible signs of poverty like deteriorating neighborhoods or informal settlements like you see in India, Latin America or Africa. They have nothing equivalent to an “American slum,” and believe me, I have looked for it.

There are also a lot of vacant, brand new (and not so new) buildings—a huge number—and yet tower cranes continue to dot the landscape everywhere. You don’t build a 50-story, 400-unit, high rise and watch it sit empty for a few years and put a lot of profits in the bank. In fact you lose your shirt, and somebody—no one has been able to tell me exactly who—has got to be absorbing massive losses. Many of these deals are supposedly joint ventures, with the government being not just the land owner but also co-developer, (Yes, the government still owns all the land in China and leases it back, long term, to private owners, developers, and farmers, really the only vestige of Communism left as far as I can tell.), so maybe the tax payer is the fall guy. One thing is for sure: somebody is taking a hit, and this can’t go on forever. Given the size of the population and the growth of cities, people tell us that there are plenty of people to buy or rent these units, it is a matter of affordability. Whatever it is, it needs to be fixed. The problem is that curtailing construction will mean substantial job losses impacting the entire economy. 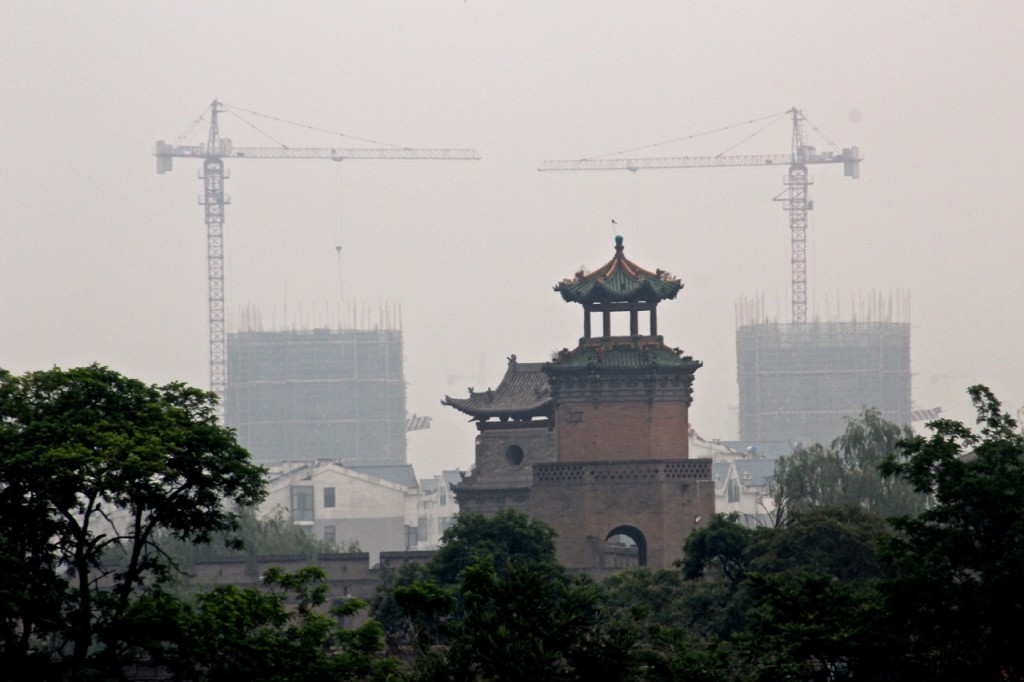 The social safety net challenge. When you get down to it, it is amazing how many of the problems China is dealing with are similar to ours. We heard lots of complaining about mediocre health care and how it is paid for, inadequate social security and a safety net that is too thin. Sound familiar? Compared to European countries, China has a long way to go, a bit ironic when you think of China as a Communist Country, which of course it is not. They need to fix this issue too and hopefully will have better luck than we have had.

The governance challenge. Yes, there is a big governance issue. But I placed it last on the list. Why? Because for the average Chinese person this is simply not an issue. We have been told this again and again. Keep in mind that during their 2,500 plus year history, the Chinese people have never had a true democracy. They have no idea what they are missing or really how a true democracy works. What they do know, however, is that compared to what life was like before Deng’s reforms in the 1980s, they are far better off now. They have jobs, social and economic stability, good housing, freedom to travel, and yes, even freedom to express their opinion on virtually any subject provided it does not rise too far above the surface. So what if they don’t get to elect their leaders? As long as their leaders are doing a good job, isn’t that what counts? You could say that right now China is a “benign despotism,” the most efficient kind of “good governance.” Confucius would be proud.

But, alas, how do you assure that leaders will be enlightened forever, and how do you get rid of them when they aren’t? How do you assure an orderly and fair transition from one leader to the next.? How do you fight inevitable corruption, make necessary midcourse corrections and reforms? The Chinese leaders are struggling with this one. They look at the political system we have and what most of the developed countries have and conclude that it is pretty messy and disorderly and does not always produce good results. In fact, they may even conclude that democracy is the worst system ever created for governing. Except, of course, in the words of Winston Churchill (I think), when compared to every other kind of system we humans have come up with. Notwithstanding, they have to fix this one too. It surely will bite them if they don’t and could keep them from accomplishing all the other items on their ambitious agenda.

But you know what? The Chinese are smart. They are hard working and industrious. They have been around for a long time. They have had their ups and downs, the last two centuries being down periods. It is time for one of their up periods. They believe they can do it, and after spending a month here (I know, that is not very long.), I believe they can too. I am bullish on China. And let’s hope I am right because if I am not, we are all in trouble.

Now, off to the Hanjin Copenhagen for the penultimate leg! No internet  connections on board so the next post you get will not be until we reach Seattle around July 3 or 4. We have booked the train from Seattle to Chicago to DC, leaving on July 6 and arriving in DC around the 9th of July, if, as we say in Tennessee, God is willing and the creek don’t rise. Thank all of you who have followed us on the blog. As you probably can tell, I have loved doing it, as has Embry, and  knowing there are people out there reading it from time to time makes it a lot easier to keep going. But while our journey is nearing its end, I will have a lot of time on the container ship to try to pull some final thoughts together, so it ain’t over yet. Stay tuned…