This is a bonus post, since our boat was delayed for a day. Since Joe has been under the weather, I have had several additional adventures in Shanghai without him, and he suggested I fill you in while we are waiting to be picked up and taken to our container ship for the trip home. As before, I am typing straight from my written diary on these last days in Shanghai, starting with the evening of June 13.

I left Joe at the hotel—still feeling “wiped out” and nauseous—while I went with our guide, Vivian, who is wonderful, across town to an acrobatic show at the Shanghai Center Stage Theater. It was sort of like a mini-version of the opening show for the Beijing Olympics in 2010. There were about 7-8 different “acts,” all with amazing costumes and backdrop of a movie screen with beautiful scenery, which changed during the act to add to the atmosphere. For example, for a tumbling act the guys were dressed as warriors and had a war-like landscape in the background. For a romantic scene—with two incredibly graceful acrobats who had a dance-like act climbing up and down scarf ropes—you had a moon and star-lit background and romantic American music. (I was the only American in the audience, I believe; in fact they translated the introductory commentary into English, perhaps for only my benefit. This has happened several times for us here in China.) All the acts were very well choreographed. The most far-out act was the 8 men on motorcycles—real motorcycles—riding around inside a giant ball, which had been wheeled onto the large stage. They were going at an incredibly fast speed in there!

The next day Vivian picked me up to see some more of Shanghai.  First, we went to one of the most interesting things I had seen in China—the “marriage market,” which takes place each Sunday in one of Shanghai’s local parks. Thousands of middle-aged parents (male and female, and sometimes elderly grandparents with them)stand behind a written description of their child who is in search of a mate. The sign (usually without a picture/sometimes with) describes the young person with their age and height (always—tall height is respected here as a sign of higher social status). Other characteristics are also usually listed, such as his/her education, job, and/or place of residence. The sign may also indicate the characteristics that the parents are seeking in their child’s mate. They want the girl, for example, to be of a relatively young age, perhaps in order to be likely to produce their only grandchild.

The indications of social status seem to be the most important basic ingredient for finding the right mate. Of course, the basic characteristics of social status (particularly education) and financial means are incredibly important in the U.S. marriage market, too, but seem to be the dominant factor here. The typical bio-sketch on Match.com would always have a picture and emphasize a person’s “extra curricular interests.” (I don’t think the Chinese care about whether their child’s mate likes “walks on the beach at sunset.”)

The question, of course, is what about the young people themselves? They were nowhere to be seen, and  have nothing to do with this phase of the process. Apparently the parents try to find a few eligible young people they approve of  and then introduce them to their children, who then have a “blind date.” They are then free to say “yes” or “no,” or choose their own mate another way (but then have to deal with parental pressure, if the person does not meet their expectations). This system is the modern version of the past practice of “matchmaking” that was prevalent before the Communist era when women became free to choose their own mate and divorce, with the same rights as men to do so.

Next we went to a “silk museum,” which turned out to be primarily a shopping opportunity, but it also provided interesting information on the silk industry in China both historically and today. (A British guy who was there with his tour group told me how the British had “stolen” the knowledge of silk production and taken it to England in the 18th century where it flourished for a while in his home village.) I was a good tourist and bought a silk comforter and a beautiful silk jacket. My suitcase is becoming very hard to close!

Our last stop for the day was the Yu Garden, built as a “Classical Chinese garden” in 1559, during the Ming Dynasty. As with all classical Chinese gardens, it has incredible rock displays representing the mountains (One of the rocks apparently dates to the Song Dynasty, around 1000 AD, and was purchased by the rich official who built the garden.)

This garden also has a famous large dragon statue. I have been fascinated by this architectural detail (the dragon) that adorns many pagoda roofs, particularly in the Forbidden City. It is not only the dragon that usually appears, but also a parade of figures that are described to me as the “dragon’s babies,” which are gargoyle-like figures led by a dignitary riding a “phoenix.” The imperial buildings have the full parade—dragon, 9 dragon babies, and the dignitary—but any other building must somehow modify the ornamentation, or else I was told, “the emperor would come and kill him.” So in the Yu garden the enormous dragon has only three toes; otherwise it looks just like the dragon at the Forbidden City, only bigger!

Another architectural detail from the garden, but also from all over China, are the two lions guarding the entrance to many buildings. They look very similar, and we can see them all over the U.S. as well as you enter a Chinese restaurant, for example. But have you ever noticed they are different? One is female (on the left) and one is male (on the right). The female holds in one of her paws a baby lion (in various shapes and sizes, depending on the statue), representing fertility. The male holds a ball, which represents power. They both represent, more generally, “good fortune,” or in a broader sense, “peace, happiness, and well-being.” It’s nice that it is being wished to one and all anywhere you walk in China!

The final architectural detail that is almost 100% pervasive in old buildings of all kinds including temples and houses is the raised wooden “step” at the entrance to most rooms. However, you must never “step” on that “step” (bad luck). Women should go over it raising their right foot (“women are always right”) and men with their left, although this is not strictly observed. The purpose of this is to “keep good spirits in and bad spirits out.” This is yet again one of the many Feng Shui Daoist customs that pervade Chinese architecture. (Others include: (1) never put a mirror in front of the bed; you might mistake yourself for a spirit when you get up in the night; and (2) never have the bathroom door open into the entrance hall, because the bad spirits in your bathroom might greet your guests!)

The next day I went alone by subway to the Shanghai Museum, which is a lovely mid-size (and therefore very accessible) museum that shows only ancient Chinese art. It has wonderful well-lit displays and signage (in Mandarin and English). The amazing thing is that for the scrolls and manuscripts, the lights only come on when you are near the display. This protects the ancient manuscripts from deterioration. I concentrated on the paintings and ceramics. (I brought along my class notes from my Chinese art class to refresh my memory of each era/dynasty.)

Yesterday we were happy to have a “down day,” spent mostly reading and writing, hence Joe’s great blog post wrapping up our trip. I am reading a great book, Frog, by China’s Nobel Prize winner of whom they are very proud, Mo Yan. I am surprised that he is “officially accepted” and not locked up as is their Peace Prize winner. The book, a novel, is very critical of some of the events in 20th century China, and is beautifully written.

We did have two final adventures. The first involved exchanging yuan into dollars, since we need some for our expenditures on the boat. It was a long process involving a long wait at the bank and various forms to fill out. We concluded that not many people do this transaction (no other Europeans or Americans were in the bank). 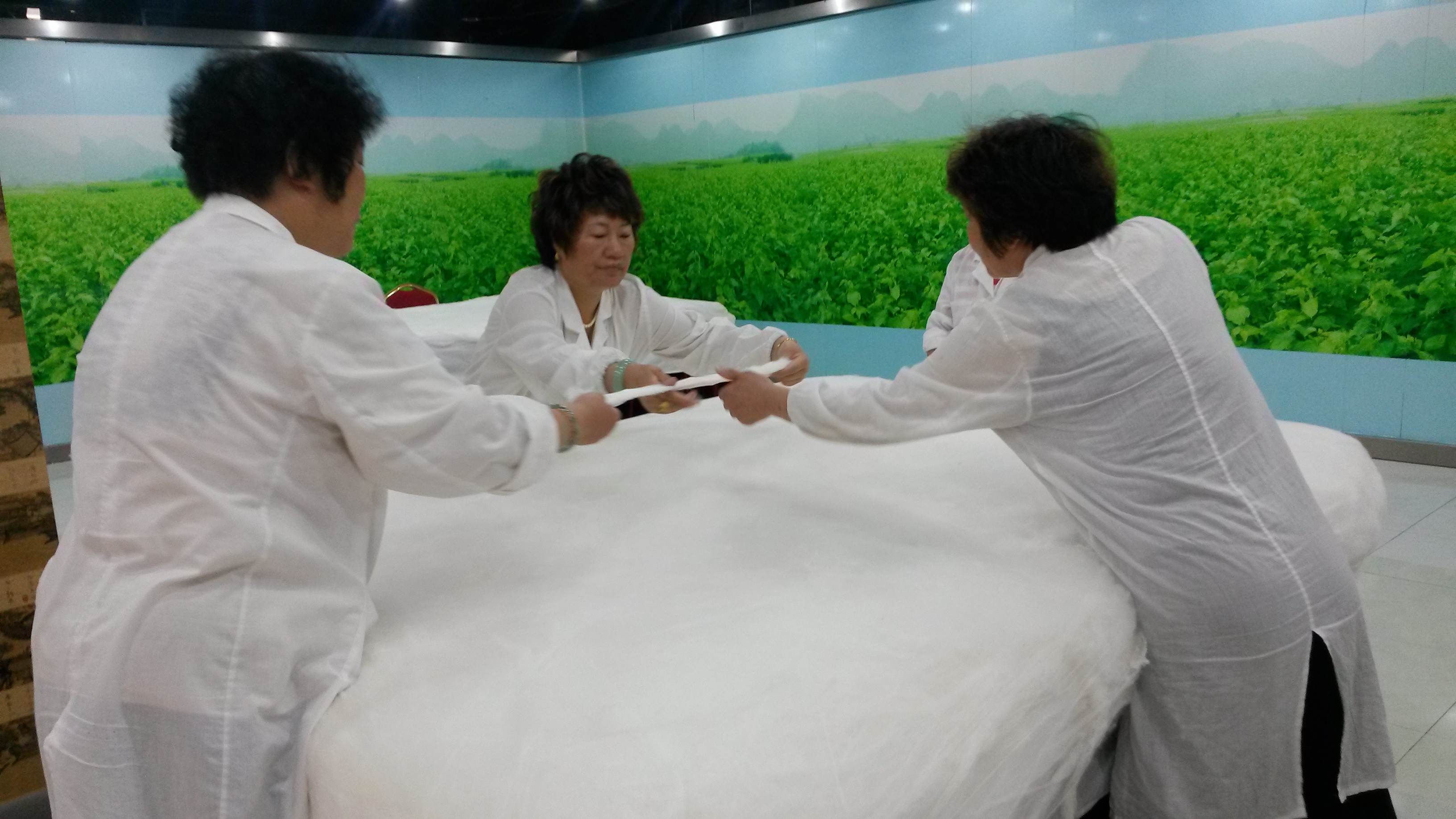 The final errand was to a jewelry store to purchase a ring for me to commemorate our trip and our 50th anniversary. I had noticed a large jewelry store on the big boulevard near the hotel and thought it would offer lots of choices. When we walked in, the atmosphere was a bit weird. We were the only customers in the large store, and there were about 12 salespeople so we expected someone to come right up to help us. Not so. They continued to chat with each other and ignore us. We walked around and looked at the merchandise, which was beautiful—all 18K gold (and up) jewelry of a variety of kinds. We were able (without help) to find the ring section and began pointing to a few. Finally, tentatively, one of the sales ladies (they all wore white uniforms) came up and opened the glass case with a key. Joe had his calculator, and they pointed to the prices, which were in numbers we could recognize. (All the signs were in Chinese.) I chose a pretty gold ring with six red stones. But what were the stones? No one in the store spoke a word of English, but by now all of them were gathered around talking loudly to each other exchanging ideas about what my question might be. Finally one got out her cell phone, which had a translator on it, and the word popped up “ruby.” I tried on the ring and it fit. Bingo! Joe gave them his credit card and a few minutes later I had my new wedding ring. Before we left, I gestured “50 years,” as best I could, and they got the message. There were a lot of smiles and thumbs up as we walked out the door.

That’s it for my final China blog post! Hope to see everyone soon on the other side of the Pacific.