It is May first and this is our second day in Berlin. It is time again to explore European health care.

I am sitting on the cold, concrete floor of the emergency room of Charite Hospital, which could be the world’s largest –and perhaps oldest —hospital, located in the former East Berlin sector. It is not about me or Embry. This time it is about John, our traveling companion, who, with his wife, Grace, has joined us for the Berlin and Warsaw legs. He has what he believes is possibly a serious infection (“cellulitis”) in his calf, a potentially dangerous situation which requires strong antibiotics to avoid calamity. Prospects do not look good for seeing a doctor any time soon. The lobby is crowded with around 50 forlorn people, and John has been standing for some time in a line that has barely moved . I just gave up my seat to a lady who appeared to be older than I am and indisputably in worse shape. 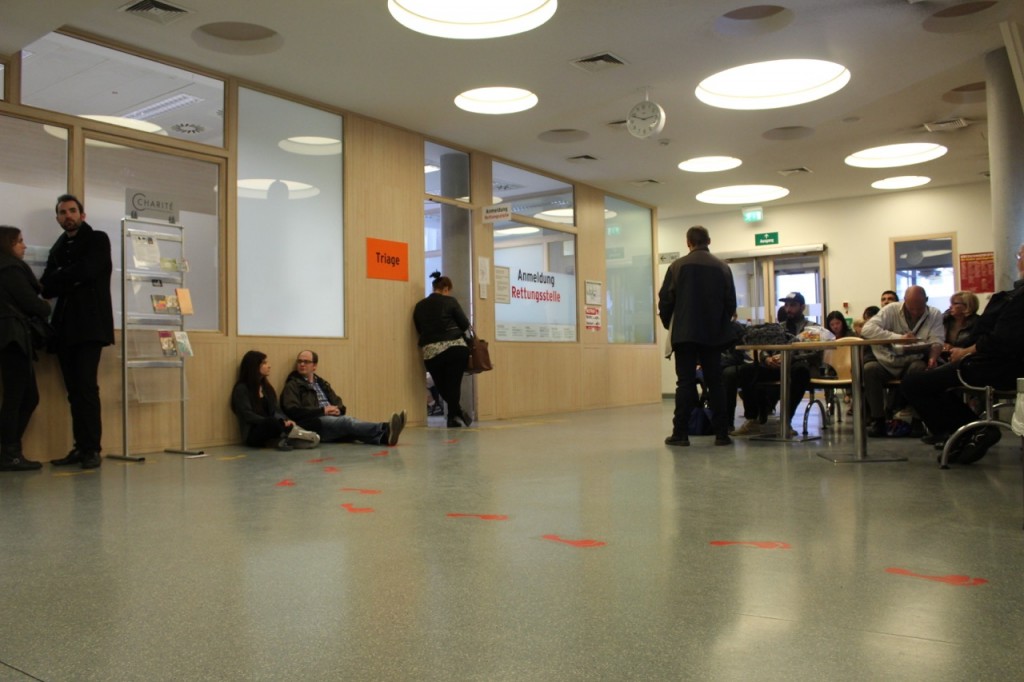 Actually the biggest challenge was getting here in the first place. We never dreamed it would be this difficult and certainly would not have been, had we just taken a cab; but we decided to take the metro (very similar to the French metro) and walk. (Embry and Grace were visiting museums, and based on Embry’s eye experience in Valencia, I naively thought we would be out of the hospital in time to join them for a late lunch.)

The hospital is like a small city with scores of buildings, resembling one of the ancient and now defunct mental institutions in the US. Picture “One Flew Over of the Cookoo’s Nest.” We wandered from building to building trying to find the emergency room, asking for directions along the way, when we could find someone, which was not very often. The vast campus was eerily quiet, almost disserted, due, I suppose, to the fact that May 1 is a national holiday in Germany, called “work day,” when everything is closed and almost no one works. Most of the people we asked did not speak English; and the few who did gave us conflicting directions. (One older guy, about my age, scolded us for not speaking German, “You are in GERMANY we speak GERMAN!”) My health app (on my replacement iPhone) showed we had walked almost six miles, a good portion of which was on the campus of this giant hospital.

John finally got to see the intake specialist, checked in and joined me on the floor. I thought it would take forever since there were a lot of people who had gotten there before us who had not been called; but in an hour, his name was called and he emerged from the small intake office 300 Euros poorer and with an appointment to see the dermatologist. We located the dermatology clinic in one of the smaller buildings, which like everywhere else we had been (except the emergency room) was deathly silent with virtually no sign of human life. In about fifteen minutes a petite, brown-skinned woman, probably in her forties, wearing a white doctor’s coat and a headscarf appeared, smiling and motioned for John to follow her. In thirty minutes he walked out with the order for the prescription he needed, and we were back to the hotel at five. John was very pleased with the treatment he received. The professionals were cordial, knew what they were doing and treated him kindly. High marks for the German health care system. 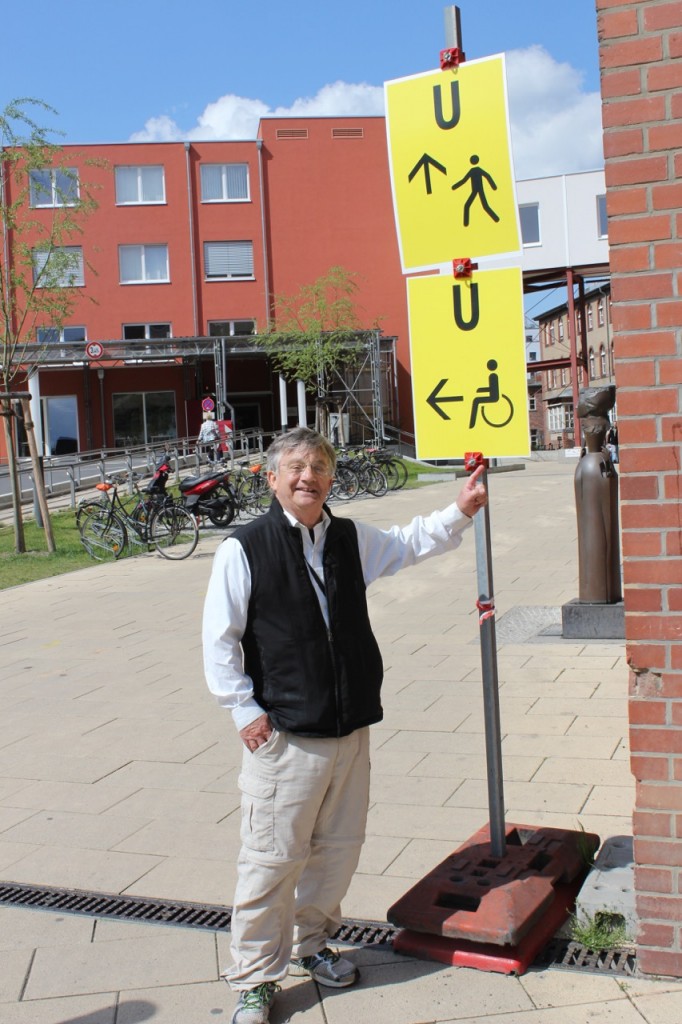 We had an excellent dinner at a small bistro last night and now are off to Poland. There was, however, a bit of frustration regarding finding the restaruant. The clerk at the hotel, a young woman in her thirties, had recommended a restaurant nearby and made a reservation for us. At the appointed time we came downstairs to the desk and asked her for the name of the restaurant and the address. She have us the name, which began with what sounded like a “V,” and when asked about the address, said, “It’s over there, you can’t miss it,” and pointed to her right. When asked about how long it would take to walk there, she said 15-20 minutes. Fifteen to 20 minutes meant it was a least a half mile, perhaps longer. In our view the instructions insufficient. So we asked again. She sighed and threw up her hands as if to say, how many times do I have to tell you.

So the new strategy was to take it one step at a time.

“Is the restaurant on the street the hotel is on?…No? Ok, is it on the next street? Okay, not there, what about the next street?” In asking these questions we determined that it was on a street beginning with a “G” and containing about six syllables and totally unpronounceable. And it was “over there you can’t miss it. Fifteen minute walk.” But not knowing the actual name of the restaurant or the whereabouts of the “G” street was still not enough, so we all just stood there, looking puzzled, staring at each other, at which point she sighed again and handed us a Xeroxed copy of a map that showed the exact location of the restaurant and its address (“Rotisserie Weingrun, GertraudenstraBe 35”) She gave one final sigh and a disgusted look that said, “Ok, so now are you happy?”

The food was terrific, better than any food we got at any of the restaurants we visited in France, and despite having to walk in the rain with no umbrellas, well worth it.

Another day with challenges, adventures and a happy ending.